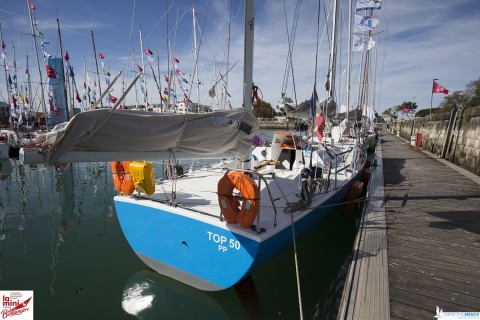 One of the "sheepdog" vessels for the Mini Transat. Photo © Christophe Breschi.

As is the case with every edition, there will be seven support boats in the Mini-Transat La Boulangère. Seven crews distributed amongst the whole of the fleet to keep an eye open for trouble, supply news of the fleet to Race Management, pass on any safety messages and possibly provide assistance in the event that a competitor triggers the alert. Accompanying the mass transhumance of the Minis towards the West Indies, the support boats also keep a check on morale.

They go by such names as Top50, Platine, Blanche Hermine, Cachaça or Clair de Lune. Their skippers are former Mini-Transat sailors, professionals seasoned in the art of delivery and those familiar with racing circuits, keen to share in this extraordinary adventure. “You are the eyes and ears of Race Management”. With the skippers of the support boats gathered together for a briefing, Race Director Denis Hugues highlights the duties of the crews who will be following the Mini-Transat La Boulangère.

Indeed, life aboard a support boat is no pleasure cruise. On-board, the crews will have to plot the positions of the competitors, ensure that they adjust their course in line with the requests from Race Management and provide information that is as accurate as possible regarding the atmosphere at sea, the conditions encountered and the skippers’ morale. In short, they must provide Race Management with everything they need to ensure they have their finger on the pulse of the leg underway at that present time.

It is a genuine combat device put in place by Denis Hugues for every edition of the race. “You need to know how to deal with different criteria: the boats’ speed, the crew’s understanding of the Mini-Transat, the skippers’ temperaments… Some are more ‘fiery’ than others. We have to take that into account when we divide up the support boats amongst the fleet.”

The first boat will maintain a link with the head of the fleet and back to around tenth or fifteenth place. “This is largely sufficient. If one of the lead boats has an issue, it will inevitably slow down. And it’s always easier to ask a support boat to move up towards the front of the fleet rather than turn back.” The other boats will be distributed in such a way as to try to cover the whole of the fleet of competitors. This is a fairly simple mission during the first leg, where the whole fleet remains relatively bunched together on the descent along the Portuguese coast, though it’s far more complicated during the second leg. “The lateral separation may stretch to over two hundred miles between those favouring a course close to the great circle route and those who dive south in search of the true trade wind.”

For the support boats, the day begins with an unchanging ritual. At 06:00 hours, universal time, the only time there is on the oceans, the radio link-up begins. Using VHF, the support boats call up the boats nearest to them to plot their geographical position and get their news. Those most familiar with the exchanges often reply with a laconic ‘Nothing to report’, whilst others, missing the contact with others perhaps, are tempted to recount their life story. And so it is that with each edition, the small community of Minis draw attention to the race’s ‘golden pedal’ at the finish. This has nothing to do with cycling of course. Essentially, they’re referring to the pedal on the VHF, which gives them the freedom to exchange with other people. The ritual will be repeated at 18:00 hours UT. At 07:00 UT, the support boats receive the positions from all the competitors, along with a grib file containing the weather information. The position reports are updated at 13:00 and 19:00 hours UT.

In the event of a particular hazard, a reported obstacle or deterorating weather conditions, the support boats can also pass on messages from Race Management. For the rest of the time, during each encounter, the support boats sound out what morale is like amongst the solo sailors they meet, try to collect a few anecdotes about life aboard and take some photos of the solo sailors in the open ocean in the hope that they won’t have to make any kind of intervention. Whilst the routine remains in place, it’s a sure sign that the race is going well…