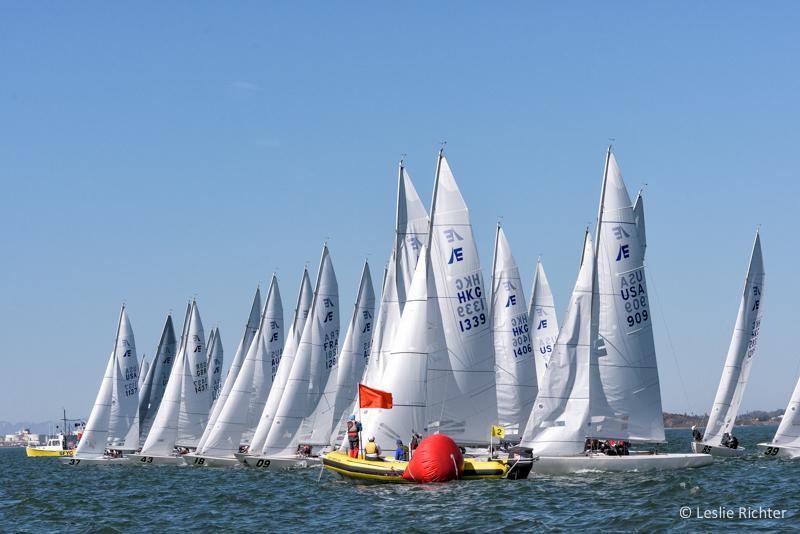 Mayhem on the starting line for the first start of the Etchells Worlds. Photo courtesy Leslie Richter

Belvedere, CA, September 26, 2017 – The first day of racing for the 51 International Etchells teams got off to a slow start with a 2.5 hour postponement on glassy water. When race one finally began at about 2:30pm, the wind had built to a consistent 8 – 10 kts. By the second race, the breeze freshened slightly to 14 – 15 kts. “The race committee, led by PRO Jeff Zarwell, did a great job completing two races in a short time window, getting everyone back to the dock before sunset,” said race co-chair Steve Fentress, and seconded by many racers.

“It was mayhem on the starting line because everyone is so good,” said Dirk Kneulman (BER), one of the three Etchells boat builders, and a previous world champion. “We had a bad first start but clawed our way back to finish in 8th. We had a great start in the second race, found a clean lane and were lucky to be the first boat to the windward mark.” Kneulman’s and his team of Grant Simmer and Mark Strube hung on to win the race and are standing in first place after day one. They lead Robert Elliott (GBR) and his team of Stuart Childerley and Tom Forrester-Coles by two points.

“This is the most competitive Etchells Worlds we’ve been to,” said Steve Benjamin (USA). “It’s just getting harder and harder.” Benjamin placed a disappointing 33rd in the first race and 3rd in the second race to finish the day in 16th place.

The top Corinthian team, sitting in sixth place overall after day one is Senet Bischoff with his team of Clay Bischoff and Ben Kinney.

Racing continues tomorrow through Saturday with a total of nine races scheduled. If seven or more races are sailed there will be one throw out.

For complete results, please see the event website at http://2017.etchellsworlds.org.