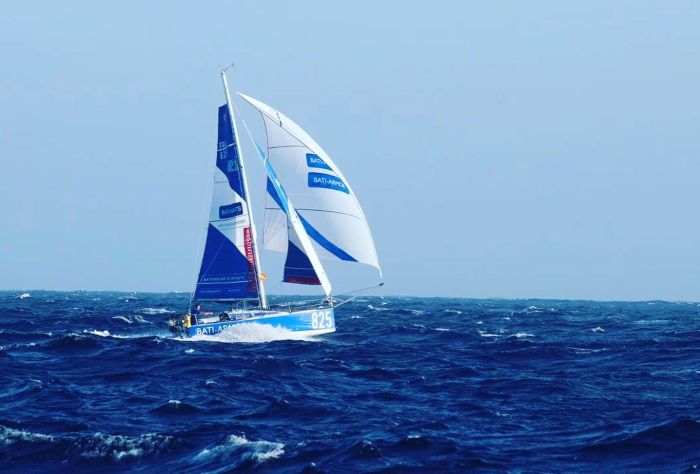 A little over 48 hours after the start of the second leg of the Mini-Transat La Boulangère (Las Palmas de Gran Canaria/Le Marin), everyone is positioning their pawns. With little information and few tools at their disposal, the sailors are having to decide which strategy they believe will pay off in the medium and long term: immediately favouring the West or investing in the South.

There’s been a high pace since Act 2 kicked off and the fastest competitors have already covered nearly 500 miles along the great circle route (direct course). This evening, the leaders are Ambrogio Beccaria (production boat category) and François Jambou (prototypes).

Sailing in the trade winds is no bed of roses. The competitors in the Mini-Transat are certainly posting good speeds downwind, but they’re having to deal with a shifty NE’ly wind both in terms of strength and direction (fluctuating a good twenty or so degrees throughout the day), in the knowledge that squalls may well colour play. As a result, the skippers are having to make the most of these shifts and perfect the timing of their gybes.

Which is best, South or West?

Two major options are taking shape on the Atlantic chessboard. The bulk of the fleet has chosen to head West. This course is closer to the great circle route, but with it comes the risk of getting caught in zones with lighter winds.

Other competitors have focused on making southing, lengthening the distance to sail in a bid to hunt down a steadier trade wind. For them, the medium and long-term challenge hinges on whether the strength of the wind will compensate for the extra ground they must cover.

The lateral separation between the competitors is constantly growing and this Monday evening the fleet is split across 350 miles from Briton Joe Lacey (963 Earlybird Racing) in the North to Sébastien Liagre (589 Walaby) in the South.

After a little over two days of racing, certain sailors have already been a little deserted, as is the case for Raphaël Fortes (858), Georges Kick (529) and Sébastien Liagre (589). Already the solitude is absolute for them as they’re not in range of anyone else in the fleet.

Meantime, others are making headway within very compact groups, including Thibault Blanchet (774), Thomas D’Estais (819), Thomas Gaschignard (539), Jean Bachèlerie (428) and Pierre Casenave-Péré (857), who are likely sailing within sight of one another. At the 16:00 UTC position report, these four skippers were bunched within just 2 miles of one another.

Jambou and Beccaria setting the pace

In the prototype category, François Jambou (865), Tanguy Bouroullec (969) and Axel Tréhin (945) are right where you’d expect them to be, in the podium spot once again.At the 16:00 UTC position report, François held a rather precarious lead given that there is still over 2,200 miles to go. Erwan Le Méné (800) is also lying in ambush, determined to be in the mix to win this second leg to Martinique.

Event favourite and winner of the first leg, Ambrogio Beccaria is bringing his A game once more. Since the start in Las Palmas he’s been posting rapid speeds and pulling all the right moves. Benjamin Ferré (902), Keni Piperol (956) and Guillaume L’Hostis (868) are doing their utmost to hang on in there, on a similar course to that of the Italian. Their pursuers are scattered to the North, a posse led by Paul Cloarec (951), and a more substantial group to the South, with the notable presence of Félix de Navacelle (916).

The production scows in the match

The competitors sailing on the production scow bows are making the most of the conditions that favour their steeds to front the chasing pack. Keni Piperol, Paul Cloarec and Guillaume Quilfen (977) are in the top 10. We also need to keep an eye on the southerly option adopted by Florian Quenot, who has been very quick since the start in Las Palmas. Indeed, he’s covered the greatest distance over the ground (prototype and production boats combined) with 608 miles devoured since the start (16:00 UTC today).

Marie Gendron hits the racetrack again while Jean Lorre enters the pits in El Hierro
At 22:30 UTC on Sunday night, Marie Gendron completed the repairs to her spinnaker pole and keel fairing and headed back out to sea, eager to try and make up for lost time. Later this afternoon though, Jean Lorre arrived in El Hierro, the smallest island in the Canaries archipelago, where he’s hoping to resolve an issue with his stay chainplate. Jean will endeavour to make it as quick a pit stop as possible, in the knowledge that he must halt racing for at least 12 hours in line with the regulations that govern this Mini-Transat La Boulangère.