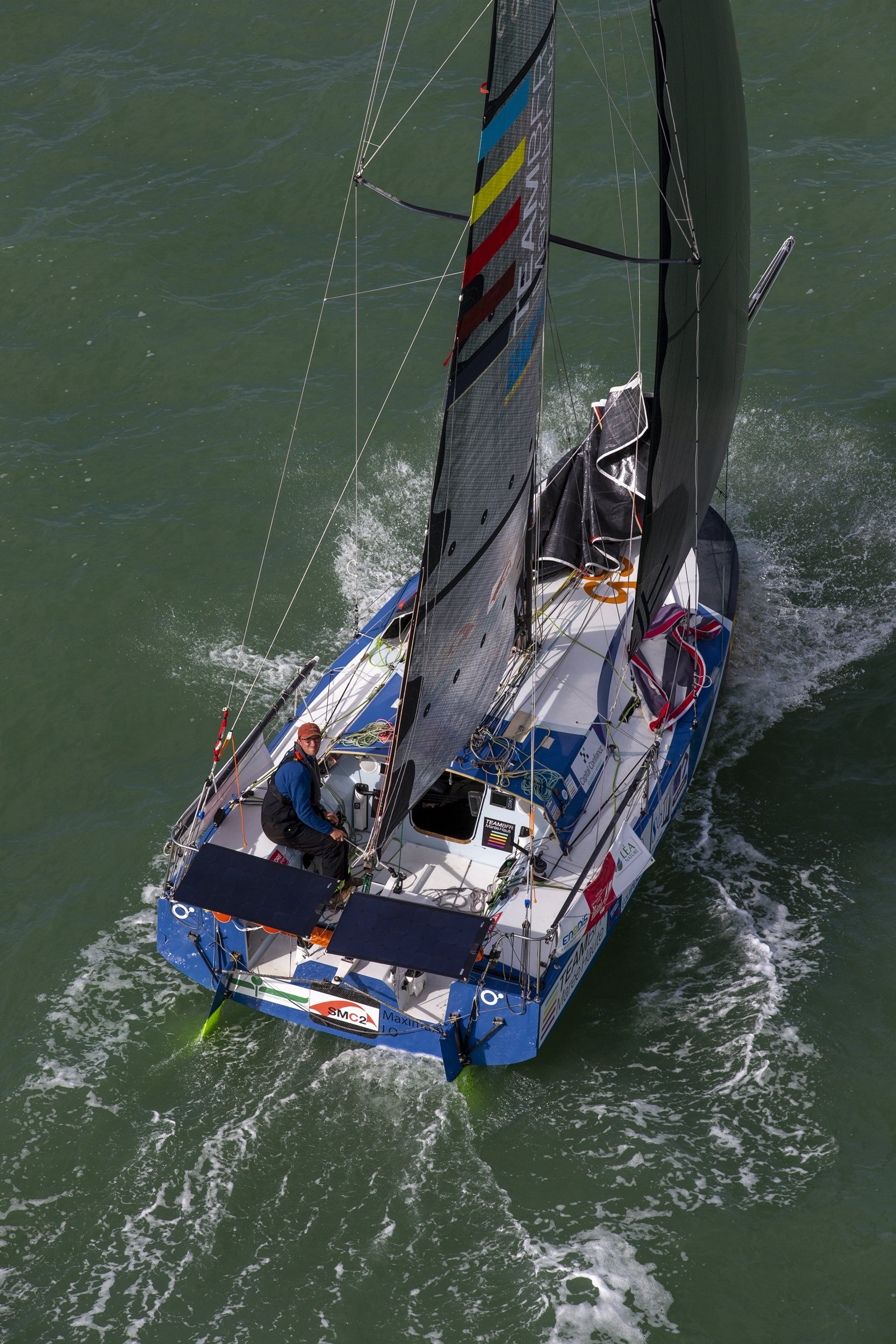 After three days at sea, the fleet of 82 sailors in the second leg of the Mini-Transat La Boulangère is complete once again after Jean Lorre’s return to the racetrack at the start of the afternoon. The speeds are steady, on a trajectory close to the direct route, pushed by a trade wind that should accompany them all the way to the finish.

The front runners might well make landfall in Martinique after just 11 days at sea… The eagerly awaited conditions for champagne sailing are upon them and the sailors are relishing their time on the water, albeit with a careful eye on possible broaches.

A rare occurrence worth highlighting is the fact that the leader of the production boat category (Ambrogio Beccaria) is hot on the heels of the first prototype (François Jambou).

The solo sailors competing in the second leg of the Mini-Transat La Boulangère are sure to have some tales to tell at the finish! “We’ve known since the start that the race could be very quick and that’s being confirmed. Even the support boats are finding it hard to keep up!” explains Denis Hugues, the Race Director.

Indeed, this second leg is certainly living up to the competitors’ expectations as it offers up a long 2,700-mile run, making good speed under spinnaker throughout. Florian Quenot (946) made the most of the conditions last night to shatter the record for the greatest distance covered in 24 hours on a production Mini 6.50: 291.47 miles at an average speed of 12.1 knots.

However, this high speed sailing is both exhilarating and perilous with an abundance of broaches and minor damage. A message received from the support boat Yemanja sets the scene: “There is still a sustained 20-25-knot NE’ly wind, the seas are fairly rough, not heavy but not ordered either. We have fine weather with a few low clouds. Some conversations over the VHF between Minis suggest that things have been pretty gruelling for them. The majority are sailing with two reefs in the main and a medium spinnaker or code 5. There’s a lot of talk about which route to choose…”

Talking of the route choices, it’s interesting to note that the competitors furthest North are tending to drop southwards to avoid some stormy zones that are set to develop from tomorrow.

For now, Ambrogio Beccaria (943) is today’s hot topic on his Pogo 3. Not content with stealing a march on his direct rivals, the Italian is also in a face-off with the most honed prototypes. In fact, this evening he is second overall, with only François Jambou ahead of him. The chasing pack is in hot pursuit but Ambrogio is assuming his status as favourite in stellar fashion, knowing full well that it wouldn’t take much to curb his fantastic progress.

It’s worth noting that behind the star Pogo 3s and production scows, certain competitors with older boats are enjoying a fantastic race, as is the case for Kevin Bloch (697), well placed in the Top 20 with his boat built in 2007. As for Jean Lorre (570), he’s been back on the racetrack since early afternoon after a pit stop in El Hierro to fix his stay chainplate.

There are also some small groups forming to cross the Atlantic in unison with seven competitors bunched into barely 5 miles from Thomas Gaschignard in 23rd place to Pierre Casenave-Péré in 30th!

Aboard the boat that is the current title holder for the event (in the hands of Ian Lipinski), François Jambou (865) is still in control of the fleet of prototypes. Finishing the first leg just six minutes after winner Axel Tréhin (945), François has now gained a considerable edge over his main rival (42.8-mile lead at 16:00 UTC). Tanguy Bouroullec (969), the third figure in this battle for gold, is some 16.9 miles shy of François.

The match for outright victory is sure to be prime viewing right to the wire. Astern of the top three are four competitors eager stay in contention: Erwan Le Méné (800) is right in line with the leaders, whilst Antoine Perrin (850), Morten Bogacki (934) and Fabio Muzzolini (716) have favoured some northerly separation.

Accessing the Mini-Transat from… Greece

Currently making 10 knots of boat speed, Greek sailor Markos Spyropoulos (931 Quanta) is lying in 15th place in the prototype fleet more than 1,000 miles North of the Cape Verde archipelago. So how did the Greek sailor get to the start line of this Mini-Transat La Boulangère 2019?

“Basically I’ve been a sailor all my life. I started when I was 10 back in Greece on very small boats and then 420s and then after university I started offshore sailing. I then took on the post of a sailing instructor before officially becoming a skipper in 1994, which I’ve done for the past 25 years. I’ve sailed all over the world. I think I’ve crossed the Atlantic 7 times now and I’ve been around the world once, but all that was on Maxi yachts like 60 to 100 footers. During this time, back in 2004, I was at anchor in the Cape Verde islands when I saw 2 Minis, who had stopped off there with problems and that stuck in my mind and I thought, one day, when I have the time and money, I have to do this race, so here I am! It’s a big journey to make it to the start line because I’m from far away and Greece is a poor country compared to France. I’ve met some very nice sailors within the Mini circuit from both France and overseas and they’re very kind and polite with us foreigners.

“I quit a very, very nice job and a good salary as the captain of a big sailing yacht 2 years ago to start this journey. Of course now I’m completely broke! I have managed to get some minor sponsors but it’s never enough really, but that’s okay when you’re doing something because it’s your passion. It’s a big sacrifice but, in the end, we’ll take back home with us all the happiness we were looking for. The skills involved in managing a Mini project are something that I feel I already have at my age.

“I am the second Greek sailor to have participated in the Mini-Transat, but the first one (back in 1983), quit the race on the first day as he wasn’t well prepared. I hope to be the first Greek sailor to finish the Mini-Transat. My boat is very well prepared and I feel like it’s at the highest level it has been in the 2 years since I bought it. I’ve done some really nice updates. It’s fully carbon and has a really good build quality but we’ll see how things go in this crazy race!

“Minis are fragile upwind, so we have to conserve them for the passage across the Atlantic. If it was just a race of 200 or 500 miles, it would be okay, but we have a long way to go. I have a 12-year-old son and I’ve spent most of the summer away from him. I’ve only had 5 days with him that whole time so I’m going to make up for that once I get to the other side of the big pond!”

A personal journey of discovery, Markos is also hoping his participation in the Mini-Transat La Boulangère 2019 will encourage the inclusion of offshore racing in the 2028 Olympics as well as bring the sport to Greece.