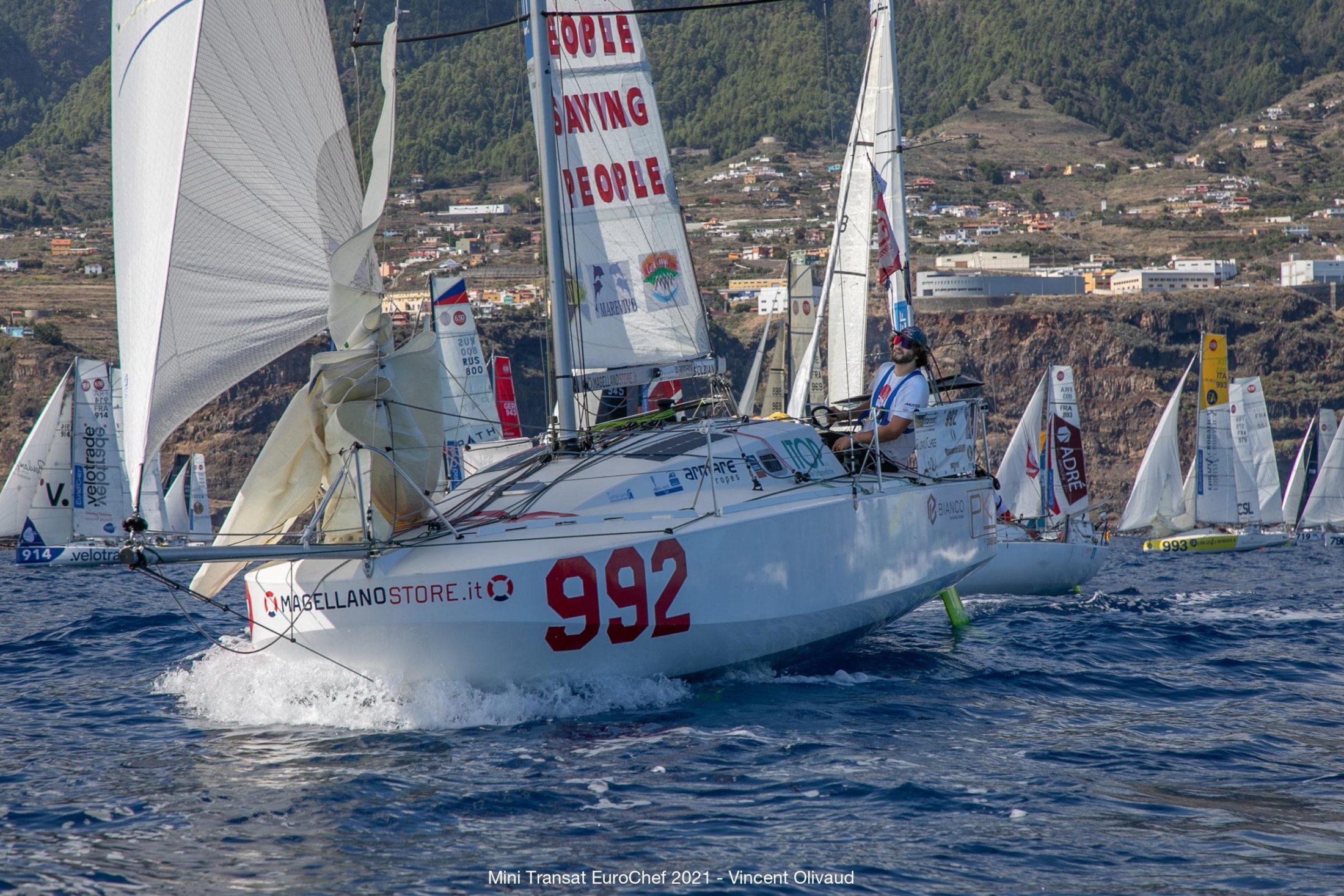 This Wednesday, with the competitors in the 23rd Mini Transat EuroChef strewn laterally across the race course for nearly 350 miles, it’s only natural that not everyone is enjoying the same conditions.

For those favouring the most direct route from Santa Cruz de La Palma to Saint-François, the wind is beginning to get very shifty and increasingly light. For the southerners, conditions are more consistent, but also and above all more stable. This will colour play still more from tomorrow and for at least 48 hours. Within this context, the front runners are likely to see the situation getting a bit tougher out on the racetrack, whilst the others should begin to harvest the fruits of their option at last, having initially accepted the heavy toll of losing ground in relation to the distance to the goal and to the leader board.

Though yesterday’s speeds were pretty much the same in both the north and south for all the competitors in the Mini Transat, slowly but surely we are beginning to see the bigger picture now. For the sailors positioned closest to the great circle route, the situation may well become considerably more complicated over the coming hours, especially so from tomorrow.

The reason for this is that on their current trajectory, the wind is gradually becoming rather patchy. This is evidenced by the speeds of the small group, which notably comprises Tim Darni (432 – So’Kanaa jus 100% naturel) and Stéphan Guérin (427 – Birvidik) in the prototype category, as well as Brieuc Lebec (914 – Velotrade), Cécile Andrieu (893 – Groupe Adré), Melwin Fink (920 – SignForCom), Lennart Burke (943 – Vorpommern), Federico Waksman (912 – Like Crazy Uruguay), Léo Debiesse (966 – Les Alphas), Jean-Marie Jézéquel (951 – FondApro) and Hugo Dhallenne (979 – YC Saint Lunaire) in the production boat category, which has been fluctuating between 3 and 9 knots since this morning.

And the situation is only set to get worse since ahead of their bows lie erratic light airs for at least the next 48 hours.

“Personally, I wouldn’t bet on their option. The trap they’re about to fall into was highlighted a few days ago too. It’s highly likely that they’re more focused on a game of tactics rather than strategy, but they’re at risk of paying a heavy price soon,” said François Jambou, title holder in the prototype category and currently in the midst of preparations for his Transat Jacques Vabre, which he will be competing in with Sébastien Audigane in Class40.

The amazing Arno Biston
This is a view shared by Ambrogio Beccaria, winner of the last edition of the Mini Transat in the production boat category: “The speeds of the guys in the north are increasingly irregular. They’re managing to get some little ‘boosts’ which the weather models weren’t showing, but that’s not going to last long. Perhaps they’ll manage to benefit from slightly more pressure than planned, but to my mind, the idea behind the southern route is more favourable.

“As such, I’m pretty impressed by Giammarco Sardi’s wake (992 – Antistene) and that of Arno Biston (551 – Bahia Express) even more so. Yesterday, he crossed in front of the group of leaders made up of Tanguy Bouroullec (969 – Tollec MP/Pogo), Fabio Muzzolini (945 – Tartine sans Beurre) and Pierre Le Roy (1019 – TeamWork), whose machines are the most modern and the most honed of the fleet.

“What he’s managing to do with his 16-year-old prototype is outstanding, especially when you learn that he only arrived on the circuit in the spring and was clearly having the toughest time of any of the sailors. Today, he’s demonstrating that he has plenty of pluck and is giving it his all. It’s great!”

Clearly the young skipper from Montpellier who cut his teeth in dinghy sailing and then in IRC on the Mediterranean circuit is not short of daring. Even after crossing back in front of the class’ big players, he’s still focusing on his own course and is following through on his decisions by continuing to drop southwards whilst the others seem to be more nervous about the prospect of dipping below the latitude of Cape Verde.

However, that may well be the spot where the exit signs are illuminated if we’re to believe the two former Mini Transat champions and the latest routing. The next 24 hours should give us a clearer indication.

Minor issues resolved
Elsewhere in the fleet, one event to remember is that Cyril Oms (591 – Fantomas) managed to hoist himself up his mast to laminate the lower spreader to port, which had been showing some signs of wear yesterday, and he has also switched his bobstay. Hélène Clouet (697 – Minus), who was up against it after her spinnaker wrapped itself around the forestay, seems to have remedied the problem and is now powering along again at an average speed of over 7 knots.

Finally, Camille Bertel (900 – Cap Ingelec), who scalded her foot with her Jetboil two days ago, is taking good care of her injury with ointment and is pulling out all the stops to get back on the scoreboard.