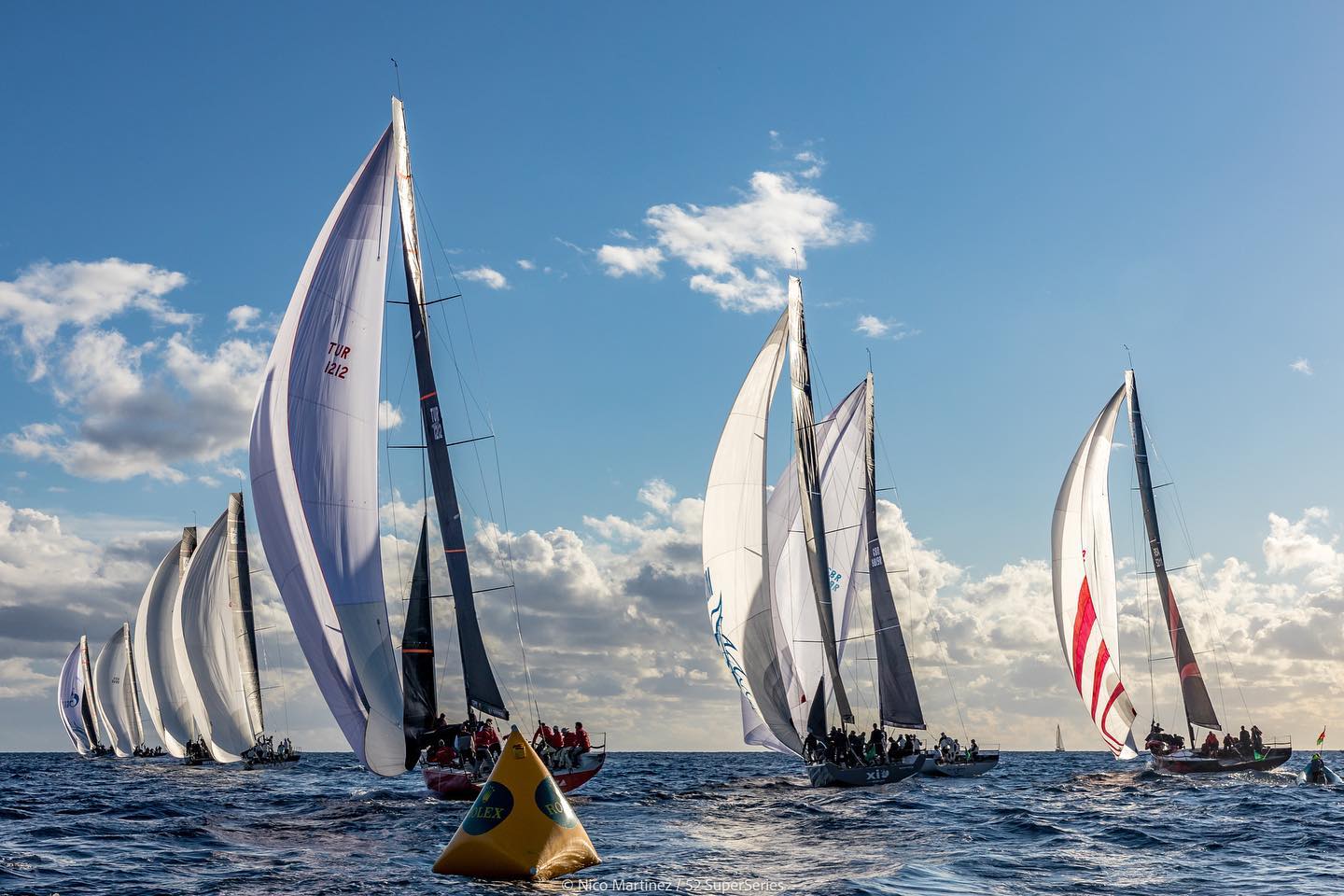 The wind strength varied from eight to 18 knots on day two of racing. Pic - Nico Martinez

Takashi Okura’s Sled crew, with six times America’s Cup winner Murray Jones on the helm and Italian ace Francesco Bruni calling tactics, won themselves a share of the overall lead of the Rolex TP52 World Championships on the Bay of Palma today after two of the most challenging but exciting races seen in recent years.

In the chase for the World Championship title they now share the same 15 points tally as the Plattner family’s Phoenix which followed up a golden, two bullets first day with a weighty sixth and seventh today. Phoenix actually still lead on tie break as a result of those two opening day wins.

Sled paired a race win to their fifth in the first of today’s pair of windward leewards. This sees them earn an equal share of the overall 2021 52 Super Series lead, locked on the same 60 points score as four times champions Quantum Racing.

With only three scheduled days of racing left of the 2021 season it could not be closer. Chasing Sled and Quantum Racing now in third are Phoenix, only two points behind.

In the very shifty, offshore breeze which varied in strength between eight and 18 knots over the course of the two races it seemed no lead was safe to the finish line. There were some very useful recoveries promoted by the clever use of the bigger puffs on the downwind legs especially.

Platoon, Phoenix, Alegre and Bronenosec perhaps rode the mental rollercoaster most. The South African flagged Phoenix were flat footed off the first start and rounded the first mark deep in ninth, recovering to sixth at the line.

The regatta leaders then found themselves on the wrong side of the opening beat on the second race, but they sailed an excellent first run to pass through the first leeward gate in third, chasing Quantum Racing and Platoon.

But typical of the wind conditions of the day, though the mean windspeed at the bottom of the second beat was 12-13 knots, the breeze then swirled, dropped, puffed up and shifted.

With the changes in pressure, the lead group compacted and regrouped. Sled broke clear and Bronenosec found their way back into the top three, Vladimir Liubomirov’s team leading Sled round the final windward mark.

The immaculate white hulled US flagged Sled stayed right of Bronenosec down the last run to take victory. Having dropped five places apiece in that unsettled mixed breeze, Phoenix then pipped Platoon on the finish line for seventh to Platoon’s eighth.

As is often the case Quantum Racing’s astute risk management, achieved under high levels of stress, ensured they earned a third and a fourth place that for all the world must have felt like a pair of victories for Doug De Vos’ team lead by Terry Hutchinson.

Sled’s visibly relieved helm Jones smiled, “It was an incredible day. We were up and down. We had two really good starts but even so we didn’t get to the top mark very well in either race the breeze was flipping all around the place. In the end we got back to fifth in the first race and we got to first t in the second race.

“We did a really good job on the second beat of the second race. We got Bronenosec on the run into the finish. Overall it was all about trying to stay in the pressure as well as the shift and I think the pressure was probably more important than the shift. It was about looking ahead and working out where was going to be the next pressure.

“There were 15 degree shifts so it was a big deal if you got pressure and a shift. There were big gains. And was for the circuit standings we were surprised to see at the end of today how we shape up but there’s still a long way to go.”

For Bronenosec an 11 points tally today made it yet another ‘woulda, shoulda, coulda’ kind of day, rueing a costly finish line penalty which required them to go round again to re-finish but also making the best of some of the opportunities that they created for themselves, finishing second behind Alegre in the second race. And Andy Soriano’s team also tasted the lows and the highs, winning the first race but finishing tenth in the second contest. It was that kind of day.

Bronenosec’s navigator Bruno Zirilli said, “It was one of the craziest days TP52 racing but I think this was normal given the breeze from the shore below the mountain with the puff and luls coming suddenly. Big ups and downs in the fleet. We sailed very well in the first part of the race being in front and then we finish 9th as we got a penalty right on the finish line, shit happens and today was our turn. Then we recovered in the second race coming second. This kind of up and down I think will continue throughout the week.”