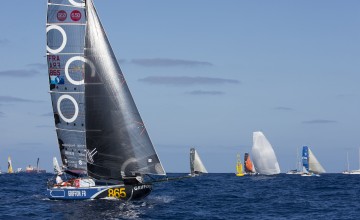 There are now six sailors making a pit-stop to effect repairs at Mindelo with the arrival of Thibault Michelin (Eva Luna), victim of rudder damage a few days earlier. A seventh competitor is set to join them shortly, Ambrogio Beccaria (Alla Grande Ambecco), whose boat has a broken bowsprit. He’s turned back to make for Cape Verde.

It must be a long time since the channel between Santo Antao and Sao Vicente has seen so much traffic. For the past twenty-four hours, there has been a steady stream of Minis creating a bottleneck in this little stretch of water with over fifty boats having now set a course for the West Indies.

However, before they can sample the delights of the long surf of the Atlantic swell, they have one last obstacle to negotiate: getting past the wind shadow created by the mountains of Santo Antao.

Whether it’s a question of character or a more long term strategy, two theories are clashing here. Those keen to take a gamble are gallantly trying their luck by opting to cut in immediately to leeward of Santo Antao, there where the cone-shaped wind shadow is at its narrowest point. The upshot of this is a rather tough section where the skipper has to know how to hunt down the slightest puff of breeze, but where the route northwards is freed up quickly. Some sailors have been revelling in this option, including Jörg Riechers (Lilienthal) on a prototype and Guillaume Combescure (Mini Oiri) on a production boat. The German sailor Lina Rixgens (Mini Doc) has also made this gamble.

For others, this choice has enabled them to benefit from a few hours of light winds to carry out repairs at sea without having to indulge in the compulsory pit-stop option and its subsequent time penalty. In this way, Yann Burkhalter (Kalaona) has been able to fix an issue with play on his rudder bearing, which had been forcing him to sail using the emergency tiller and hence hand steer for the bulk of the time. Similarly, David Allamelou (Boréal) has stopped in the open ocean to laminate his damaged bowsprit. In any case, traversing the zone affected by the wind shadow as perpendicularly as possible is the only solution possible to avoid being stuck fast for hours.

To gain ground to the west, head south

The other solution is to circumnavigate the wind shadow zone by bearing south the moment you exit the channel. Besides the fact that it’s a considerable detour, it comes as no surprise. In this way, Victor Barriquand (La Charente Maritime), Andrea Pendibene (Pegaso Marina Militare) and Luc Giros (Cabinet Rivault Nineuil – Enedis) have been ensnared by a zone of light airs around thirty miles to leeward of the dizzying heights of Santo Antao. Decidedly the road to the West Indies has to be earned this year.

At the head of the race, such problems are a distant memory for the leaders, who are now creaming along at an average speed of over 10 knots. There are no major shake-ups aside from the fact that in the production boats, Erwan Le Draoulec (Emile Henry) has snatched power just three miles ahead of Tanguy Bouroullec (Kerhis – Cerfrance).

Behind them, a battle royal is shaping up for fourth place between Pierre Chedeville (Blue Orange Games – Fair Retail), Benoît Sineau (Cachaça 2) and Thomas Dolan (offshoresailing.fr). This trio is grouped within a six-mile radius and the daggers are drawn.

Of particular note is the performance posted by Nolwen Cazé (Fée Rêvée), who has gradually moved up to the front of the chasing pack of pointy-nosed boats, accompanied by Mathieu Lambert (Presta Service Bat) and Frédéric Moreau (Petit Auguste et Cie). At the finish of the first leg, the young woman didn’t have enough adjectives to describe how happy she was to be at sea and now she has discreetly propelled herself towards the front of the fleet. Enjoyment and performance are indisputably linked.