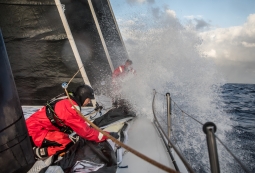 As the Volvo Ocean Race fleet continued to charge west at breakneck speeds on Tuesday, a crucial decision that could ultimately affect the overall outcome of Leg 2 was looming.

The seven teams have been treated to a wet and wild opening 48 hours to the 7,000 nautical mile stage from Lisbon to Cape Town, their biggest challenge to date. Boat speeds have been soaring close to 30 knots as the VO65s charge downwind on a tradewind-powered sleigh ride that has lasted since leaving Lisbon on Sunday.

But as well as having to deal with the physical demands of such extreme sailing, the Volvo Ocean Race crews are caught in a mental game of chess on water as they try to choose the ideal moment to head more directly south.

At 1300 UTC MAPFRE were showing as the lead boat with Dongfeng Race Team and team Akzonobel in second and third. But the reality at this stage of the leg is that official rankings come second to actual positions on the water relative to the weather that lies ahead.

The big decision revolves around whether it will pay to be further west or further south.

The fleet were today split by just 60 square miles, with MAPFRE opting for the more southerly route, while Dongfeng around 40 miles to their north west choosing the westerly option.

Not only must the crews avoid a huge wind shadow in the lee of the Canary Islands but also consider the best possible crossing point for the Doldrums, the ever-moving band of low pressure lying three-plus days away to the south.

According to Dongfeng navigator Pascal Bidegorry, the third night at sea will be crucial to the rest of the leg. “The plan is to catch maximum pressure,” he said. “To do this we have got to get to the west. We have to be careful about the shadow of the Canary Islands and Cape Verdes.

“Tonight will be key to the race, especially regarding our position to the west compared to the Doldrums. We have to make a good decision tonight.”

Describing the fire-hosing the teams are currently receiving, Bidegorry added: “There is lots of water around us – and on us. We are completely soaked outside and inside our wet weather gear.”

With a forecast for the breeze to ease over the next few days, the focus for each of the teams is to make as many gains as possible before they have to throw their cards on the table.

“The entire fleet has come to find this acceleration off Madeira and now we have to play with the wind shifts,” said MAPFRE’s Antonio ‘Neti’ Cuervas-Mons. “We have to gybe with every single shift and play with the stacking (sails on the windward side of the boat), and that’s really a nuisance since it is quite heavy due to the water all over the place. But hey, these will be a couple of hard days and then the wind will drop and everything will be calmer.”

The boats are given position reports only four times per day, at 0100, 0700, 1300 and 1900 (all times UTC). But once per leg, each team has the option to go into ‘Stealth Mode’ whereby its position is withheld from the rest of the fleet (and us) for three consecutive position reports. This can be used to tactical advantage to make a break for what is perceived as better wind, or to hit a layline, or choose what side to pass an island, etc. The only restriction is that teams are not allowed to go into Stealth Mode when they are within 200 miles of the finish. The approach to the doldrums is a classic opportunity to utilise this tactic. Watch for it over the coming days.

Race management has added a new ‘Ranking Waypoint’ into the tracker so that the rankings better reflect the tactical positions of the teams during the early part of Leg 2. Please note, this is NOT a new mark of the course that the teams need to pass. Instead, it is a virtual waypoint that has been added to the software that is positioned near the mid-point of the expected doldrums crossing point. This intention is to give a more realistic ranking through the approach to the doldrums as well as an updated distance to finish that is closer to what the teams will actually sail.