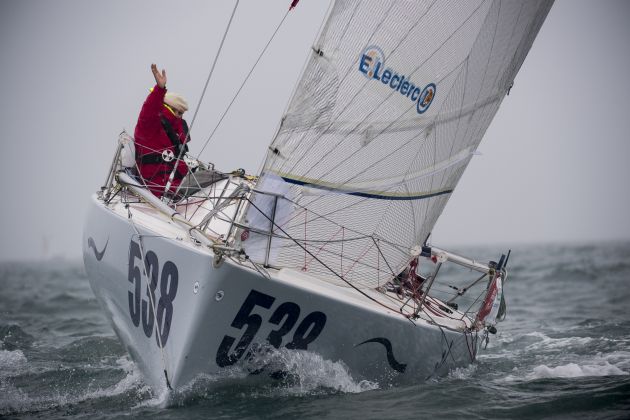 Luca Sabiu before he was airlifted from his Mini. Photo © Christophe Breschi.

Whilst making the most of the last puffs of downwind breeze and continuing to make headway towards the goal without losing sight of the potential options to come, the solo sailors will now have to switch from intuitive to cerebral mode, from a philosophy of “I am not afraid” to “which way is out…?” Indeed, singlehanded racing is all about being an all-rounder.

To stand a chance of winning an offshore race you need: a good boat, inevitably; hours spent on the water practising, talent and a sound work ethic, a touch of rashness and a big chunk of time to take stock…

Finally, you also need a bit of luck on your side, which is something that some sailors have been lacking, like Antoine Cornic (Destination Île de Ré), deprived of his autopilot and forced to dump his sails for a few hours each day so he can get some rest, or Pierre Chedeville (Blue Orange Games – Fair Ritail) once again. They are not alone in lamenting their share of technical glitches: Cédric Faron (Marine Nationale) and Camille Taque (Foxsea Lady) have big energy problems. Moreover, Camille has indicated to one of the support boats that she’ll regularly have to go hove to in order to get some rest. Finally, Lina Rixgens (Mini Doc) has broken the connecting rod between her two rudders.

Meanwhile, Slobodan Velikic (Sisa 2) is clearly making towards land. Race Management has diverted a support boat to identify the problem, however the Croatian sailor has not requested assistance. However, it is all over for Luca Sabiu (Vivere la Vela). Beset by recurring technical issues since the start, the Italian sailor set off his distress beacon last night and has been airlifted by helicopter to La Coruña by the Spanish Navy.

Meantime, also in La Coruña, the two skippers with damaged masts are busying themselves with effecting repairs and hope to head back out onto the racetrack as quickly as possible. From tomorrow morning, they’re likely to get a visit from a unit of ‘commandos’ made up of former racers and friends, with gifts ranging from lamination specialisms, to new shrouds, to multiple talents and plenty of goodwill… Certain pontoons in the port of La Coruña are clearly going to be a hive of activity.

A parting of ways?

Offshore of Lisbon, the fleet is beginning to re-centre itself after putting in a massive leg towards the south-west. The speeds are slowly decreasing, but progress remains perfectly respectable. Meantime, Erwan le Mené (Rousseau Clôtures) is heading back offshore again after a change of course earlier in the day. Most likely, the sailor from the Breton sailing hub of the Morbihan, suffered damage such as a broken spinnaker pole and was forced to head towards calmer waters temporarily. His outlay has ultimately cost him 40 miles in relation to the head of the fleet.

Among those competing in the production boat category, Rémi Aubrun (Alternative Sailing – Constructions du Belon) has opted to go it alone. Indeed, whilst all his pursuers are continuing to set a course for the south-west, he has opted to be the first to re-centre himself. This evening, the lateral separation between him and Erwan Le Draoulec (Emile Henry) is over 50 miles so it’s very much game on, particularly in light of the uncertainty clouding the coming hours.

For those back on dry land, the Mini-Transat La Boulangère is certainly no picnic. Parents, loved ones and partners find themselves frenetically checking the cartography, seeking out every bit of information that might be an indicator of a hazardous trajectory. You sleep with your phone to hand, just in case there is the dreaded call from Race Management signalling a problem on a boat. Tom Dolan’s partner must have had her heart in her mouth when the dreaded number appeared on her mobile. False alert: on the contrary it was to pass on a message, via a support boat contacted by Tom over VHF, wishing her a happy birthday. Now that’s what you call class!