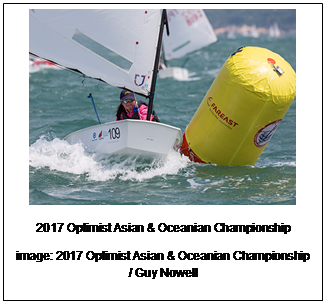 One hundred and thirty two entries from 16 countries battled it out over five days of racing this week in Hong Kong at the 2017 Optimist Asian and Oceanian Championship.

Six qualifying races for the Yellow and Blue fleets were sailed on Monday and Tuesday, followed by the 2017 Asia and Oceanian Team Racing Championships where Team China prevailed.

The first two races were sailed yesterday where Singapore’s Muhammad Daniel Kei Bin Muhammad Yazid, moved up from 4th to first overall after coming 1st and 2nd in his races. With a total of 28 points, he was 15 points ahead of his nearest competitor, Demir Dirk from Turkey, with China’s Xilun Lin following in 3rd overall.

Conditions for the final day were excellent, with 15 to 18 knots of breeze over the racetrack located off Stanley Bay. The Yellow Fleet was the first to the line with all racers getting away with a clean start.

Singapore’s Muhammad Daniel Kei Bin Muhammad Yazid sailed his way to 2nd place in the first race of the day confirming his position as first overall of the 2017 Asian Optimist and Oceanian Championship with a commanding lead of 16 points over second place overall finisher Demir Dirk, from Turkey, who finished 17th and 4th.

China’s Xilun Lin was only one point behind Dirik with a 17th and 2nd place finish today.

There was a massive sag line for the start of the final race for the Yellow fleet today, which resulted in Japanese sailor Koki Yasunaga having an excellent start at the pin and some of the sailors getting stuck in the middle of the line. Due to the great start, Yasunaga finished 10th in the race allowing him to jump 16 places to 19th overall.

Another sailor who catapulted his way up the ladder today is the 2017 Oceanian champion, Australia’s Toby Coote in 22nd overall, Coote jumped from 41st overall with a 5th and 6th place finishes today.

The top placed female sailor of the regatta is Singapore’s Faith Hailey Toh in 10th overall, followed by China’s Yiyin Zeng in 13th and Thailand’s Intira Panpiboon in 15th.

Host country’s Duncan Gregor finished 8th overall. Gregor will be competing later this year in the Zhik 29er Worlds, which will also be held at Middle Island.

Also maintaining the 3 top positions from yesterday in the Blue Fleet is India’s Navyn Prabhakar followed by New Zealand’s Sydney Cunliffe in 2nd. Cunliffe is also the top female sailor of the Blue Fleet. Chinese Taipei’s Yu Lin Yang is in 3rd overall.

The official prize giving will be held tonight at the championship base, the Royal Hong Kong Yacht Club on Middle Island. Champions will be awarded trophies made with up-cycled materials keeping in tune with the Sailors of the Sea, clean regatta scheme. We look forward to seeing the sailors return for the 2018 Asian & Oceanian Championship in Myanmar next November.