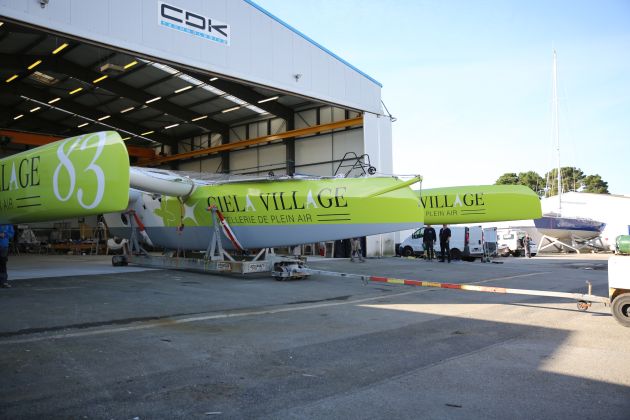 This 15-metre MULTI 50 trimaran will now begin her first sea trials in the Baie de la Forêt with a view to competing in the upcoming Transat Jacques Vabre.

It took 10 months, 20,000 man-hours and 15 people to successfully complete this build. With her sleek form inspired by the large offshore racing multihulls and a helming station that is well protected by a cuddy with clean lines, every detail has been studied at length by the designers, Ciela Village Team and the CDK Technologies design office, with a specific focus: weight saving and performance.

The addition of foils, which is an innovation now permitted by the Multi 50 Class rule, means that hitherto unimaginable speeds can now be achieved on this type of boat: 40 knots or 70km/hr!

The go-to yard for the class since its creation, CDK Technologies had already completed an extensive refit of the first Ciela Village trimaran (ex Crêpes Whaou 2), which resulted in a 2nd place for Thierry Bouchard in the Transat Jacques Vabre 2015. As such, there is a real synergy between the yard and the team.

Much more than simply providing a service, there is a genuine partnership between the teams at CDK Technologies and Ciela Village. The continuous exchanges between the members of the team (assisted in its choices by the multihull specialist Fred le Peutrec and préparateur Frédéric Bonnet) and the CDK Technologies design office, under the leadership of Michel Ollivier assisted by Capucine Cadiou, mean that Thierry Bouchard now boasts an optimised boat ready to put in her first tacks.

Following her launch on 4 October, the Ciela Village trimaran will immediately begin a period of fine-tuning. This will continue to be an intense period for the teams at CDK Technologies, who will be keenly monitoring the boat’s performance during the Transat Jacques Vabre, which is due to set sail from Le Havre in early November.