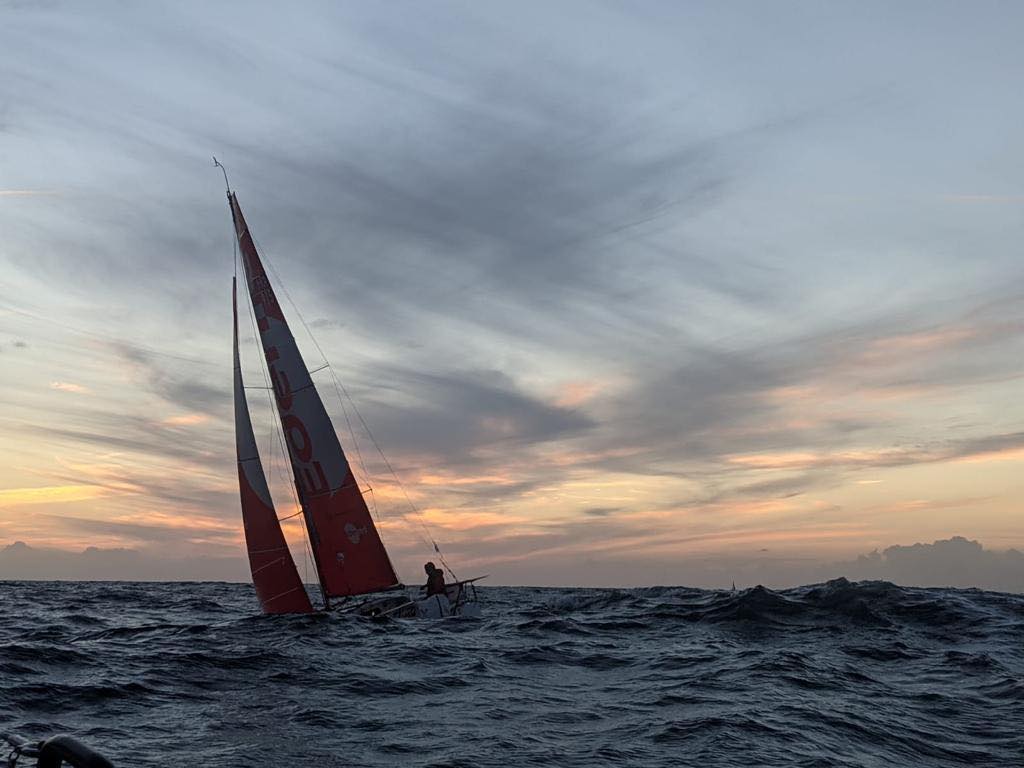 The competitors of the 23rd Mini Transat are experiencing all kinds of weather conditions. Pic - Toketa accompanying boat

While the front runners of the first leg of the 23rd Mini Transat EuroChef fleet, taking competitors from Les Sables d’Olonne to Santa Cruz de La Palma, have negotiated Cape Finisterre and are now powering along in the Trade Winds, the bulk of the fleet continue to make slow headway for the north-west tip of Spain.

The light breeze, combined with heavy seas, is hampering their progress. The competitors are trying to keep on top of their trimming and steering to make as much progress to the south as they can, as quickly as possible. It’s a sizeable challenge however, as a low pressure system is festering in this area and is set to generate boisterous conditions in the Bay of Biscay over the course of Saturday. As a result, the skippers will be better off if they’ve got the Iberian headland in their wake!

The wind is erratic in the Bay of Biscay and offshore off Galicia. In this way, the bulk of the peloton in the Mini Transat EuroChef is struggling to make headway. Some are clearly giving their all, focused on the trimming and the steering in race mode. Others, no doubt tired or located closer inshore where the wind is buffeting them, are finding it much tougher to get make headway in lumpy seas.

As a result, the fleet is now strewn across more than 190 miles and the deficits between the first and last boats look set to grow between now and the finish in the Canaries. Indeed, the leaders have now rounded or are about to round Cape Finisterre and are gradually managing to hitch a ride with the famous trade wind.

This steady NE’ly breeze should enable them to devour the miles to the finish in La Palma at a blistering pace, as is already being evidenced in the speeds posted by the first prototypes and that of Pierre Le Roy (1019 – TeamWork) in particular. The latter is currently hurtling along at an average of over 14 knots, whilst the majority of his adversaries are racking up single figure speeds.

At the latest polling, the skipper from Lille, who has sailed an absolute blinder of a course offshore of La Coruna, has really stolen a march on his pursuers with a lead of nearly 30 miles ahead of Tanguy Bouroullec (969 – Tollec MP/Pogo) and Irina Gracheva (800 – Path), who are sailing neck and neck, with Fabio Muzzolini (945 – Tartine sans Beurre) on the hunt not far behind.

Though the latter posse and a handful of other skippers will literally take off for the Canaries – where they’ll likely complete the 1,350-mile course that makes up this first leg on Sunday night through to Monday -, their fellow rivals won’t be as lucky. Some will have to contend with flukier conditions coloured by more transition phases. Others may well suffer the influence of another low-pressure system set to roll across the Bay of Biscay on Saturday.

According to the latest forecasts, this closed zone of low atmospheric pressure could generate a SW’ly wind of 30 to 40 knots. It goes without saying that this would make the situation much worse for those to the north of Cape Finisterre. Within this context, it’s advisable not to hang around. The skippers seem to have got the message through studying the daily weather report and the battle out on the water has stepped up a gear.

This is particularly true in the match at the front of the production boat fleet. Basile Bourgnon (975 – Edenred) and Julie Simon (963 – Dynamips), are racing within sight of one another. But their rivals are keen not to let them have all the glory. So, around ten boats are grouped within a radius of barely ten miles.

So, what else has happened out on the high seas? Cyril Oms (591 – 591 – Fantomas) and Nicolas Cousi (533 – Telerys Communication), each faced an issue with their mast base after the front rolled through on Tuesday night through into Wednesday, but have now managed to effect a repair. Camille Bertel (900 – Cap Ingelec) has broken her calculator and mast wand and is trying to come up with a solution with the help, via VHF, of her closest rivals.

Franck Lauvay (346 – Alice), who has been making headway under jury rig since yesterday, should be able to pick up a tow this evening from Adrien Hardy.

Finally, there is some good news regarding Marc-Eric Siewert (614 – Absolute Sailing Team). The sailor, who had disappeared from the radar screens due to a faulty tracker, has been located by Race Management thanks to the support of the French Navy who dispatched a plane to the zone. The German sailor is continuing on his way without incident and is currently 185 miles off Cape Finisterre, around 25 miles behind Briton Piers Copham (719 – Voiles des Anges). He should be visible on the cartography again from the 18:00 hours polling.