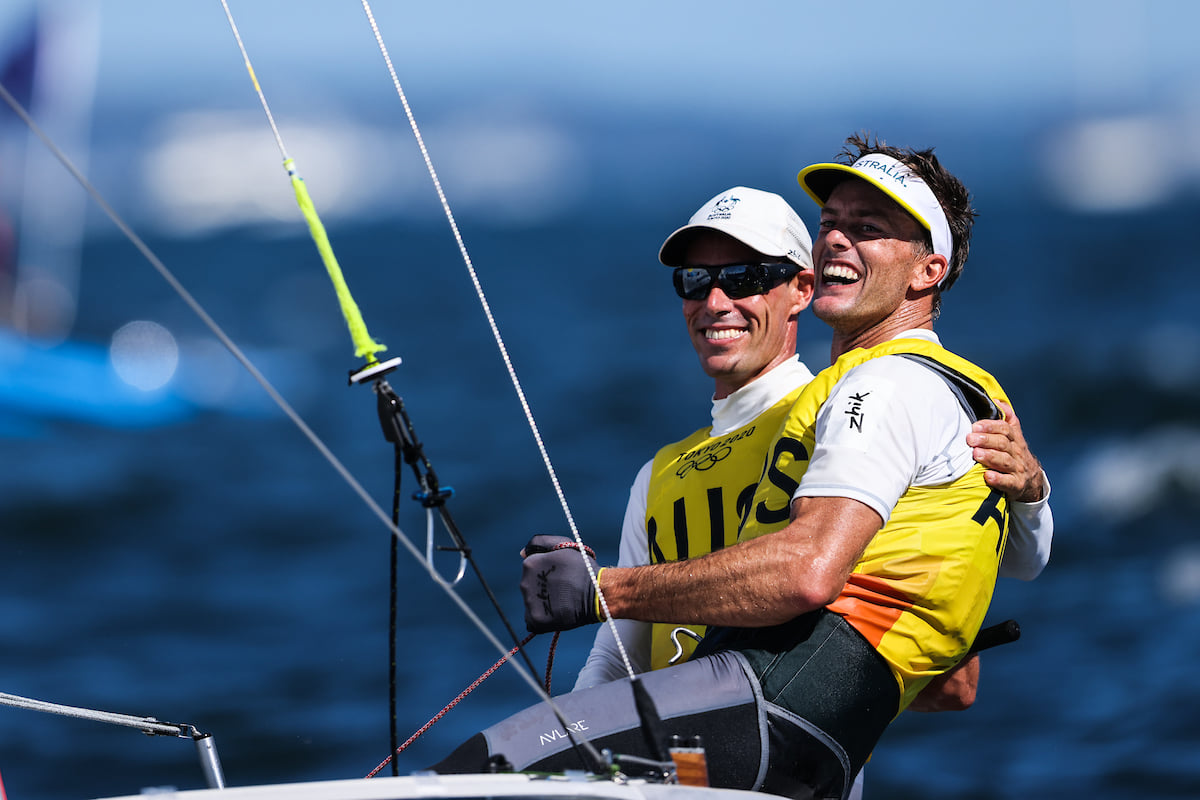 Mat Belcher and Will Ryan won their first Gold medal as a team at the Tokyo 2020 Olympic Games. Pic - Sail Energy / World Sailing

Three-time Olympic medallist in the 470 class, Mat Belcher, chatted to me from the Gold Coast, where he is winding down with his family following a successful Tokyo 2020 Olympic Games.

For Belcher, Tokyo marked the end of his 470 partnership with Will Ryan as the class will be mixed at Paris 2024.

Bearing the national flag for the Australian Olympic Team at the Tokyo 2020 Olympic Games Closing Ceremony was a full-circle experience for Men’s 470 skipper Mat Belcher.

The 39-year-old also carried the Australian flag at the Sydney 2000 Closing Ceremony as an 18-year-old.

“It’s funny how things pan out,” Belcher said during a phone interview from his home on the Gold Coast.

In Tokyo, Belcher, the most decorated Australian sailor in Olympic history, followed in the footsteps of his former 470 partner Malcolm Page. Page carried the flag at the 2012 London Olympics Closing Ceremony following the pair’s Gold medal win.

“I was speechless for sailing to have two flag bearers over the three Games,” he said. “Walking into the stadium, you get goose bumps. And to walk around the stadium and feel that energy, whether there’s a crowd there or not, it’s huge.”

It was fitting for Belcher to be chosen as the flag bearer, as his sailing career has been defined by the Olympics.

“My sailing career’s really gravitated and really focussed on the Olympics,” Belcher said.

“I love what the games represents. I love that personal drive, that four-year focus. I love that I can be so passionate about it, it’s not about a ‘job’ for me, I just love racing in that environment. I love being part of the bigger team. The 470 is such a challenging boat – it’s different every day.”

Belcher has competed in three Olympic Games. In London in 2012, he and Malcolm Page won Gold, in Rio de Janeiro in 2016 he and Will Ryan won Silver and in Tokyo 2020 the pair won Gold.

Silver at Rio was a huge achievement considering the ‘co-curricular activities on land’, including protests and equipment damage that prevented the sailors from getting the job done properly on the water. Still, they managed to clinch the Silver from the Greek team, which gave them the push they needed to go for Gold in Tokyo.

“We were able to draw on the lessons from Rio, and the focus for us was clear – the goal was to win,” Belcher said. “We really wanted that top spot.”

In the lead-up to Tokyo, the pair faced challenges caused by Covid-19. Their training schedule, of which 80 percent was usually spent overseas on the European circuit, had to be transformed. They also live in different states, which meant working around border closures.

However, they did have one advantage over their rivals. Having formed a partnership with the Japanese sailing team prior to Covid-19, Belcher and Ryan had become familiar with the Olympic venue, Enoshima Yacht Harbour.

Their big fear, Belcher said, was that they wouldn’t be able to maintain “efficiency and effectiveness” training at home after the pandemic hit.

“Will and I were trying to lead a lot of these areas (speed, start, etc.) across the fleet. Coming into Japan, we followed up on what we believed in. Even though some of those areas weren’t 100 percent, we still had the confidence to follow our plan.”

Their plan worked. They finished in the top five in all but one race at Tokyo to secure the Gold medal before the final race. Coincidentally, Australian Laser sailor Matt Wearn, did the same days earlier.

To top off it off, Belcher and Ryan completed the race in style. Starting on port tack, the pair passed behind the Swedish team and soon found their ‘lane’, taking them to the top of the fleet.

When asked how he felt as they crossed the finish line in first place, Belcher said, “Relief.”

He continued, “We were so happy we were able to go one step more than Rio. Those five years of training, everything we put on hold – the family and financial sacrifices we made – [paid off]. To achieve Gold – I’m really proud of Will and I, and being able to put it all together when it counted.”

Overall, Belcher and Ryan finished an astounding 22-points ahead of second place.

Following the final race, Belcher and Ryan were approached by the Spanish team. Ecstatic over their Bronze medal win, Jordi Xammar and Nicolas Rodriguez Garcia-Paz playfully pushed Belcher into the water. Silver went to Sweden’s Anton Dahlberg and Fredrik Bergstrom.

Belcher said it was wonderful to medal alongside the same teams that made up the top three at the World Championships in 2019.

“It was fitting to finish like that and the realisation that we’re not going to be able to compete like that together again. It was a touching moment for all of us.”

Integral to making the gold medal a reality was coach Victor ‘The Medal Maker’ Kovalenko (OAM), who has coached and supported Belcher for 21 years.

Belcher’s Tokyo medal will join his other Olympic medals in a display cabinet at Southport Yacht Club, his home club for more than 30 years, to inspire young local sailors.

Belcher isn’t ruling out another Olympic Games, but for now he is enjoying a well-deserved break with his wife Friederike, who represented Germany at the 2012 Olympics in the Women’s 470, and sharing his love of sailing with their children Anton, 8, Amelie, 5, and Zoe, 2.

Belcher will always have an interest in the 470 class, and supports the Mixed 470 class at Paris.

“The class is becoming more physical, super professional, and [I believe it] will really thrive,” he said.

In the future, he hopes to compete at the 2022 Etchells Worlds in Cowes with Martin Hill and Julian Plante, with whom he won the event in 2018. And, fingers crossed, he will get to sail in his first Sydney Hobart Yacht Race on Matt Allen’s two-time winner, Ichi Ban.

Belcher also has plans to sail again with Ryan, but not in the 470 class, saying he will always cherish the strong partnership the pair had, strengthened by the intensity of their shared Olympic experiences.

He said he would never forget the Tokyo Medal Ceremony, conducted under Covid-19 restrictions, where he placed the Gold medal over Ryan’s head first.

“Will had been waiting so long for that medal,” Belcher said. “There was a really good synergy and good trust between us. We’re a really strong partnership and good friends and to achieve what we achieved together was awesome.”