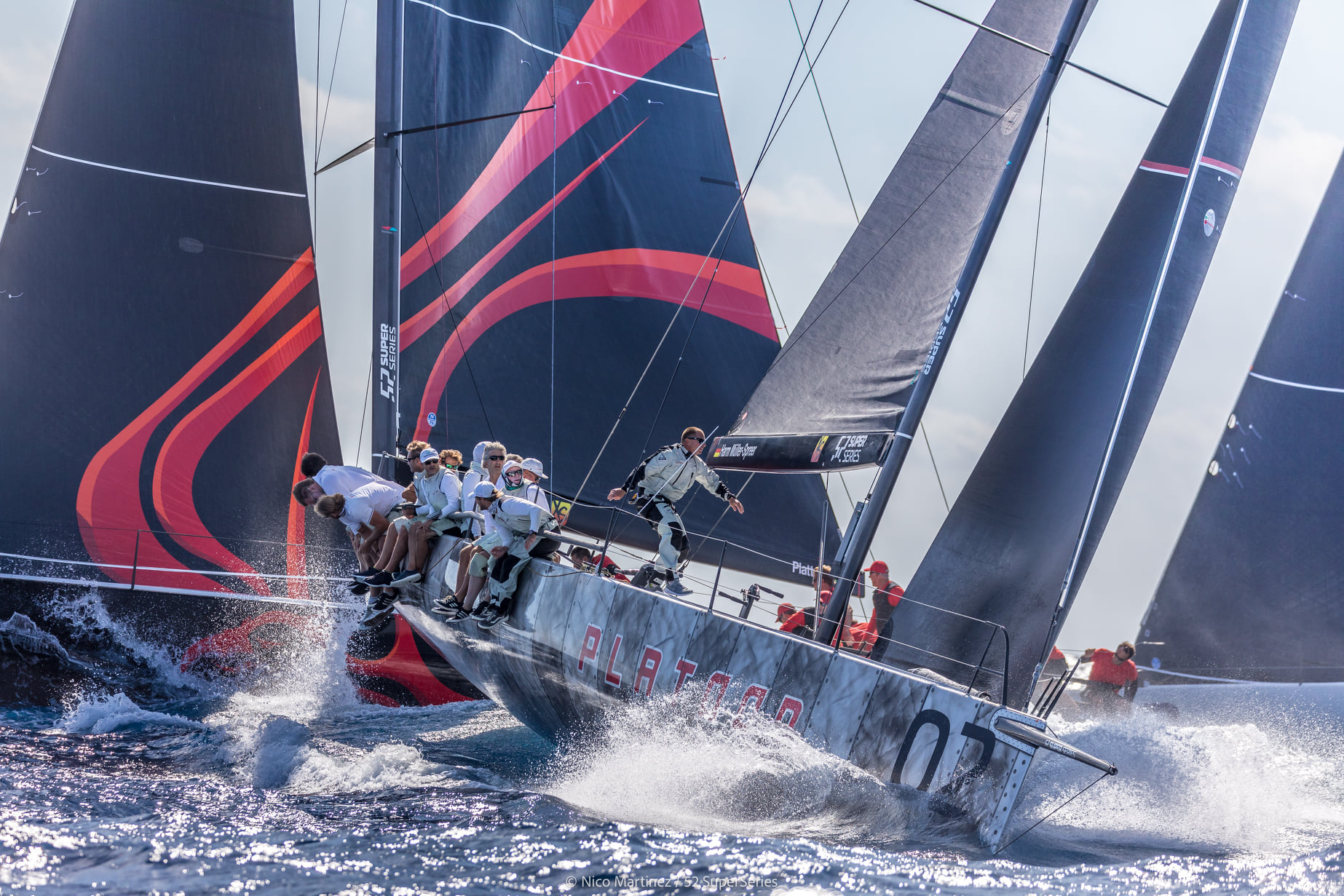 Platoon has a 2-point lead at the 52 Super Series Menorca. Pic - Nico Martinez

Harm Müller Spreer’s Platoon crew, who won the event in 2019, took the lead at the Menorca 52 Super Series Sailing Week after a fourth place and a race win saw them overtake Andy Soriano’s Alegre on the overall leaderboard.

Alegre faltered with a seventh and tenth, which halted their opening run of three back-to-back winning guns.

The day marked the return to form of Quantum Racing, Doug DeVos’s four times champions starting much more smartly after a difficult pair of opening days. Platoon also hit their straps, as did Bronenosec, the Russian flagged team which has an all Italian afterguard, navigator Bruno Zirilli, tactician Vasco Vascotto and strategist Pietro Sibello.

It was the best day of racing yet this season, even if the 14-17 knots was shifty, difficult to read and the seas state bumpy with an awkward chop at times.

In both races the early leaders were able to extend and win relatively comfortably. Victors last month in Puerto Portals, Mallorca Sled – racing with Francesco Bruni calling tactics – picked up the breeze shifting to the right and were able to lead the fleet around the top mark and extend from there.

Regatta leaders Alegre – who are missing key trimmer Andy Hemmings after he suffered from a knee injury during Wednesday’s racing – started underneath Bronenosec and could nor break clear of them to get to the right shift until it was too late. They worked hard for a seventh but in the next race suffered early on too at the hands of Gladiator.

From being able to dictate terms to the fleet Alegre were back in the heavy traffic today. Losing ninth position to Interlodge at the finish line cost them one more point and they go into the two final days two points behind Platoon.

Platoon started well in the second race of the day and this time they were clear leaders by the first windward mark, Quantum Racing holding second all the way round the course to the finish line. A 2,2 day for the American flagged team sees them third overall five points behind their Quantum powered rivals with whom they share a two boat programme.

“It’s been a tough week so far so it was good to have a better day. It is very shifty out there, very puffy with big waves and so Harm really did a good job steering the boat, we were good downwind and had good strategy upwind,” said Platoon’s British navigator Jules Salter.

“It is hard to realise we are leading now, it is all about a point here and there, and there is plenty more racing to come.”

Michele Ivaldi, the navigator on third placed Quantum Racing said, “We set a goal for the day and we succeeded and everything has opened up again, but all the time it is about taking each race at a time and not thinking about the outcome Saturday.”