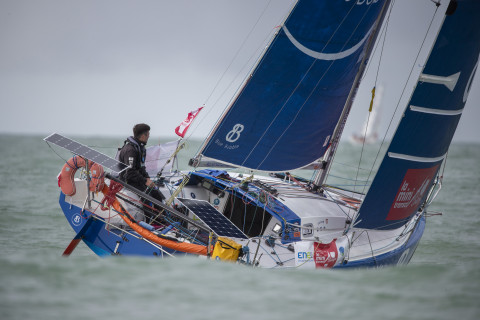 Yann Blondel is the latest to abandon the race

We are about to witness the conclusion of this first leg of the Mini-Transat La Boulangère; and it is a tense finale, as the breeze is very light and fades away to nothing at times on the outskirts of the Canaries.

In the prototype category, François Jambou has a slight edge this evening, but Tanguy Bouroullec and Axel Tréhin remain poised to attack at the mere sniff of an opportunity.

In the production boat category, it’s a nail-biting battle between Ambrogio Beccaria and Félix de Navacelle, and their pursuers are waiting in ambush.

The first prototypes might well conclude this battle tomorrow afternoon and the leaders on the production boats on Monday morning. Following the retirement of Jean-Baptiste Ternon this morning, the third since the start of the race a week ago, 84 competitors are still racing.

One can well imagine that after a week of demanding racing, the final of this first leg will require the competitors to dig deep into their mental and physical reserves. Clearly, as they approach the finish, the sailors are running on adrenalin and excitement pure and simple.

One needs nerves of steel and confidence in one’s choices because, pinned to the spot in a light patch of breeze, it’s easy to imagine one’s rivals making good headway in a little vein of breeze…

To make matters worse, the sailors have no way of knowing exactly where their playmates are. One thing for sure, is that the skippers will be fully focused on the final sprint and nailing the best possible result, before they can turn their attention to the warm welcome and the festivities that will be reserved for them in Las Palmas de Gran Canaria.

Game on for the opportunists
In these super light conditions, the routing is often optimistic so it’s hard to give a precise estimate about the different finish times. The last few miles are likely to be long and laborious for the leaders.

One might hazard a guess that the first prototypes will make landfall tomorrow afternoon and the leaders in the production boat category Monday morning, but some might describe this as pure supposition. With downwind conditions set to kick back further down the line between Madeira and the Canaries, we can expect a flurry of finishes on Monday and Tuesday.

Among the prototypes, François Jambou (865) has less than 100 miles to go now (96 miles at the 16:00 UTC position report). In a well-established trade wind, this distance could be lapped up pretty quickly. However, in the very light airs he’s encountering, it could be another story entirely.

With a 30-mile lead this evening over his closest rivals, Tanguy Bouroullec (969) and Axel Tréhin (945), François has some room for manoeuvre and looks like he may be hard to catch. But in sailing you can never say never of course.

In the production boats, it’s incredibly tight between Félix de Navacelle (916) and Ambrogio Beccaria (943). Slightly over to the East, Julien Letissier (869), is totally in the match too and may well be able to reap the benefits of this positioning.

A solid group of boats remains in ambush too with Matthieu Vincent (947), Guillaume L’Hostis (868), Amélie Grassi (944) and Nicolas d’Estais (905) all eager for a share of the spoils. To make a difference in this situation, it’ll be important to be opportunistic!

Of the 87 sailors who took the start in La Rochelle last week, 83 are still racing. This morning, Jean-Baptiste Ternon (880) announced his official retirement to Race Management. On a pit stop in Muxia, he was unable to resolve his energy problems. He’s the third sailor to retire from the race after Czech skipper Pavel Roubal (908) and Jonathan Chodkiewiez (958).

David Kremer (260) has repaired the transom on his prototype after an epic pit stop and a helping hand from two mates. He’ll be thrilled to have relaunched the boat and left the pontoons of the port of Baiona. Demonstrating great seamanship, he’s anchored up in the bay, alone waiting for a front to roll through before continuing to make for the Canaries, once the wind has shifted round to the north-west.

As for Yann Blondel (Blue Bubble), he has safely arrived in Leixões, Portugal, where he intended to resolve his issues. However, his problems are diverse (broken bar axis, loss of driver and energy) and complicated to solve in the allotted time, so he becomes the fourth abandonment after Pavel Roubal (908), Jonathan Chodkiewiez (958) and Jean-Baptiste Ternon (880). There are 83 sailors left in the race.

Among the other sailors encountering technical issues but not planning to make a pit stop are Spaniard Miguel Rondon (energy problems), Pole Michal Adam Weselak (broken bowsprit attachment) and Clément Machetel (who’s trying to repair some kind of damage he is yet to detail).