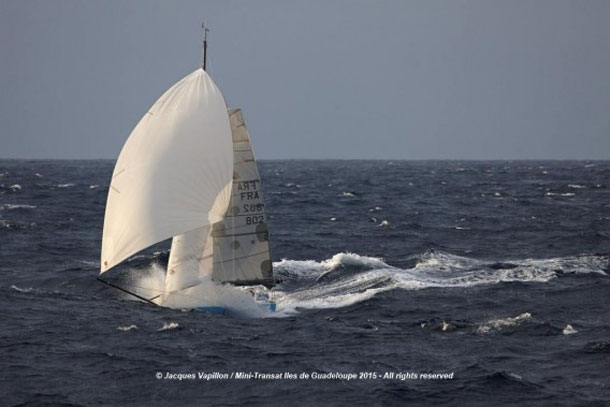 At the head of their classes, Davy Beaudart (Flexirub) in the prototypes and Ian Lipinski (Entreprises Innovantes) in the series class, continue to widen the gaps in the last hours of the first stage of the Mini Transat îles de Guadeloupe.

If the battle is going to be fierce to be placed at the end of the race, the two leaders should peacefully savour their last moments before crossing the line. During this time, some others have had their dreams of crossing the Altalantic erased.

For the series and prototype boats, this first stage of the Mini Transat îles de Guadeloupe will have brought back some vivid memories. In the  cast of this first week of sailing in each category, there has been a clear leader dominating the race, a person chasing, who has managed to leave the main following group, and a pack of people following hot on their heels. In both classes, Lanzarote will just have had enough time to celebrate the arrival of the first two in each category, before the others arrive, one after the other, like a string of pearls.

The solidarity of Minis in action

The battle within the pack has shown to great advantage some of the peculiarities of the Mini class, including the solidarity amongst the sailors. When they find themselves racing neck and neck, they prefer to prioritise navigation and not push the pack of boats into a raging battle, or break through their neighbours defences to drive their advantage home.

In groups, they came to agreements to take it in turns to navigate  and to rest, where everyone would reduce their speeds to  avoid jostling each other. Some new hierarchies were drawn out, alliances were formed out of  circumstance and they continued throughout this  windy run down the coast of Portugal. One jibe was enough for a competitor to lose sight of the rest of the chasing group and it would take some hours to catch up again.

Sometimes this feeling of solidarity went even further.  Ian Lipinski (Entreprises Innovantes) confessed in a radio conversation with PSP Flamant,that  a period of low morale following a bad decision on navigation at the beginning of the course, had been replaced by a feeling of optimism thanks to the encouragements of one of his most bitter rivals, Tanguy Le Turquais (Terréal). This solidatiry also mobilised the friends of Pilar Pasanau (Peter Punk) to help her get started again, or Fidel Turienzo (Satanas) when he was trying to repair his mast.

A problem doesn’t always mean that a pit-stop is necessary: just two hours ago, Jean-Baptiste Daramy (Chocolat Paries), hit a floating object while he was going at 12 knots during the night. With his back panel torn off, and with only one rudder, he decided, despite everything, to stay in the race and aim to reach Lanzarote before trying to repair the boat.  Sailing with only one rudder, he  needs to head out on a port tack and sail opposing heel, like he would have done in his earlier years when sailing an Optimist. It’s  operating on a shoestring, which wears out his nerves, but it goes to show that this skipper never gives up.

For others, the dream is dashed. This is particularly true for Aymeric Blin (Le Marin des Alpes) who sees his dream die away whilst docked in Sada. The 72 hour time limit for repairs (before a competitor is automatically declared as abandoning racing) is not enough for him and he sadly faces reality. The 72-hour limit rule may seem drastic, but it's also the only way the race director can maintain the fleet close and provide assistance to all the boats. The longer the period, the bigger the risk of having a fleets spread out over the course.

Jonas Gerckens (Netwerk) has also found out, though his Facebook page, that he is abandoned, despite not having informed Race HQ, so technically still on the race.