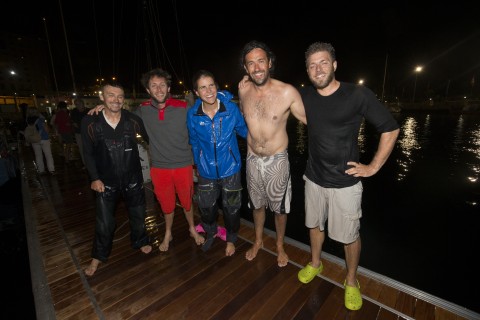 A dunking on arrival is part of the solo sailors' cameraderie. Photo © Christophe Breschi .

With the arrival of Julien Mizrachi (UNAPEI), 78 racers have now made it safely into the port of Las Palmas de Gran Canaria.

Of the 81 competitors at the start, just three solo sailors are no longer officially racing: Matteo Rusticali due to a dismasting, Luca Sabiu who triggered his distress beacon offshore of La Coruña and Frédéric Guérin, who following his dismasting was not able to effect repairs within the subsequent 72 hours allowed, but nevertheless intends to make for the Canaries.

Rarely has the first leg of the Mini-Transat seen so few retirements. There are two main reasons for this exceptional success rate: On the one hand, the standard of the competitors’ preparation is improving with every edition, but above all the weather conditions encountered en route proved to be particularly mild. With the exception of a slightly boisterous forty-eight hours as the fleet rounded Cape Finisterre, the solo sailors were more under pressure from light airs rather than big breeze.

Indeed, it is this factor that has made this leg one of the longest in the history of the event, even though in the seventies and eighties the boats’ performances were a far cry from those posted by today’s best prototypes and production boats.

On a sporting level, Ian Lipinski (Griffon.fr) came up against some stiff competition for the first time in two years. First off it was Erwan Le Mené (Rousseau Clôtures) who put the event favourite under pressure until he broke his bowsprit on exiting the TSS off Cape Finisterre.

At that point, an unexpected outsider stepped into the breach to continue the offensive, one Arthur Léopold-Léger (Antal XPO). Despite only a shortened preparation time and a particularly pressing professional commitment, Arthur was able to make the most of the weather conditions to chase down the head of the race, to the extent that he was even in contention of winning this first leg at one point.

However, like a certain team from New Zealand in the rugby, ultimately it was Ian Lipinski who secured victory… by 113 seconds. In the words of Victor Hugo “the bullet passed so near that his hat fell off…”

Just three hours separate all these pretenders for the podium, which bodes well for an excellent battle in the second leg.

With seven different leaders and 13 changes at the top of the leader board, the numbers are testament to the fierce battle that raged at the head of the fleet of production boats. The maximum separation between the leader and the closest pursuer dates back to 5 October, when Clarisse Crémer (TBS) boasted a 32-mile lead over the rest of the fleet. Two days later, she lamented a 35-mile deficit in relation to Rémi Aubrun (Alternative Sailing – Constructions du Belon), who finished second in the leg.

Ultimately, Valentin Gautier (Shaman – Banque du Léman) pocketed the win thanks to a very striking option in the last days of the race. Valentin Gautier has a very slight edge over the rest of the podium, which amounts to a little over two hours. Seven hours is all that separates the second and twenty-first placed skipper, David Alonso (Blue Oscar), a mere drop in the ocean when it comes to crossing the Atlantic. Particularly of note are some great performances from Ambrogio Beccaria (Alla Grande Ambecco) and Frédéric Moreau (Petit Auguste et Cie), who secured sixth and seventh place aboard their Pogo 2s. It just goes to show that an older generation production boat sailed well can still put up a good fight against the latest creations from Pogo 3 and Ofcet.

In the drink, work, sleep

Tradition normally dictates that each new arrival gets a dunking at the finish of the Mini-Transat pretty much as soon as he or she ties up to the pontoon. The 2017 promotion has placed the bar very high since the forced dunking has already been rehearsed in Las Palmas, which promises great things for the finish in Le Marin in mid-November.

As they await the start of the second leg on 1 November, the little community of Mini sailors is already organising itself. Some have returned to the bosom of their families whilst others have opted to remain on site, renting out a house in the less built up areas of Gran Canaria, often close to the surf spots and other boardsports….

Either you’re a Mini sailor or you’re not. Some have joined Marta Guemes, a native of the neighbouring island of Lanzarote, whilst those who had some little jobs to do have remained on site to get their boat shipshape again. Everyone will come back together from 25 October for the leg two safety checks.

On 28 October, it will be time for the prologue and the prize-giving for the leg from La Rochelle – Gran Canaria. At that point, there will be just three days to go before the skippers take the plunge. This time, there will be no escape. Once they’ve set off across the Atlantic, the solo sailors will have no more opportunities to make landfall before the West Indies. But this too is part of the thrill they are seeking from the legendary Mini-Transat.