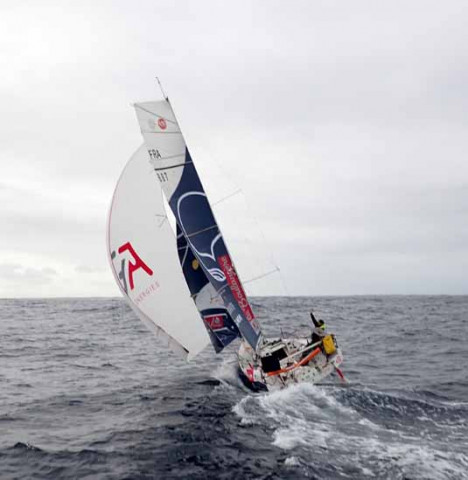 The skippers competing in the Mini-Transat La Boulangère are just about done with the demanding passage across the Bay of Biscay. They’re now entering the second major phase of this course, which is just as exhilarating since the coming days will involve downwind conditions.

Virtually all the competitors are opting to pass inside the Cape Finisterre TSS, aside from four sailors who are going for broke to the Far West, a move they hope will pay off.

Two sailors have currently been forced off the racetrack, hopefully temporarily, but for a minimum of 12 hours according to the rules. These are Briton Joe Lacey still on a pit stop in Gijon and Jonathan Chodkiewiez in La Coruña.

In the prototype category, François Jambou has taken the lead, with Axel Tréhin hot on his heels, whilst Ambrogio Beccaria is the boss of the production boats.

With the prospect of some long days spent slipping along under spinnaker on the horizon, this is what the Mini sailors were after when they signed up for the Mini-Transat La Boulangère. However, they’ve had to earn this golden ticket and the sailing remains complicated off Cape Finisterre and along the coast of Portugal, requiring the utmost vigilance with the heavy shipping.

Over the next few days, the sailors should be able to power along in a N’ly wind, which is gradually set to fill in, and a good swell (over 3 metres). They’re going to need to be quick, whilst maintaining control of the boat and trying to avoid broaching.

German skipper Morten Bogacki (934), Franco-Italian Fabio Muzzolini (716) and French sailors Julien Letissier (869) and Guillaume L’Hostis (868) were the only racers opting to pass to the West of the TSS (Traffic Separation Scheme) at 16:00 UTC. Split between two prototypes and two production boats, they’ll be after a more sustained breeze, slightly less shipping and a longer swell.

Game on among the prototypes and production boats

Leading the gang of four, Morten Bogacki is enjoying a fantastic debut in this Mini-Transat La Boulangère with a boat that compatriot Jörg Riechers secured 2nd place on in the 2017 race. He’ll be hoping that this bold move will enable him to close on the top French trio among the prototypes.

François Jambou (865) currently has control of the fleet, with Axel Tréhin (945) and Tanguy Bouroullec (969) ready to pounce. Marie Gendron (930) remains in the Top 5 and is doubtless hoping to stave off the attacks of Raphaël Lutard (900) and Erwan Le Méné (800) – among others.

Among the production boats, Italian Ambrogio Beccaria (943) continues to set the pace. Always quick, he’s renowned for keeping any strategic errors to the bear minimum. In his wake, a very compact French group fully intends to knock him off his perch. Félix de Navacelle (916) is still 2nd this evening, but Julien Letissier and Guillaume L’Hostis are making the most of their W’ly option to come back strong: they were 3rd and 4th at the 16:00 UTC position report, making nearly a knot more boat speed than the leader.

Two competitors in the pits

Late morning today (UTC), the support boat Yemanja sent the following message to Race Management: “The 958 is passing behind us at position 43°53'N 8°41'W at 10:39 UTC. He’s heading for La Coruña to try to repair the problems with his batteries and torn genoa.” Skippered by Frenchman Jonathan Chodkiewiez, one of the 22 competitors in the prototype category, he was approaching his destination at 16:00 UTC.

Meantime, Joe Lacey, safely made landfall in Gijón today at 0930 UTC, where he’s repairing damaged electrics and very much hopes to get back out on the racetrack. However, with a minimum stopover time of 12hrs, he won’t be able to join the fray again until 21:30 UTC.

The support boats also have a few other issues to report. Guillaume Quilfen (977) had to scale his mast to recover his spinnaker halyard, while Benoît Formet (887) had also lost the halyard of his large spinnaker at the top of his mast. It remains to be seen whether he too has successfully completed the perilous climb to retrieve it.

Accessing the Mini-Transat from… Germany

German doctor Morten Bogacki (prototype – Otg Lilienthal 934) is enjoying a cracking race in this Mini-Transat La Boulangère. Before the start, he explained what he loves about the Mini circuit and his journey to the start line:

“I love the fact that the Mini Transat is a real family. There’s a big group of us and you’re never alone on shore. You may be alone on the boat but the closest person to you is normally another competitor, which creates a real sense of camaraderie.

“Onshore, you’re always helping one other and lending tools, parts, material and advice and if they can’t help then they can usually point you in the direction of someone that can. There are also lots of opportunities to get together, which further strengthens the bond between us.

“This kind of network is really just starting in Germany. There are a few Minis now in the Baltic Sea with about 10-15 boats now racing regularly, with its own WhatsApp group and good communication between us. It’s certainly growing out there but it sometimes involves completely different people than there are here in France. In France there are some adventurous types that have already been across the Atlantic.

“On the singlehanded scene in Germany, there are some that race competitively, and this is a small but close group, and then there are a lot that participate in events like the annual Silverrudder (a 134-mile singlehanded race around the island of Funen in Denmark) with about 350-400 singlehanded boats of varying sizes including the Mini.

“Sadly there are no Mini training clusters like there are in France. There are a few boats around Kiel, about 5-7, which sometimes meet to go to another port over the weekend but it’s not training as such and they’re not that competitive. I think that when you want to race a Mini then you have to go to France, Lorient in particular, and train.

“Mine is a special project because just this season Offshore Team Germany asked me if I wanted to do the Mini Transat. Jörg was still racing the boat so it was a really short project span and I mainly just did this year’s Mini races and the qualification course, with little time for training in between other than the odd day, so what with my delivery trips and all that stuff, I didn’t really join a training centre as part of a training block like the others. I’m ready to go though. I do feel a bit nervous but I think you need that in competitive sailing!”