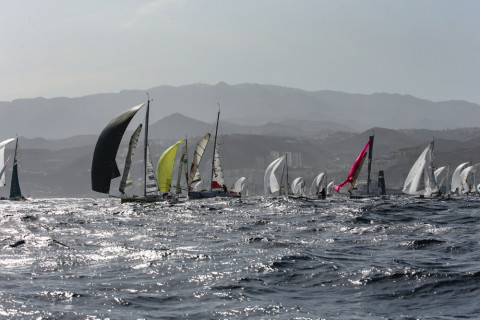 Mini Transat fleet are away on the second leg

This Saturday at 14:33 UTC, 82 sailors took the start in Las Palmas de Gran Canaria of the second leg of the Mini-Transat La Boulangère in what proved to be a bracing introduction.

The racers very quickly had to get their bearings in a fine trade wind, which is set to propel them along the route to Le Marin, in Martinique. A few hours after kick-off, two female sailors announced their return to land, to try to effect repairs: Amélie Grassi (Production) and Marie Gendron (Prototype).

There was a clash of emotions this lunchtime on the pontoons of Las Palmas de Gran Canaria, when the 82 sailors competing in the second leg of the Mini-Transat La Boulangère took turns to cast off. A combination of excitement, impatience, happiness, apprehension and a sensation of vertigo prior to the leap into the unknown and a fierce desire to get out on the racetrack resulted in both laughter and tears and sometimes a mixture of both.

Once at sea, the racers soon get into the zone and at 14:33 UTC they set sail off Las Palmas de Gran Canaria. With all these sailors hoisting their spinnakers, it was a veritable feast for the eyes. Some attacked hard to be first across the start line, whilst others opted to set off in a second and even a third wave of competitors.

The race is long though (2,700 miles) and in the Mini-Transat, there are as many objectives as skippers. In a fine trade wind and fairly heavy seas, the start was intense and some sailors were perhaps caught off guard after their stopover in the Canaries. Indeed there were a number of broaches and the first few minutes set the tone for this second leg, which is forecast to be quick.

Two sailors suffered some minor technical issues just before they took the start. Raphaël Lutard noticed that his antenna attachment had come loose.

The skipper of prototype number 900 returned to port to scale his mast and resolve the problem and then immediately headed back out onto the racetrack, crossing the start line just quarter of an hour after the rest of the fleet. Nothing crippling then.

For his part, David Kremer suffered some problems with his autopilot. He too had to return to port and finally crossed the start line 1hr30 after the rest of the fleet.

They’ll be returning to the marina in Las Palmas de Gran Canaria where they’re expected to make landfall this evening, at which point we’ll find out more about their intentions. With regards the Russian sailor Fedor Druzhinin, he’s encountered some problems with his mast wand, which he’s trying to resolve within the protection of the coast.