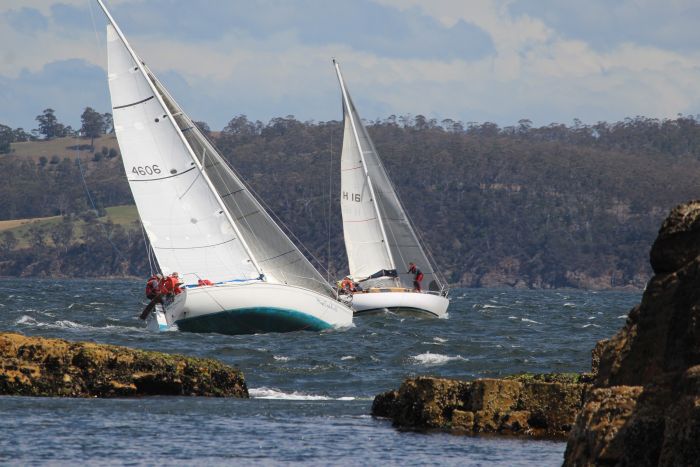 Ed Psaltis (Midnight Rambler) was a class act on the water in Saturday’s Combined Clubs Summer Pennant winning Division One IRC, AMS and taking second in PHS on corrected time. The 1998 Sydney to Hobart winner and 2019 entrant kept the Sydney 36 steady in the gusty conditions and never looked out of control, with the boat kept under the rig the entire race.

The fleet started the day in soft north-westerly conditions from Castray but the forecast 25-knot cold front hit just before the Iron Pot and did not let up, with 30+ knot bullets shooting down the River Derwent as the fleet battled home.

The Division One fleet sailed a new course down to Clifton Beach, while all other divisions went around Betsey Island. The fleet battled a wind tunnel through the gap between Hope Beach and Betsey Island, but Derwent Sailing Squadron Sailing Manager Peter Watson noted the excellent seamanship in the difficult conditions. “We had three retirements overall, not due to gear damage but with skippers being prudent in the conditions, but the seamanship on display in the tricky conditions was great,” said Watson.

AMS Results: Midnight Rambler took out Division One from Intrigue and B&G Advantage (Jeff Cordell). Division Two was won by Southern Swordfish from 42 South (Mark Ballard) and Wings Three Division Three was won by Young Lion (Steve Chau) from another Young 88, Young One and Footloose.

The fleet takes a break from the Combined Club Summer Pennant Series next week with several teams participating in the Tasmanian Yachting Championship which will be sailed in Hobart from the Derwent Sailing Squadron on 30 November and 1 December 2019.