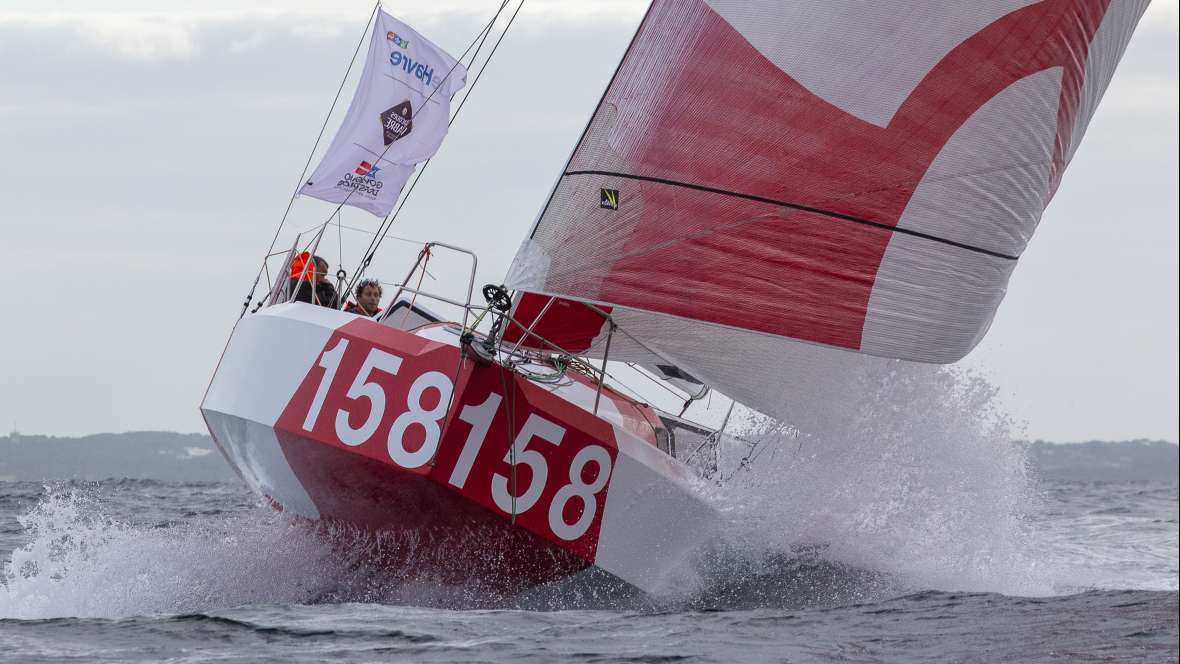 Salvador de Bahia is preparing to welcome the next IMOCA and the only couple on a boat in this race, Britain’s Miranda Merron and her French partner on land and sea, Halvard Mabire on Campagne de France at the end of the evening (local time, 23:00 UTC). Behind them the leaders of the Class40s will soon begin filing past the black and whilte Barra lighthouse toignite the pontoons of the Terminal Nautico again.

“We’re going as fast as we can! It's time to finish anyway, as we are about to run out of milk, cheese and chocolate,” Merron wrote in her overnight message.

Far from sitting on their lead the latest generation Class40, Crédit Mutuel, is extending over Britain’s Sam Goodchild and Leyton, and barring accident or mechanical failure will win the Transat Jacque Vabre Normandie Le Havre

The French duo of Ian Lipinski and Adrien Hardy have been winning – in demeanour and on the leaderboard – and their distinctive scow, the expression of a new architectural vision by David Raison, will most likely herald a significant evolution of the class. Behind Crédit Mutuel, the podium looks set, with the narrowest of runners-up in 2017, Aïna Enfance & Avenir, expected tomorrow (Wednesday). But behind them close battles are raging on the Atlantic, with some approaching Recife, the others still in the Doldrums, which is preparing to deliver its last prisoners tomorrow.  Maybe.

“Arriving on the coast like this by boat at the end of a trip, it's amazing, there is the competition and there is the journey, every race is different from this point of view,” said an excited Hardy today.  Lipinsk, the author this project, who has been working non-stop for a year on it, also seems to be enjoying the sweetness of the last few miles without the pressure of any pursuer: “We worked night and day and 7 days a week, using all of our physical and mental reserves,” Lipinski wrote in an overnight message thanking all how have helped him.“We launched on August 13 and we haven’t got the toolbox out for the whole crossing. After coming out of the Channel, we never touched the helm again and as we hoped, the boat becomes magical in more than 25 knots of wind. She flies on the water and rides the waves without slowing down.”

By choosing David Raison to design the new boat, Lipinski knew where he was going; a funny-looking scow with a spatulated bow but with tremendous power in all conditions, Crédit Mutuelhas come out of the same mould as the 6.50m boat with which Lipinski won the Mini-Transat two years ago. It has broken the mould and stranglehold of the Manuard-design boats. Smashing the class speed record in the north-east tradewinds before the Doldrums was just part of the jigsaw. The talented due have maintained their comfortable lead since exiting the Doldrums and should cross the line for victory in the small hours of the morning around 05:00 UTC

Behind the podium,Linkt and Made in Midi are battling hard for fifth place, ditto between Cre’actuel Cotes d’Armor, Edenred and Vogue avec un Crohn over eighth.

Campagne de France is due in at around 19:00 local time slightly ahead of Crédit Mutuel, and who better than Halvard Mabire, president of the Class40, to appreciate the performance of Ian Lipinski and Adrien Hardy? “The boat design is progressing and the new 40 feet are sailing as fast as the old IMOCA,” he said. “At reaching angles, they have the ability to plane on waves that we don’t have. Crédit Mutuelis the lastest generation. Her downwind performances are incredible, but we musn’t draw too hasty conclusions,” commented the doyen of the race.

Behind them things could barely be tighter between Pip Hare Ocean Racingand 4myplanet,who after 4,500 miles of sailing are separated by just 2.6 miles on the leaderboard, and 17 miles laterally, with just under 300 miles to go. They have been literally side-by-side down the north-east coast of Brazil and appear to be converging again. “It’s jolly tense out here,” Britain’s Pip Hare said on Wednesday morning. “Three days ago, we were alongside them within 200m of each other for about three hours. We were exchanging emails and I know that they’re watching us as much as we’re watching them. It’s really nice to have that kind of intensity in the race.

“At this wind angle and strength is our absolute Achilles heel because we’ve only got a tiny gennaker for reaching We are squeezing every tiny bit of speed out of this poor boat. We’re having an epic race with Alexia and Joan.”