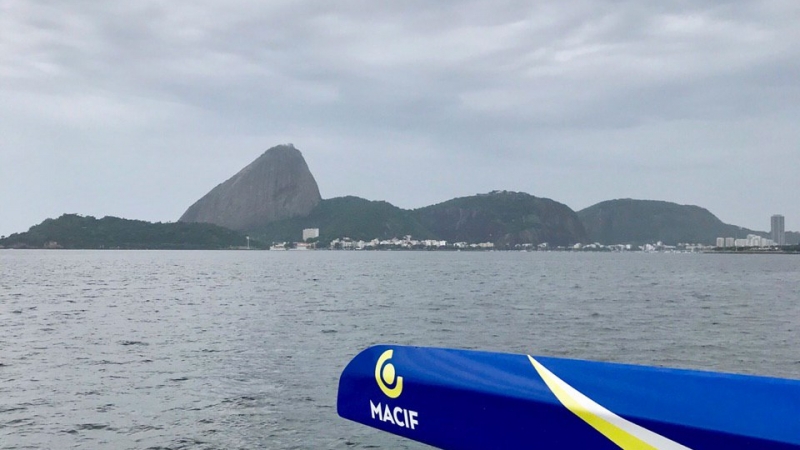 What a day of twists and turns for Brest Atlantiques! Maxi Edmond de Rothschild was the first to pass through the Cagarras Islands today at 12:16, followed by Actual Leader in second. Sodebo Ultim 3's crew, which at one point had taken the lead, were thinking long-term and decided to alter their course in order to better preserve their boat. MACIF, docked in Rio since Wednesday evening for a pitstop, set sail once again at 16:10.

Maxi Edmond de Rothschild was the third trimaran to sail round the “virtual” race marker at Rio – between the Cagarras archipelago and Ipanema beach – today at 12:16. MACIF passed the mark on Wednesday at 18:04, and Sodebo Ultim 3 at 22:23. Franck Cammas and Charles Caudrelier were then 13 hours and 53 minutes behind Sodebo Ultim 3, which had taken the lead during the night.

But, as Maxi Edmond de Rothschild was heading southeast, Sodebo Ultim 3, 200 miles ahead at the time, suddenly changed course.

“Looking at the weather conditions in the area, Thomas Coville and Jean-Luc Nélias decided not to enter the Atlantic crossing. They’re now looking at the best route to Cape Town, one that is a compromise between safety and performance,” their team explained.

Race director Jacques Caraës added: “They felt that the conditions were too rough to continue in a southeasterly direction. Thomas chose to alter their course in order to protect the boat; they will now lie low before setting off again.”

So what exactly were the conditions like? “The route that was becoming obvious would mean encountering a depression that was heading southeast. The boat would have had to maintain high average speeds in these conditions, to avoid getting caught upwind between the depression and the sea ice drift areas. They probably decided not to take the risk in order to protect the boat,” explains Christian Dumard, weather consultant for Brest Atlantiques.

And so, the race is underway once again. Maxi Edmond de Rothschild and Sodebo Ultim 3 are now racing on the same course, while Actual Leader, which passed through the Cagarras Islands on Wednesday afternoon, should encounter MACIF, which is about to resume the race, following a pitstop of 21 hours and 26 minutes in the Marina de Gloria.