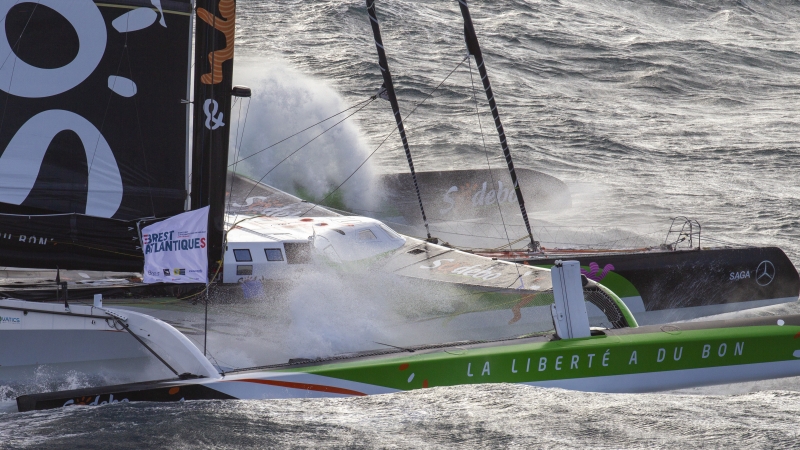 Ten days into racing in the Brest Atlantiques is like a re-start from Rio, with MACIF doing a pit-top, Sodebo Ultim 3 rerouting to avoid bad weather and all keeping the breaks to avoid exposing their boats from being pummelled by rough seas, but conditions should become more manageable within two days.

The fleet is currently led by the maxi Edmond de Rothschild. In the second weekly Brest Atlantiques video conference call with the boats, held today in Paris at Maison de la Bretagne at the foot of the Montparnasse Tower, all skippers in the Ultim 32/23 Class spoke candidly of the tough conditions they are experiencing since Thursday afternoon.

While François Gabart, buckled into his seat on the trimaran MACIF, had a smile and a cheerful voice, he described truly knocking conditions and rough seas.

Meanwhile, Franck Cammas (Maxi Edmond de Rothschild), Thomas Coville (Sodebo Ultim 3) and Yves Le Blevec (Actual Leader) had the most drawn features, the latter two even stopping for a few anxious seconds during the conversation to wait for their boats to land off particularly high waves.

“These are the worst conditions since the start and not far from the worst I have ever encountered on a multihull,” said Yves Le Blevec, one of the most experienced offshore multihull sailors around.

“With each wave, it feels like the boat is going to smash; this is not fun. We have about 30 knots of wind, but what's hard is that we have the waves face-on and the sea is completely crossed. We are being thrown about which means we have to hold on at all times.”

The same is true for Franck Cammas: “We currently have 25-28 knots of wind and a headwind sea; it's not very comfortable. It moves a lot, we have difficulty standing up.”

The fact remains that the sailor from Aix-en-Provence is pleased that, after the forced stop in Salvador de Bahia in the middle of the week to repair the rudder, the maxi Edmond de Rothschild is back leading in the race.

“We didn't expect to take the lead now, it's also linked to the circumstances of our competitors, but it's rather nice, it's a new start for the race.”

A new start, due to the technical stopover of trimaran MACIF in Rio for the replacement of the central hull rudder), while Coville took up a new course on Sodebo Ultim 3 on Thursday.

“When we arrived in Rio, we had no choice but to set off on this southern route, which was trying to pass under the big depression that we are currently bypassing,” Coville explained.

“After a short nap, Jean-Luc (Nélias) told me, ‘Thomas, we're not going as fast as expected, the depression is catching up with us and we're going to find ourselves stuck upwind in 45-50 knots’, so it was with a heavy heart that we decided to turn around.

“For morale, it wasn't very good, because we had moved ahead, so it meant losing a few hundred miles we had built. I was really disappointed, because if we had managed to get through this depression, we would have found ourselves with a very comfortable lead, being one weather system ahead of the others. It's hard to accept losing so much ground.”

However, the road to Cape Town is still long and the forecasts promise a possible general bunching up of the fleet on the other side of the Atlantic in Cape Town, as François Gabart, second at 4pm at 47 miles behind the Franck Cammas/Charles Caudrelier duo explained.

“We find ourselves crossing in not easy conditions, against the sea and upwind for almost two thirds of the course to Gough Island. There should be little wind in the area of the high, so we will not go very fast,” Cammas said.

“It's a pity, because I imagined this Rio to Cape Town to be full-on flat-out speeds on flat seas; I've been dreaming about it for the last few months. Unfortunately, it won't be like that this time. We will have to come back.”