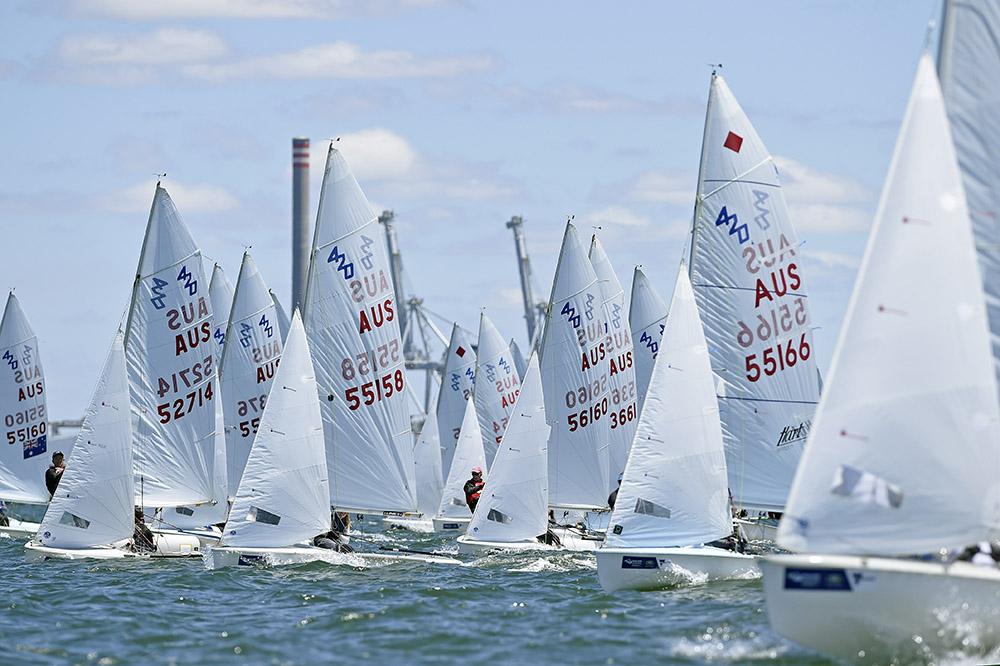 Melbourne turned on its best day at the Sailing World Cup Final, loads of summer sunshine and cool S-SW winds 10-15 knots for the close of the Olympic and Invited classes competition that drew sailors from around the world aged eight to 79.

On the eve of the Youth Sailing World Championship beginning in New Zealand next week, Laser Radial’s Finn Alexander (NSW) put the final touches on his perfect preparation. There was no doubt about the Australian Sailing Youth Team member‘s victory, he finished 14 points ahead of Zac Littlewood and 16 points ahead Caelin Winchcombe who was third overall.

“While the result was really good, it was more about making the final touches on my preparations for the Youth Worlds,” Alexander said. “It was about the learning and finalising any holes in the system that’ll best prepare me for New Zealand. It’s the perfect preparation – you can treat it like the worlds with the added pressure and even the coloured leader’s bibs.”

After the worlds, 17 year-old Alexander leaves the youth class to begin his Laser full rig campaign in Adelaide next month.

Tom Crockett and crew Max Paul (NSW) held onto the 29er yellow leader’s jersey from Saturday, adding another set of good results to keep John Cooley and Simon Hoffman out of contention and in the silver position.

“I like regattas when they have both light and windy days, because it really challenges all the sailors. It’s not just who’s the biggest or the lightest,” said Jack. “My ultimate goal is to get to the Olympics one day – I don’t mind what boat. And I guess just always meeting the small goals that I set, because if I meet them I can get to where I want in the future.”

Jack’s hero in the sport is Rio 2016 gold medallist Tom Burton, who happened to be unrigging in the park after his own Laser Medal Race. The talented brothers were introduced to their hero, putting the finishing touch on an already big day for the awestruck Sydney pair.

“We got together 15 months ago as a crew, it hasn’t been a very long campaign but we’re feeling pretty confident going into the nationals and youth nationals in Adelaide,” said Joel. “We’re just trying to stay very consistent and level-headed up until then.

“This is my fifth Sailing World Cup in Melbourne. It’s really good here at St Kilda, I think there’s a great atmosphere and it’s amazing to get involved with the top sailors in the world.”

Nick Sharman and James Grogan finished behind the dominant Victorians with a seven point deficit and third went to Alex Higgins and Joal MacKenzie.

James McLennan (VIC) proved his dad’s investment in his sailing a worthy one when he comfortably beat the Sabre fleet, including his father. “It’s not fair!” Gary McLennan said smiling when his 20 year-old son won the series with a race to spare, James’ final four results all bullets.

The Viper multihull series went to Tayla Rietman and Lachie White (VIC/NSW) from Jack Challands and Harrison Rietman (VIC), Tayla’s twin brother. Their two-day performance on Port Phillip is the ideal groundwork for Rietman/White’s world championship quest against the class’ top European and Australian teams next month across the bay.

Minnow top honours went to Edward Warner (VIC) and first place in the Open BIC class went to Connall Green (VIC), whose worst score was a third over six races.

In the Optimist Open fleet the closest finisher to Ryan Littlechild was Daniel Links in second and in the Optimist Intermediate fleet Oscar Green (NSW) cleared out on the field by a whopping 12 points when the last of the points were tallied.