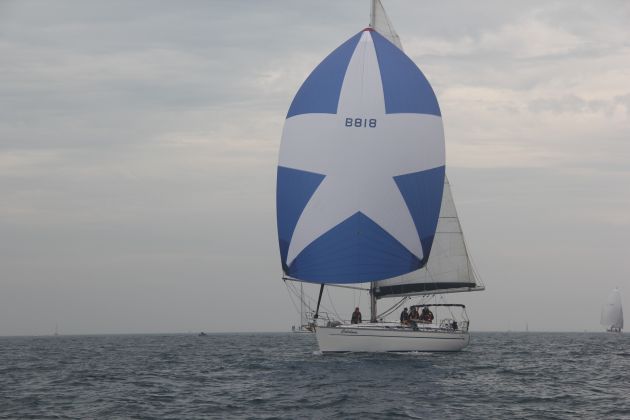 28/12/2016
Team ORCV has been very busy putting the Cock of the Bay to bed and preparing for today's Wyndham Harbour Melbourne to Hobart and Devonport races.
We had a lack of wind for the start, just off Portsea Pier but it was far from dull!
A couple of yachts got a little bit close for comfort and gave their neighbours a wee nudge. Luckily no damage was done but lots of shouting ensued and the overly-enthusiastic offenders had their wrists slapped (by getting sent to the back of the line). You can't stop a good boat though and we get the feeling they will be big contenders for a win.
Watch the video of the yachts playing bumper cars here:
https://www.facebook.com/OceanRacingClub/
The fleet was cheered on by a flotilla of about 50 small boats, an enthusiastic crowd of well-wishers and some confused- looking tourists on the pier. The atmosphere was electric and we are delighted to report  that everyone got through the heads without incident.
What's happening out there?
The Devonport fleet have had a slow start this afternoon and the unpredictable winds will have them working for their dinner tonight.  Peccadillo (Charles Meredith) has taken a massive leap ahead of the rest of the fleet and will be one to watch for line honours. White Noise (Daniel Edwards) and Soiree Blue (Douglas Lithglow) are vying for second and it's not an easy bet to pick the winner here. In the time it has taken to write this release, Summer Wind (Paul Woodman) dropped from pole position to sixth in a close battle with identical yacht Caledonia ( Malcolm Mitchell and Peter  Jenkins). This will be a race within a race with many rums being bet on either yacht.
Track them in real time. Hover over the yacht name to get the crew bios:
https://race.bluewatertracks.com/melbourne-to-devonport-2016
The Hobart fleet are being led by Lord Jiminy (Chris Barlow) who have taken a whopping  lead in front of the pack, stealing pole from Cadibarra8 ( Paul Roberts) who had dominance all day, everything changes after dark!
One for the Road (Gary Prestedge) is close on their tail , almost neck to neck with both Arcadia (Peter Davison) and Double Trouble (Jordan Junkel-Lozel) as the fleet approaches King Island.
So, Lord Jiminy, one of the most photogenic yachts we have ever seen (enjoying a prep run for the Osaka double-handed race in 2018) is currently sitting in line honours and the fleet have a lot of work to do if they want to steal the silverware from this crew. It is hard to imagine anyone being able to close that gap now.
As predicted the winds are now starting to pick up but they are still expected to come and go all night. Both fleets are going to have a busy overnight with lots of sail changes likely. It's still in the hands of the wind gods – anyone could win especially if things get interesting after King Island.
Track them in real time! Hover over the yacht name to get the crew bios:
https://race.bluewatertracks.com/melbourne-hobart-race-2016
– ORCV Media