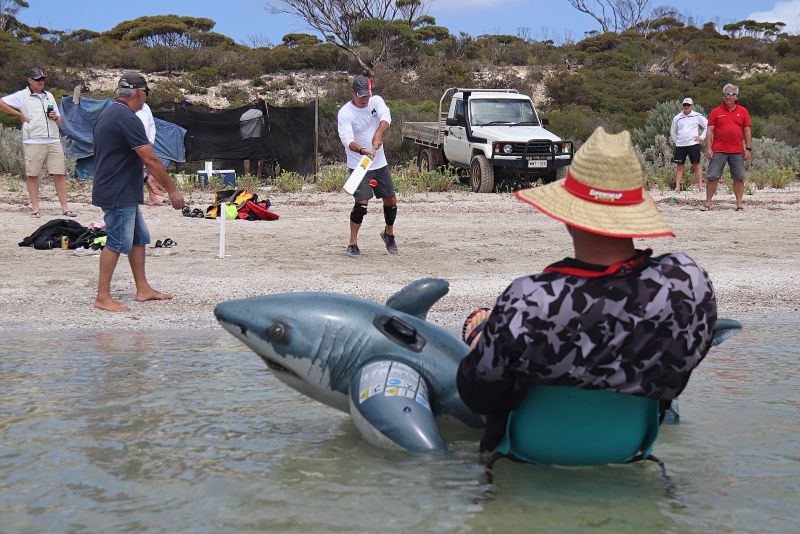 It's all about having fun at Megga's BBQ. Photo Traci Ayris.

Matt Allen's Ichi Ban continued its winning ways with another division one IRC win today, solidifying their position on the top of the tables going into the final day of racing.

Geoff Boettcher's Secret Men's Business finds itself still in second place, not too far off the pace of Ichi Ban but just lacking a little bit of straight line speed to take points off the reigning Sydney-Hobart champions.

Today's race was the traditional Megga's BBQ passage race, which is a short 10-12 mile race around Boston Bay that finishes in the iconic Lincoln National Park at Spalding Cove around lunch time.

The race is run as a commemoration of the late 'Megga' Bascombe, a local mariner and Port Lincoln Yacht Club legend who passed away some years ago.

Secret Men's Business sailor and Port Lincoln ex-pat Nick Bice said Megga was a well-respected member of the yachting community and was a great role model to many of the juniors growing up in Port Lincoln – and that the Wednesday race of Lincoln Week Regatta and the barbecue at the end of it was a great way to commemorate the man.

Today's division one racing also saw Ichi Ban take the AMS and PHS wins after a dominant performance throughout the day.

In division two on IRC it was Darryl Hodgkinson's Victoire that found its way back into the winners circle and the top of the table, after finishing ahead of Rob Date's Scarlet Runner 11 in second and Matthew Grayson's Flying Cloud in third.

On AMS it was Scarlet Runner that took the win, ahead of Flying Cloud in second and Caillin Howard and David Oliver's Aikin Hames Sharley in third, while on PHS it was Victoire in first, Bob Schahinger's Clockwork in second and Bruce Taylor's Chutzpah in third.

Division three saw Simon Turvey's Born to Mentor finish with the AMS race win, ahead of Murray Mackay's Doesn't Matter in second (maintaining the regatta lead) and Adrian Wotton's School's Out in third.

On PHS it was Andy Shipp's Kinetic Energy that took the race win ahead of Bill Van Riet's Mighty Fine Lyons in second and Dale Price and Ron Parker's Taniwha in third.

The division four battle is also starting to take shape with Hayden McFarlane's Misty taking the race win on PHS today and maintaining the regatta lead, ahead of Phil Kelly's Steeple Jack in second and Wayne Knill's Etchell, Medium Rare, in third.

Tomorrow will see two races around the cans in Boston Bay to round out the event, which will take the total races for the regatta up to six with one drop. It will be an interesting day with the overall winners decided in some close action.