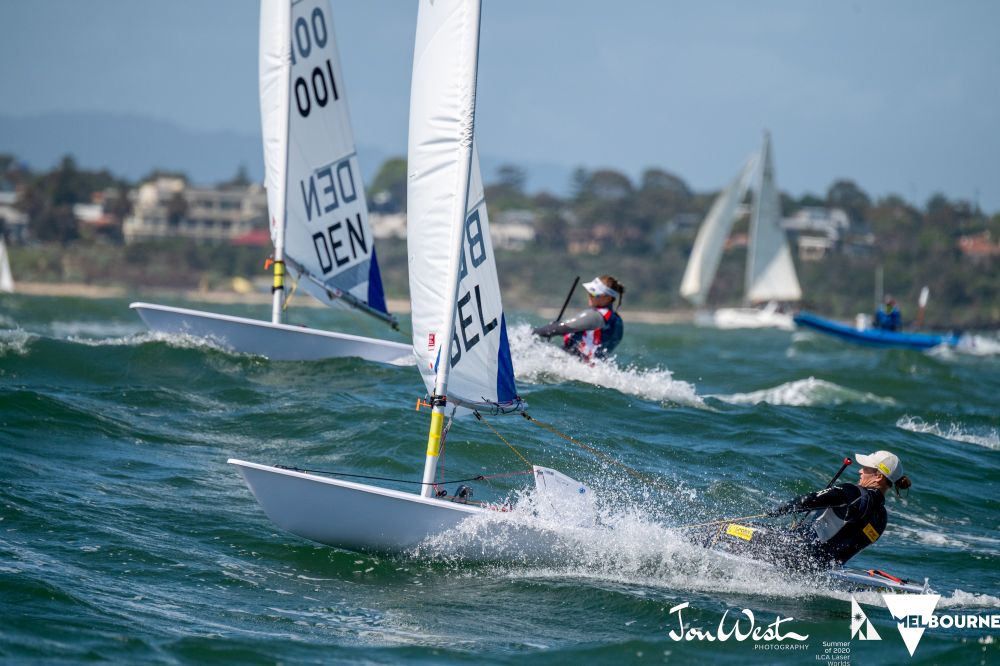 Tight at the top. Emma Plasschaert (BEL) and Anne-Marie Rindom (DEN) do battle on the fourth day of the Laser Radial World Championships at Sandringham. Photo Jon West Photography.

With all six qualifying races completed, the three pre-event favourites have established a clear lead at the 2020 ILCA Laser Radial World Championships being sailed at Sandringham in Melbourne.

In second place is 2018 world champion, Emma Plasschaert from Belgium. She trails Bouwmeester by 10 points.

In third is Anne-Marie Rindom from Denmark, also a three-time world champion and the bronze medallist from Rio. She trails Plasschaert by a single point.

Three races were sailed today, after Melbourne’s fickle weather made life difficult on the first three days. Sunday and Monday were super light, while yesterday’s sailing was interrupted by a thunderstorm, complete with lightning.

There were no such problems for the race committee today, with strong southerlies of above 20 knots blowing consistently from the south all afternoon. There were big waves, which made things hard for the less experienced sailors, and even the most hardened campaigners were feeling the effects by the end of the third race.

“This regatta is brutal,” was the comment from Marit Bouwmeester on hearing that tomorrow’s racing will start at 11am. “It’s nice to be into the finals, though, with all the top ones in the same fleet.”

When asked what her recovery strategy would be, she replied simply: “Food!”

Anne-Marie Rindom also commented on the effects of three races in cold and testing conditions. “I just ran out of energy,” she said, explaining her higher scores in races 5 and 6. “You definitely have to work for it in these conditions.”

While a small gap has now opened between the three leaders and the rest of the field, there is still just 14 points between third and tenth. After four races had been sailed, everyone was able to drop their worst performance, and this brought some of the fleet back into contention.

One such sailor was Alison Young of Great Britain, who began the regatta with a 21st, which she was able to discard. Her subsequent scores have been 6,4,4,2,5 which moves her into fourth place.

Rio silver medallist, Annalise Murphy of Ireland, also moved up after a poor start to the regatta. She was able to discard her opening day score of 38, which she followed with 9,1,9,7,2 to be fifth overall.

Josefin Olsen (SWE) started with a 36th but today’s scores of 3,1,3 moved her into seventh.

With Olympic selection at stake for many competitors, there are a number of fascinating boat-on-boat battles taking place further down the fleet.

One sailor who is knocking on the door of selection is 20-year-old Australian, Mara Stransky. The young Queenslander moved into the top 10 after race four, had a 14th in race five but recovered to score a fifth in the final race of the day. “I can’t believe I capsized three times today,” she said. “Twice in one race!”

Stransky will need a top 10 finish to win a place on the Australian Olympic team. She is currently fifteenth but only five points from tenth.

Tomorrow the top 53 sailors will go into Gold fleet, which will be the first time all the big names have raced each other at this regatta. Race Director Peter Merritt is hoping to again sail three races, and if successful, we will have a clearer picture of the likely podium, the top 10 and those who will be going to Tokyo.

The men were kept on shore to allow the women’s fleets to get their first two races sailed, but when they finally got underway there was no shortage of drama. There were nine black flag disqualifications in the first race and Australian Lawson McAullay managed to break his mast later in the afternoon. His explanation: “I got ran into.”

Russian Daniil Krutskikh consolidated his lead with another good day’s sailing, scoring a second place and a sixth (his discard) to be six points clear of Brazil’s Gustavo Nascimento, who moved two points ahead of Michael Compton (AUS).

Full results are available at http://sailingresults.net/?ID=80330