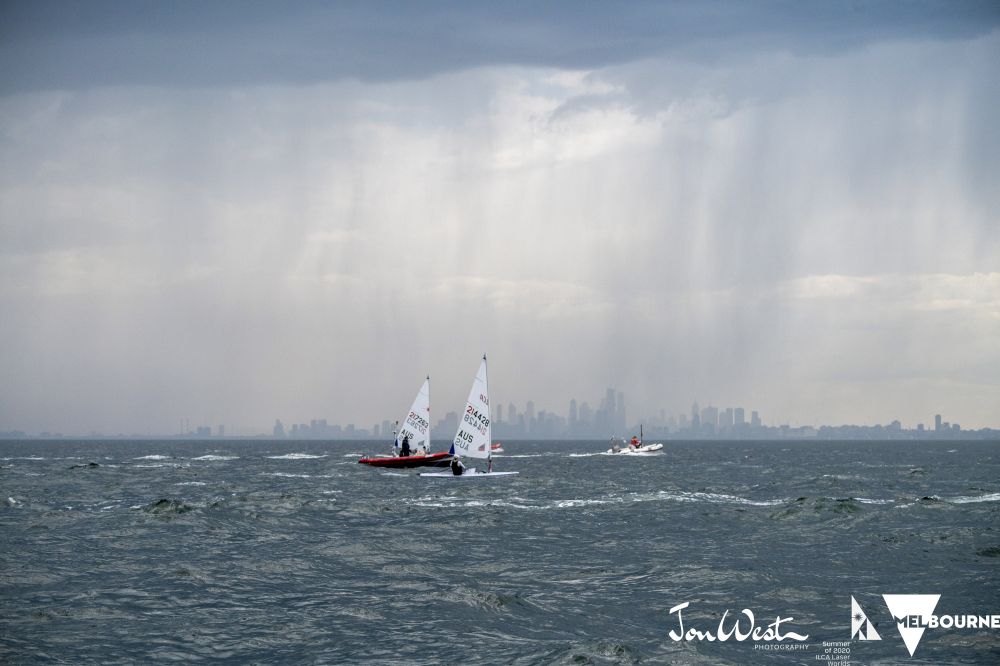 The weather played havoc again at the ILCA Laser Radial World Championships in Melbourne today. Two attempts were made to get Yellow Fleet started shortly after 2pm but a series of rolling thunderstorms, accompanied by lightning, forced the sailors to hurry back to the Sandringham Yacht Club before the course became dangerous.

There was a long wait onshore, but with the regatta already two races behind owing to light winds on the opening days, the AP flag came down at 5pm and the sailors rushed to their boats.

Now the problem was not lack of wind. A strong southerly had filled in behind the thunderstorms and was blowing a solid 22 knots.

Yellow Fleet was put into sequence at 5.55pm and got a clear start at 6pm, to accompanying cheers from the committee boat. Blue fleet followed five minutes later, again to a cry of “all clear”, and finally the men’s fleet was also under way.

The racing was wild and furious, with big waves building and the wind staying above 20 knots. As they came ashore, the sailors looked cold and very tired.

It was a day when experience was likely to come to the fore, and so it proved. The Yellow Fleet race was won by Rio Olympic silver medallist Annaliese Murphy (IRE) who was in an ebullient mood. “The waves were awesome, everyone was having so much fun downwind. Upwind, not so much,” she laughed.

Rio Olympic Champion Marit Bouwmeester won Blue fleet, ahead of defending World Champion Anne-Marie Rindom (DEN) who moves to the top of the leaderboard, one point ahead of Bouwmeester, as a result. She commented that the day was not so much physically tiring as mentally exhausting. “You had to turn yourself on-off all the time and keep yourself 100% ready to go all day,” she explained.

Overnight leader Maud Jayet (SUI) finished sixth today, to now hold third overall. “It was a pretty good day,” she said. “But I’m so glad I changed to my super suit (her thicker wetsuit).”

Qualifying will continue tomorrow, with at least one race needed to complete the qualifying series. The first discard comes into effect after four races, and that could shake up the leaderboard considerably.

The earliest sailors can be split into Gold and Silver fleets is Thursday, the penultimate day of the regatta. If possible, three races will be sailed on each remaining day.

While not an Olympic event, competition is still fierce in the men’s Radial, especially among those who hope to progress to the Standard fleet next year – and among the older fraternity, who are looking towards the Australian and World Laser Masters regattas, to be sailed across the bay in Geelong in late March.

Daniil Krutskikh of Russia placed second in the big waves today, to extend his lead to 15 points over Australian Michael Compton. Nik Pletikos of Slovenia is third. The race was won by Australian Zac Littlewood, who could move into the top three tomorrow if he is able to drop his 25th place from the opening day.

Full results can be found at http://sailingresults.net/?ID=80330