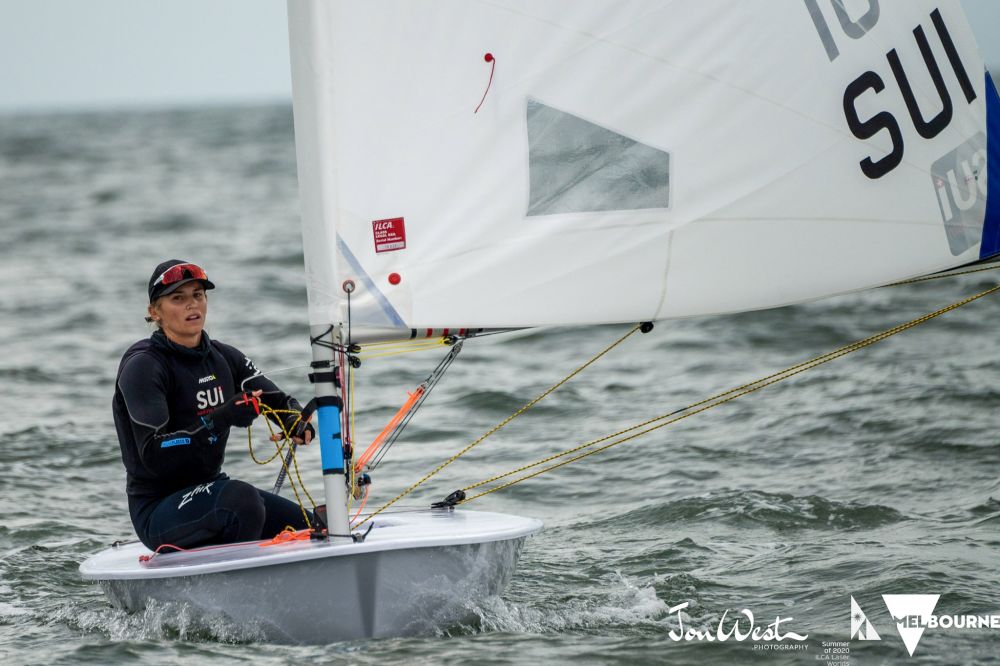 Light and variable winds again caused havoc at the 2020 ILCA Laser Radial World Championship being sailed out of Sandringham Yacht Club in Melbourne. For the second day in a row, only one race was possible as the wind drifted between south-west and south-east, rarely rising above 5 knots in strength.

Maud Jayet of Switzerland handled the conditions best, adding a win in Blue Fleet to yesterday’s second placing. She leads defending champion Anne-Marie Rindom (DEN), who had a third place today, by one point.

“It’s still early,” Maud Jayet said of her early lead. “It’s easy to get a bad race in these conditions so I’m happy with the results (so far).”

When asked the reason for her success she said it was “not going too crazy” for the qualifiers.

“I just haven’t been taking any risks, staying in the centre, playing the shifts. And I seem to have good speed, which helps,” she concluded.

The Yellow Fleet winner today was Tuula Tenkanen of Finland, but she sits in 37th overall after a forgettable opening race yesterday.

Current Olympic champion, Marit Bouwmeester (NED) has been most consistent, with two third places which leave her in third overall.

Another consistent performance has come from Greek champion Vasileaia Karachaliou who has recorded a second and a sixth, which she says is in stark contrast to her opening races at last year’s Worlds. “I had two yellow flags (penalty turns) and a Black Flag (disqualification) so I’m just trying to be consistent in the top 10 this year.”

The light conditions are making it tough for those sailors still trying to win a place on their national team for the Tokyo Olympics. Australia, New Zealand and the USA, for example, have all their sailors out of the top 10.

Fifteen-year-old Mina Ferguson is the surprise leader of the Australian contingent, sitting in 14th place after a seventh yesterday and a 16th today. She leads the two main contenders for an Australian nomination, Zoe Thomson, who is 15th and Mara Stransky who is 19th.

Mina said she always does well in the light and was able to play the shifts to her advantage today.

New Zealander Olivia Christie has qualified her country for the Games, but needs a top 10 position to be certain of selection. She is the leading Kiwi but sits in 31st overall.

The American sailors have a very clear selection criteria, but Erika Reneike is the best-placed of the four USA sailors, in 25th.

Russian Daniil Krutskikh leads the Men’s Radial World Championship, which is being held concurrently with the women’s event. He has won both races sailed so far and has opened up a three point lead over Australian Michael Compton. Slovenian Nik Pletikos, whose two sisters are competing in the women’s Worlds, is in third place.

Full results can be found at http://sailingresults.net/?ID=80330

The wind forecast for the next three days is for stronger and more consistent winds, which may allow the race committee to sail three more qualifying races tomorrow. A minimum of four qualifying races must be sailed before the competitors can be split into Gold and Silver fleets for up to seven finals races.

A video interview with yesterday’s race winner, Marie Barrou can be found at https://www.facebook.com/intlaserclass/videos/154884018836424/