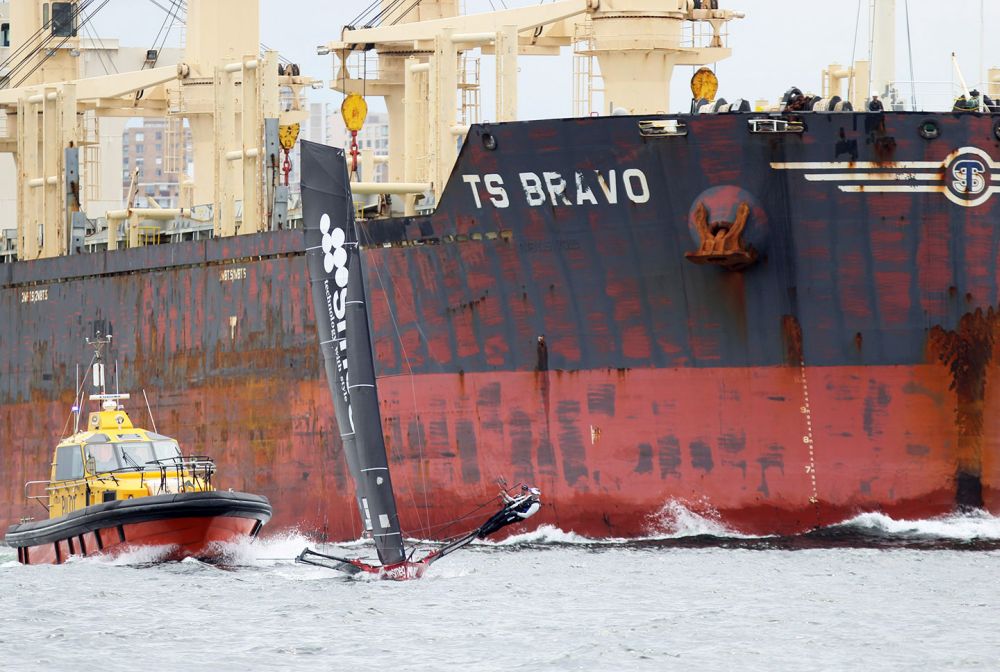 23/02/2020
The defending champion Shaw & Partners Financial Services team of James Dorron, Harry Bethwaite and Steve Thomas (replacing Tim Westwood on the day) led all the way against a strong fleet to score a clear victory in Race 8 of the Australian 18ft Skiff Championship on an incredibly busy Sydney Harbour today.
Shaw & Partners easily won the start and kept her chances alive to retain the title when the team scored a 1m13s win over a determined Finport Finance team (Keagan York, Angus Williams and Dan Phillips) which challenged for the entire length of the course.
Smeg (Micah Lane, Ricky Bridge, Peter Harris) was a further 3m44s further back in third place, followed by championship leader Tech2 (Jack Macartney), Rag & Famish Hotel (Bryce Edwards) and Appliancesonline.com.au (Brett Van Munster).
With two short-course races scheduled for next Sunday's final day of the Australian Championship, Tech2 (after each team discards her worst performance to date)  leads the points table on 15 points, followed by Finport Finance and Shaw & Partners on 23, Smeg and Appliancesonline.com.au on 28 and The Oak Double Bay-4 Pines on 31.
After a short delay while a large cruise ship moored in the middle of Sydney Harbour, Shaw & Partners easily won the start from the pin end of the line and quickly opened up a break over the rest of the fleet, which was headed by Birkenhead Point Marina (Tom Anderson) and Noakes Blue (Yvette Heritage).
While most of the fleet elected to sail a course towards the middle of the harbour on the long windward leg to the Beashel Buoy, the Shaw & Partners team stuck closely to the northern shore in the 5-10 knot NE breeze.
When the fleet reached the Beashel Buoy, Shaw & Partners held a 27s lead over Finport Finance with Rag & Famish Hotel another 13s back in third place.
Smeg and Birkenhead Point Marina were also in touch with the leading group but there was a break over most of the fleet headed by Vintec (Kirk Mitchell) and Noakes Blue.
The two leaders chose different tactics at the wing mark where Finport Finance gybed inside Shaw & Partners and gained slightly on the run between the islands to the bottom mark off Clark Island.  The lead at that point was down to 15s.
The first four positions had remained unchanged on the run from the windward mark, but The Oak Double Bay-4 Pines improved her position as she moved up from 8th to be in a handy fifth place.
On the following windward leg back to the Beashel Buoy, an outgoing tanker played havoc with the fleet and allowed the two leaders to get away from the challengers.
Worst affected was Smeg which was unable to cross ahead of the tanker and lost valuable time, as well as any chance of reducing the lead.
It was now a two boat race over the remaining legs of the course.  Shaw & Partners continued to hold the 15s advantage over Finport at the second windward mark then consolidated the lead with an outstanding spinnaker run down the middle of the harbour to Clark Island.
With a 45s break over Finport Finance and only one lap of the course to sail, the Shaw & Partners team were never troubled as the crew sailed faultlessly for their 1m13s victory.
Over the final lap of the course, spectators on the League's spectator ferry were treated to a close up look at the GP50 boats as they practiced for next week's event on Sydney Harbour.
The final two races of the Australian Championship will be sailed next Sunday.
Spectators can see all the teams while they are rigging, then follow the racing on board the club's spectator ferry, which leaves Double Bay Wharf, alongside the rigging area, at 2pm.
Book online through the club's website www.18footers.com
AeroMedia Live Broadcast team will be out on Sydney Harbour to capture all the action.  For those who can't make it onto the water, live streaming is available at www.18footers.com and clicking on the '18 Footers TV' link.
– Frank Quealey/18 Footers League