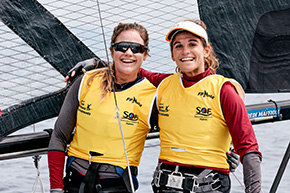 The Olympic classes regatta in Hyeres is over for another year and the medals decided, with Poland successful in the ILCA 6 and 49er classes, France winning both the Women’s and Men’s iQFOil, Italy again taking Nacra Gold and a 15 year-old showed them all in the Men’s Kitefoil.

Barwinka stitched up Gold before Medal Race
Poland’s Agata Barwinska had no pressure in all senses, with the gold medal in the bag already on Friday and only 2-3 knots at times in the Medal Race. Despite a lead of 21 points over second placed Marie Barrue (FRA), she had to wait until 21:05 on Friday night for the results of a protest until she could celebrate.

Barwinska: “In the Medal RaceI didn’t have to worry; I didn’t have any pressure. I was sixth and I was trying to not get anybody in trouble, because I’d already won. I wanted to leave them to sort out their things and stay away from them.”

Kontides wins ILCA7 battle of the quartet
Despite stiff competition, the ILCA 7 lived up to its billing as the Medal Raceof the day with Pavlos Kontides, the first Cypriot to ever win an Olympic medal (Silver at London 2012), emerging from the mêlée victorious.

Just three points separated four boats at the start and it was a winner-takes-all battle for top three of Germany’s Philip Buhl, Kontides (the two level on points) and Britain’s Michael Beckett, two points behind. Fellow Brit, Elliot Hanson, was just one point further back.

Hanson won the Medal Racebut Kontides did what he needed to do, with Beckett, the winner in Palma, back in fifth and Buhl, the 2020 world champion, stuck at the back for the third race in succession.

Kontides: “It started light and got lighter. It’s always tricky in these situations, because you gain, but you can also lose. If you’re off the podium, you feel really gutted. It’s one of these situations in sport where you feel that you should have four medals.

“I’m really happy. It’s been a hard couple of years for me, especially after Tokyo. Before Tokyo I had issues with my health and it was pretty hard to perform in some events. I was ready for Tokyo and I just missed the podium.

“I became a father in December and I’ve tried to enjoy my sailing. I ran out of fuel in Palma and I felt better here and I’m really grateful for being able to perform well here. The wind just died and there was a lot of tacking and gybing and you never know if somebody will get flagged or not. I think we were all pushing the limit of the rules, maybe even beyond the limit.

“The last reach it was stressful, because he (Hanson) was kind of waiting for me because his chance was to make me lose places from behind, but it’s always tricky because he might lose as well. Eventually he had to give me room. The third boat was Matthew Wearn (Olympic champion from Australia) and it was important that he didn’t pass me.”

They led by nine points from Vilma Bobeck/Rebecca Netzler (SWE). The Brazilians, who finished sixth in the Medal Race, covered the Swedes and did not look back.

The Swedes got stuck and finished second to last in the race, leaving Stephanie Robe/Margaret Shea (three points behind the Swedes at the start) to take Silver by finishing fifth.

Grael: “We’re relieved. We had a very stressful Medal Race with no breeze. We started with 5-6 knots and then it dropped to almost nothing.

“We had the Americans and Swedes close and not too many boats in the middle. It just the last downwind that was nerve-racking because we decided to do a split and I think that was a bit of an unnecessary risk! In the end it worked out fine but maybe I would have taken that back.”

Poland confirms second gold
Leading by 17-points overnight, Dominik Buksak and Szymon Wierzbicki (POL) had won the 49er gold medal two minutes after the start when one of the French boats was OCS ‘d, meaning the Poles could not be beaten.

Behind them a battle for Silver raged. Nevin Snow and Maximiliano Agnello (USA) prevailed in their match race at the back of the fleet with France’s Erwan Fischer and Clement Pequin, who took Bronze.

Buksak: “It was a nice race for us because about two minutes after the start we knew we’d won because the French team was disqualified and there were not enough boats on the race course to create enough gaps between us and the Americans for them to beat us.

“After that, because we didn’t have the best start, we were just trying to catch up with the boats in front of us and gained some positions. It’s probably one of our biggest wins!”

Full story and all final results at: https://sof.ffvoile.fr/results/