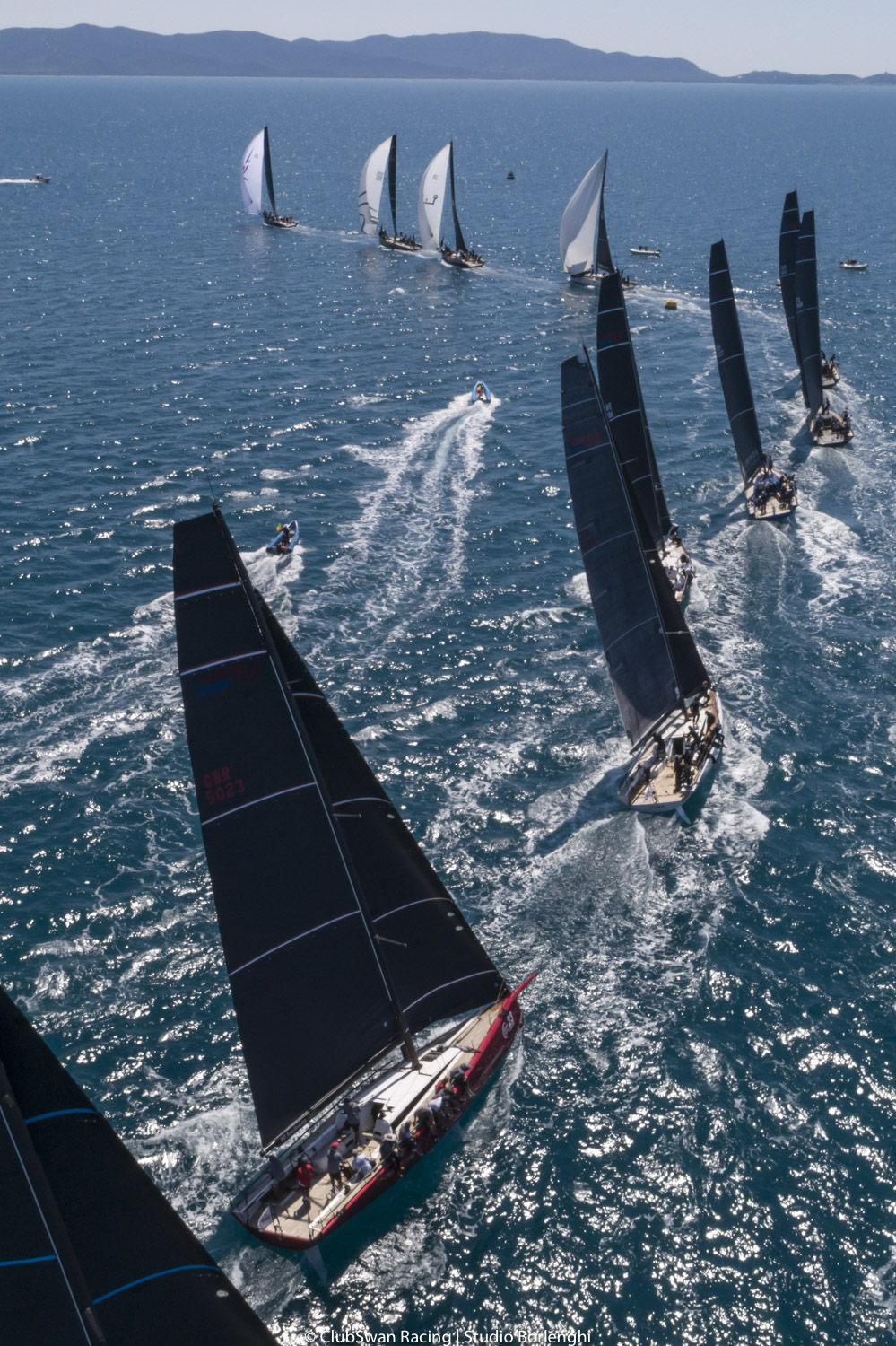 The ultimate destination of the winners’ trophies at the Swan Tuscany Challenge went down to the wire today, with the final results still in the balance on the last legs of the concluding races.

Going into the deciding ClubSwan 50 race Marcus Brennecke’s Hatari led August Schram’s Stella Maris by just three points. Schram’s team went for broke and led the fleet on several occasions, but ultimately had to settle for second place – with the ever-consistent Hatari right on her transom to take third place and the overall win.

Meanwhile the winner of the 10th and final race, Alberto Franchi’s Giuliana, leapfrogged both Balthasar – the winner of today’s first race – and Cuordileone to secure 3rd place on the podium.

Hatari’s victory was all the more remarkable as they were able to comeback from a poor start on the first day of the regatta when they were penalised for a racing infringement.

Brennecke recalled: “It started badly for us on the first day. After that we tried to play our game and the next day we won the first race by a one-minute margin, and then we just tried to sail consistently.

“The competition got closer and closer, everyone is improving which is great for the class – like August Schram second with three first places so it got very tight at the end, and Giuliana third, a great week for them also.”

And he added: “It’s great when everything comes together and it has been a fantastic week, so we are very, very happy.”

Hatari’s triumph on the Gulf of Follonica also helped Germany to the top of the 2022 Nations League table. Her combined tally with Hendrik Brandis’ Earlybird saw them tied on 20 points with the two best performing yachts representing Italy, the ClubSwan 50s Giuliana and Cuordileone, while G-Spot and Moonlight flew the flag for Monaco in third place.

The ClubSwan 36 class was also of an equally close fought contest, with Giangiacomo Serena di Lapigio’s G-Spot bringing their A-game to produce a 1-2 scoreline in the final two races to overhaul the overnight leader Mamao.

Haakon Lorentzen’s Brazilian team finished the Swan Tuscany Challenge in style, with Mamao winning the last race, but a fourth place in the first race of the day left them two points adrift of G-Spot at the finish. Mehmet Taki’s Turkish-flagged Facing Future took the third spot on the podium.

Asked what the secret of G-Spot’s success was, Giangiacomo Serena di Lapigio said: “I’m the oldest person in the fleet and this is our second year, so I would say we have a little bit of experience, and a little bit of luck, and also it’s been good.

“There is no secret. We always try to win and sometimes you succeed and sometimes not. Today we had two consistent results, first and second, that we really needed.

“I would say that the feeling in the fleet is that the level is higher than last year. We have a couple of new entries who are really good, especially the Brazilian team who are very, very good sailors, and also the Turkish team who came up this year. Other teams will be joining us later in the season, so we will have 10 or 11 boats, all at a very high level.”

The Swan Tuscany Challenge has delivered five days of exhilarating racing and set the bar high for the whole of the 2022 ClubSwan Racing season. The fleet will gather again at the end of next month in Villasimius for the Swan Sardinia Challenge.