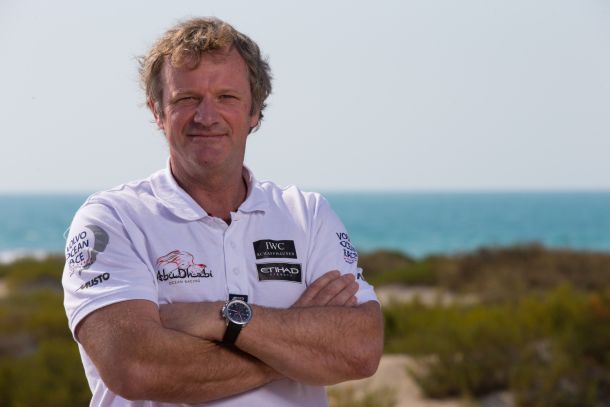 ABU DHABI, January 1 – Neal McDonald, the performance director of Abu Dhabi Ocean Racing, has been pulled out of retirement to join the crew for the third leg of the Volvo Ocean Race starting on Saturday.

The 51-year-old Briton completed his sixth edition of the 41-year-old event in 2011-12 with Telefónica and announced he was quitting as a sailor in the Volvo Ocean Race.

But a hand injury and mysterious bug has forced out Australian Phil Harmer and McDonald was the obvious choice to step in.

He will be competing in his seventh race to join Swede Roger Nilson and the current Team Brunel skipper Bouwe Bekking (NED) as holding the record for most appearances in the event.

“We need Phil back, we need him in good shape. I think if we were looking at it in another perspective, if this was the last leg, Phil would probably do it, but we’ve got to look at the big picture, we want him to get back at 100 per cent rather than at 95 per cent, and he needs time to do that,” said McDonald. “I’m excited, probably more nervous to be honest, I don’t want to let the guys down, so there’s a bit of that about it.

“I’m pleased I’m not going into the Southern Ocean, and I’m pleased it’s one leg not eight. I think it takes its toll on your body and it’s a long term thing that slowly drives your body more and more into submission, so I’m glad I’m only doing a one-legger.”

Several of the other teams have also made changes for the in-port race, which takes place at 1100 UTC on Friday, and subsequent Leg 3 departure for Sanya, China, on Saturday, also at 1100 UTC.

Team SCA’s bowman Sophie Ciszek (AUS) has been forced out with a back injury and Liz Wardley (AUS), who is being rested as part of the team’s normal crew rotation. Sara Hastreiter (USA) and Sally Barkow (USA) both return.

The 4,670 nautical mile third leg is one of the most hazardous in the nine-month race, partly because some of the polluted routes the boats must negotiate especially the Straits of Malacca between Malaysia and the Indonesian island of Sumatra.

The fleet, minus Team Vestas Wind which was grounded on an Indian Ocean reef midway through Leg 2, is due to arrive in Sanya around January 24-25.