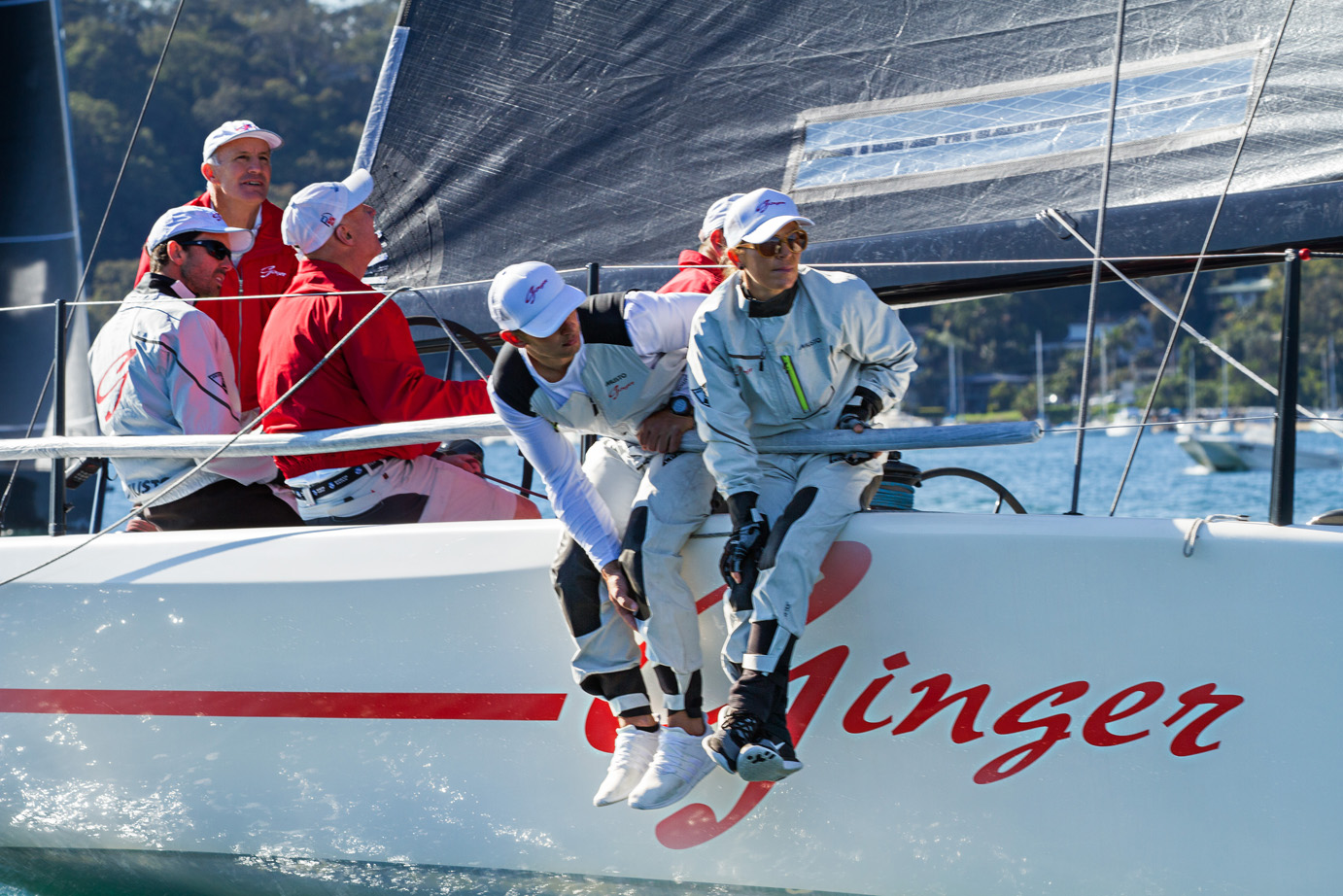 In the absence of their divine leader Leslie Green, team Ginger consolidated and extended their MC38 Winter Series lead in another day of light winds on Sunday July 16, 2017, to clinch the third stage win by five points.

Marcus Blackmore’s Hooligan switched gears and guest tactician Seve Jarvin made savvy calls in the two races in patchy WSW breeze to finish North Sails boat of the day and second overall, just a point in front of their RPAYC clubmates on John Bacon’s Dark Star.

Back at the Royal Prince Alfred Yacht Club after racing, Ginger’s helmsman Julian Plante said, “We had a good calm bunch and had the confidence in what we were doing to come back yesterday, and today.  Both races today we didn’t get around the first mark in great shape but we knew our turn would come and we stayed true to the plan.

“Light airs have been a bit of an Achilles heel and we’ve been working on it this winter. Today we found better speed and we had the confidence to play the percentages.”

On Colin Beashel’s vast knowledge of the Pittwater waterway and its nuances, particularly in winter, Plante added laconically, “He knows his way around out there. He’s such a calm guy but decisive, and makes the right moves. You forget what he’s done sometimes, he’s so calm,” Plante added, referring to Beashel’s credentialed sailing past including six Olympic Games, a bronze medal and one of the winning America’s Cup crew on Australia II in 1983.

Just back from Marstrand in Sweden and the second round of the World Match Racing Tour is Ginger’s long-time bowman Matt Stenta, who is part of the DownUnder Racing team.  “Next year we are aiming for a tour card and we’ve just bought two M32s; fingers crossed that helps our training for next year’s tour,” said Stenta. On sailing with the Ginger crew he added, “I’m just a massive sponge taking it all in from the greats”.

A first and a second in the two races – the second shortened at the second top gate as the breeze went into transition before eventually swinging to the north much later in the day -were enough to move Hooligan into the runner-up position. Peter Johnson helmed in Blackmore’s absence and spoke highly of guest tactician Seve Jarvin.

On his first Hooligan outing Jarvin said, “We got off the start line well and the team did a really good job. The boat was fast and the sails went up and down nicely. Today you couldn’t try to cover, you had to back yourself.”

Monday morning at 6am, Jarvin and a number of other MC38 sailors will meet at the Royal Sydney Yacht Squadron for an early morning training session in preparation for the Etchells World Championship 2017 in San Francisco in September.

Ross Hennessy and Ghost Rider returned to MC38 class racing on Pittwater after an extended break and finished up fourth overall. “It’s hard to get a consistent crew together,” the skipper admitted. “We are trying to wind up, to get as good as the crews who have been together for a while.”

The fleet will take a break in August, so many of the owners and crew can sail on other boats at Airlie Beach and Audi Hamilton Island Race Week, and return September 16-17 for the final act 4 of the MC38 Winter Series.

So far Maserati has scored one stage win and Ginger two.