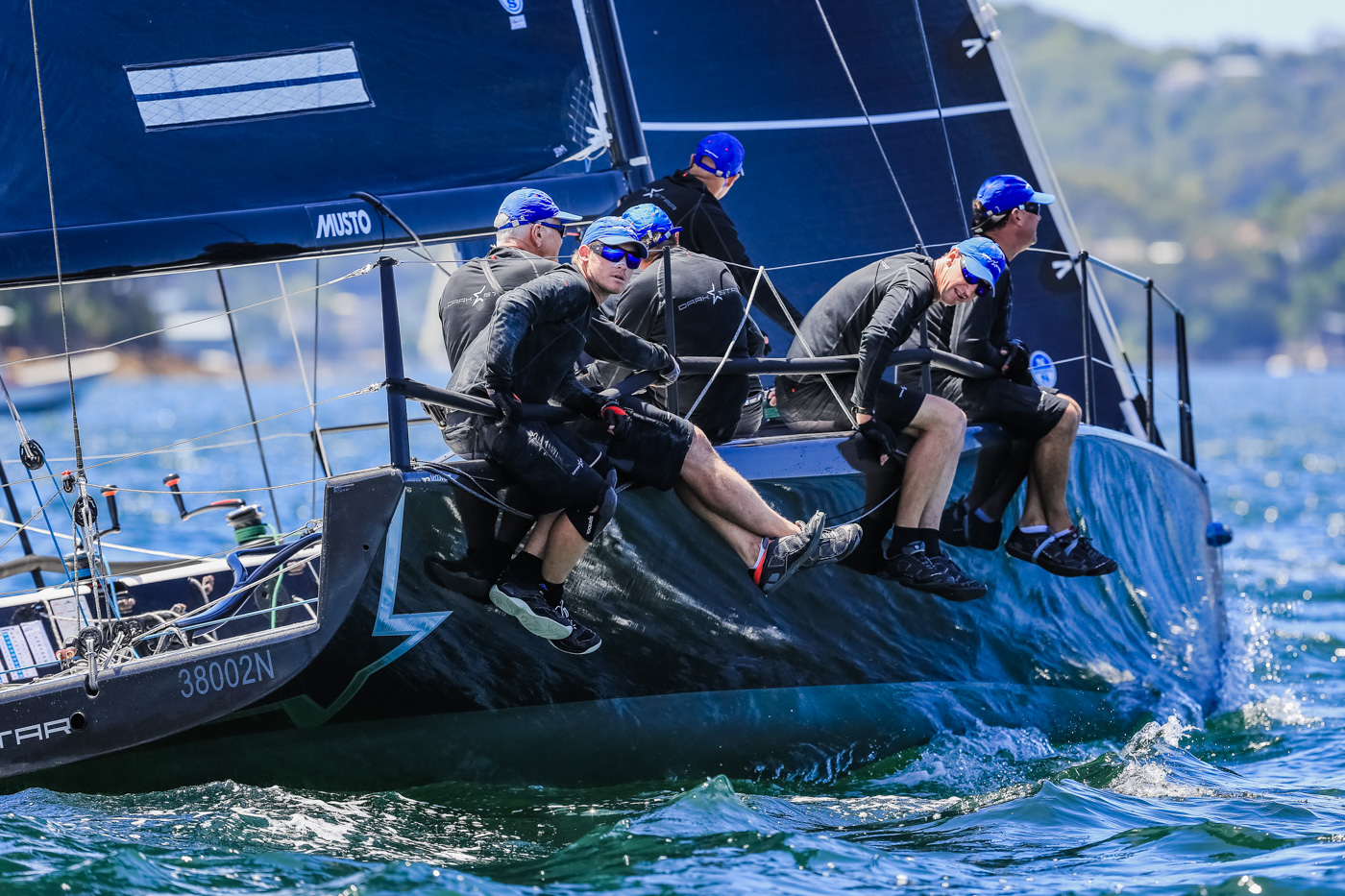 Six races into the MC38 class’ 2016 Australian Championship the pointscore is tighter than a tenor’s trousers.

Howard Spencer’s Menace (NZL) leads John Bacon’s Dark Star (RPAYC) by one point four races shy of the series’ conclusion tomorrow, Sunday February 6, 2016, and the top Aussie tactician grants it would be “extremely annoying” if the Kiwi team were to add their name to the perpetual trophy.

So far the national title has, rightly, been won by nationals; Dark Star, Voodoo Chile, and Ginger, twice. Last year’s Australian Season Champion Menace was always going to be tough to keep out, now they have a fight on their hands.

“We are up there again with Howard,” nodded Dark Star’s tactician Cameron Miles adding, “and yes it would be extremely annoying if they were to become Australian champions. We are going to try and not let that happen.”

Dark Star’s crew turned an average day one yesterday into a ‘boat of the day’ deserving performance. “We had to start really well and make sure we were in touch at the top, and we did that three out of four races and that’s kept us in the game,” Miles said. “We know we are quick enough to win with the new sail program, we are sailing upwind quicker and higher. We’ve also changed the way we tack the boat and that’s working well, we’ve just got some spinnaker hoist and drop work to do. Tomorrow should be good fun; it’s very tight at the top.”

After a poor final race that began with a daring fly-by the committee boat just a smidge too early, two-time defending champion Ginger faces a seemingly insurmountable five point gap to the lead boat.

“Five points….we are still in it,” said Ginger’s optimistic tactician David Chapman. “We know what we are good and bad at, we’ve got to come out and get four bullets tomorrow and hope other things go our way. Tomorrow should be lighter, we like the light air. A couple of other boats had a really good day and that’s great for them.”

Playing the Pittwater shifts and solid crew-work delivered race victories to Chris Hancock’s Vino, Leslie Green’s Ginger and the double to Dark Star on a lighter second day. Sou’easters averaging 8-12 knots and flatwater on the racetrack between Morning Bay and the eastern side of Scotland Island provided terrific conditions with none of yesterday’s spoilers.

Hancock’s settling a new crew in and says after being out of phase yesterday, today they found their mojo. “We haven’t been on the boat since the last regatta and we have a lot of new crew including a new tactician, Murray Gordon. It’s a matter of getting everyone settled down. We are doing well enough to feel comfortable and confident and over the next few regattas we’ll press them. The fleet is so competitive now, you get on the wrong tack and it’s pretty much game over in this company.”

He thought the race management team led by the Royal Prince Alfred Yacht Club’s Principal Race Office Steve Merrington did an outstanding job running successive starts using the same line for the MC38s then Etchells and lastly the sports boats. “It all worked out well with the other fleets, Steve did a really good job of marshalling and the whole thing was very well governed.”

Race 5 kept the umpiring team of David Tallis and Richard Slater busy blowing whistles and pointing flags at the infringers. A dramatic top gate hook up between Hooligan’s protruding bowsprit and Ginger’s stern looked worse than it was with only some paint scraped off Ginger after the two crews separated the boats. As Hancock pointed out back at the dock, it’s the on-water umpiring that’s helped build the class’ strong camaraderie.

Tomorrow’s forecast for Sydney closed waters is south to sou’east 10 knots. To make up for the shortened opening day, four races are planned with the first due to start at 1100hrs in the same vicinity. Harken Australia is hosting a crew BBQ at RPAYC after racing, part of the final trophy presentation where McConaghy Boats managing director will present the perpetual trophy to the new New Zealand or Australian Australian champion MC38.