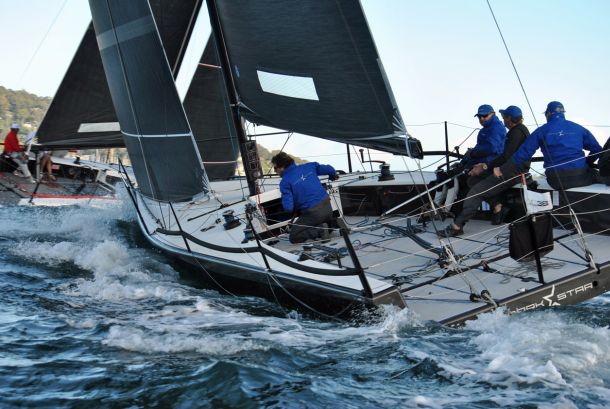 Vitamin kingpin Marcus Blackmore is used to winning in business and yacht racing. Nine months as the owner of his latest yacht called Hooligan, a polished black MC38, and he’s in control of the class’ Australian Championship on Pittwater.

Hooligan leads with four points and the next three, John Bacon’s Dark Star, Chris Hancock’s Vino and Leslie Green’s Ginger sit behind, all finishing the day on 10 points.

“Credit goes to Beasho without question, he had a blinder,” Blackmore praised, referring to his tactician Adam Beashel who grew up on Pittwater and went into professional sailing at the highest level, the America’s Cup as a key Emirates Team New Zealand crewman.

Hooligan scored 1,2,1 on a changing track north of Scotland Island. “We didn’t lead these races, we just plugged away and got back in the game,” Blackmore said. “It wasn’t easy to steer today. I never once looked at the wind angle; I was fixed on the boat’s heel angle all day. Beasho has changed how we sail downwind plus we have a consistent crew; there’s no question we are faster.”

Beashel agreed he had a good feel for downwind performance today, “Things fell into place,” he smiled wryly.  In this game and this fleet the difference between opening scores and final results can be eternity. And Beashel knows it.

Up to twenty knots of SW breeze in the second race fizzled out and delayed the start of the third race by more than two hours. The race committee and the fleet of eight MC38 one designs went chasing the wind back and forth from Clareville across to Pittwater’s western shoreline around Morning Bay with the postponement flag flying. Principal Race Officer Steve Merrington went into one sequence then abandoned that start as the wind twisted around the southerly bearing.

Further down the coast Sydney Harbour was showing consistent breeze but frustratingly it didn’t make it to Pittwater until a dark line appeared promisingly out of the sou’east corner. The committee set up a short course in anticipation and went into sequence after 3pm with the sun dropping over Kur-ing-ai Chase National Park, a relieved PRO finally able to say to crews “let’s have a crack!”.

Skipper of the third placed Vino, Chris Hancock, said, “We had a good day and we are very satisfied.  It wasn’t easy racing, a lot of concentration was required. If you got on the wrong side of the course it was pretty much game over. Hooligan did a fantastic job, they were very impressive. At this stage they have taken control but there’s still seven to go. Racing as always was very tight, one misjudgement and you are back in the field.”

Tomorrow’s forecast, Saturday April 11, 2015 is south to south-westerly around 10 knots becoming south-easterly in the middle of the day then north-easterly later. Another four races are scheduled, the first due to start at 1100hrs in what’s likely to be the day’s best conditions.

After racing host Royal Prince Alfred Yacht Club welcomed crews and their families back to the clubhouse on a Sydney stunning autumn afternoon to enjoy a snag in bread with some dead horse [Aussie slang for tomato sauce] and a well-earned drink courtesy of regatta sponsor Harken Australia.