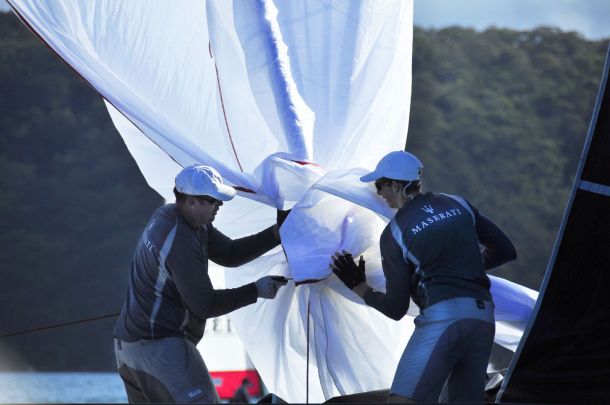 ‘Beasho’s’ blinder turned into ‘Chappo’s’ champion effort to move Ginger into the lead by a single point on day two of the 2015 MC38 Australian Championship.

Ginger’s owner Leslie Green, tactician David ‘Chappo’ Chapman and crew scored 3,1,1,3 in the 5-8 knot ENE wind on a new course between Portuguese Beach on the national park side of Pittwater and Stokes Point at Careel Bay on the peninsula side. The final third was a momentous fight back by Ginger, sailing for the Cruising Yacht Club of Australia, after two penalty turns were ordered by the on-water judges.

At 26 Chapman is the youngest tactician among the one design fleet and skipper Leslie is the senior of the owner’s group.  They are also the defending MC38 Australian champions and in the back of ‘Chappo’s’ mind is a third Aussie title from four attempts.

At the inaugural title Chapman was part of the winning Voodoo Chile crew, last year at Hamilton Island Ginger prevailed and on the eve of the 2015 series’ four remaining races Green’s team is one of tight-knit trio at the head of the progressive points table.

“This team likes the light air,” Chapman said dockside at the RPAYC. “Though it was a tricky day we kept it simple, everyone stayed calm and did their job. We backed ourselves today more than yesterday when we probably played the fleet too much. It paid off. The racing is so mentally challenging, I’ve got a headache.”

Green joked, “Maybe it’s a good thing for us to get penalties, it wires us up.  Really it’s about going the right way and not making mistakes and if you do then just get on with it, then it’s not hard to win. Doors open and doors close.”

John Bacon’s Dark Star, sailing for the host Royal Prince Alfred Yacht Club, won the championship two years ago. Given the training regime coming into the title was light on, tactician Cameron Miles says picking up a few shifts upwind today and a good team who get on well and keep it together during the setbacks accounts for their second overall, one point in front of Marcus Blackmore’s Hooligan.

“We had a couple of poor starts but scrambled back….scrambling is our speciality!” said Miles. “We had our own issues, so did everyone else and that’s the beauty of these boats. If you minimise your errors you are likely to have a consistent day. I said to the boys ‘if we practised we’d be dangerous’. Now we just have to keep our momentum going.”

Miles’ magic and Chapman chipping away plus Hooligan’s own mixed results put yesterday’s standout back into third, on equal 19 points with Dark Star. Chris Hancock’s Vino was in their good company until an OCS in race six and a fifth in race seven knocked them back to 26 points and fourth overall.

Neville Crichton’s Maserati crew carries plenty of individual sailing clout but in this fleet they are hurting due to a lack of time on the water in a new class. Race four was a nightmare, first a spinnaker tore then they hooked a top mark on the last lap and began dragging it under the boat.

Still, they pulled off a bullet in the final race seven and tactician Michael Coxon reckons, “It’s better to end on a good race than the other way around, you feel a lot better. We are suffering from lack of match practice, the smooth boats have put the time in and we need to do the same to catch up to them.”

Crews were held ashore for hours under a lengthy postponement that was eventually lifted after 1pm, more than two hours after the planned first race start.