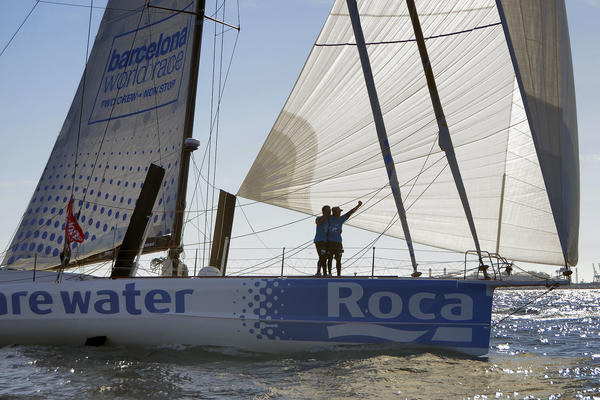 Theirs was one of the most epic battles of the Barcelona World Race, exchanging places with One Planet One Ocean & Pharmaton throughout almost the entire 23,000-mile course. As We Are Water entered the Mediterranean three days ago they were fewer than 60 miles behind their long-term rivals, closing to just 44 miles as strong headwinds tested both teams. But while ultimately fourth place may have remained just beyond their grasp, fifth place, non-stop, remains a phenomenal achievement for this duo, who bring a Corinthian spirit to the race, both working in demanding professions as well as building exemplary sailing careers.

Brothers Bruno and Willy Garcia may have a lifetime of shared experiences between them, but they began their preparation for the Barcelona World Race just three months before the start. Taking a well-proven boat (the winner of the 2007-08 edition of the race), with a succinct campaign and training plan managed by the FNOB, they hav e exceeded their objectives through teamwork, focussing on the essentials and sailing conservatively when required.

The duo sailed an actual distance of 28 292.73 miles in 99 days, 3 hours, 6 minutes and 28 seconds, at an average speed over the ground of 11.89 knots. They arrived 14 days, 21 hours, 16 minutes and 3 seconds after the winning boat, Cheminées Poujoulat, skippered by Bernard Stamm (SUI) and Jean Le Cam (FRA), who arrived on March 25th at 18.50 local time (17.50 UTC). Second went to Guillermo Altadill (ESP) and Jose Muñoz (CHI) on Neutrogena and third to fellow Spanish skippers Anna Corbella and Gerard Marín on GAES Centros Auditivos, while fourth placed Aleix Gelabert and Didac Costa (ESP) arrived home the previous day on We Are Water.

In honour of the Garcia brothers’ achievement, Jean Le Cam, Gerard Marín, Aleix Gelabert, Dida c Costa, Pepe Ribes and Andor Serra welcomed them into Barcelona onboard the winning IMOCA 60, Cheminées Poujoulat. Prolonging the agony – or protracting the enjoyment – of waiting to finish in their home city, the final hours of We Are Water’s race were drawn out by light south-easterly winds that saw them make slow progress home over the course of today, zig-zagging just a mile or so off the coastal marshes of Llobregat. We Are Water crossed the line in sparkling Spanish sunshine at 15.06 UTC (17.06 local time), before arriving at a festive Portal de la Pau with crowds waving balloons and flags to welcome the Barcelona pair back to landfall.

We Are Water’s race reviewed:

From Barcelona, We Are Water took the most easterly course of the fleet, passing close to Ibiza, alongside Spirit of Hungary. The decision brought them lighter winds than the leaders, and they passed Gibraltar on January 3rd in sevent h place about 100 miles back from One Planet, One Ocean & Pharmaton.

At the Canaries We Are Water opted to leave the archipelago to the west, and the strategy paid off – as they headed south into One Planet One Ocean & Pharmaton’s slipsteam they had reduced their advantage by 40 miles.

We Are Water set off in hot pursuit across the North Atlantic, and on January 12, around the latitude of 5°N, Bruno and Willy Garcia overtook to move up to sixth place. Heading towards South America, We Are Water began to gradually pull away in the south-easterly trades and as they turned eastwards on January 19 were about 200 miles ahead.

They were also gaining miles on Renault Captur in fourth, some 280 miles to the east but suffering lighter winds closer to the St. Helena high pressure system. Initially the Garcia brothers gained miles to the south faster than Jörg Riechers and Sebastien Audigane, but onc e the duos had cleared the influence of the St Helena High, Renault Captur picked up 25-30 knot north-westerlies, while We Are Water was left lingering in weaker south-easterlies, over 400 miles to the west.

Across the South Atlantic, Bruno and Willy were virtually equidistant between Renault Captur and One Planet, One Ocean & Pharmaton, all three in different weather systems. On January 27th they first entered the ‘Roaring Forties’, and clocked up a 17.2-knot boat speed average in 24 hours. They passed their first ‘Great Cape’, the Cape of Good Hope, on January 30 at 11:08 UTC.

Heading into the Indian Ocean they continued to extend away from their Spanish compatriots, and by the time they were halfway between Good Hope and Cape Leeuwin were ahead of One Planet One Ocean & Pharmaton by more 1025 miles.

But despite being in different weather systems, One Planet One Ocean & Pharmaton staged a impressive co meback in the Deep South, and as they passed Cape Leuwin on February 15th had reduced the Garcia brothers’ advantage to around 700 miles. Renault Captur, however, had also extended and were 1,000 miles to the east, looking uncatchable – until, that is, Jörg Riechers and Sébastien Audigane announced a couple of days later that they would be heading to New Zealand for repairs. By the time Renault Captur made landfall, We Are Water had already passed their latitude and moved into fourth place, whilst One Planet One Ocean & Pharmaton had closed to just over 350 miles: the battle was on.

In the Pacific the two teams were sailing within the same weather systems, and the game  became one of strategy as well as speed. We Are Water found themselves on the wrong side of a storm, and by dawn on February 23, as the brothers completed their eighth gybe in 48 hours, One Planet, One Ocean & Pharmaton was just over 200 miles behind and averaging nearly 17 knots. Five days later, a powerful depression brought winds of 25-30 knots and Willy and Bruno clocked their fastest time of the race, averaging 17.6 knots over 24 hours.

The race saw two pairings racing along the limits of the AEZ: We Are Water and One Planet One Ocean & Pharmaton contesting for fourth, while GAES Centros Auditivos and Neutrogena duelled for second some 2000m to the east. As GAES Centros Auditivos passed Cape Horn, the two other Spanish teams were just 180 miles apart.

We Are Water passed the third ‘Great Cape’, the Horn, on March 7th at 22:06 UTC. Their pursuers followed just 4 hours and 55 minutes later, just 50 miles behind. The chase intensified in the South Atlantic, both boats sailing in parallel, frequently just 30 or 40 miles apart. On March 15th, 74 days after setting off from Barcelona, the pair crossed paths and took photos of one another. That night On e Planet, One Ocean & Pharmaton finally overhauled Bruno and Willy to emerge in fourth place. But the fight was far from over: We Are Water swiftly recovered to overtake again, around 1,000 miles off the coast of Brazil.

Crossing the Doldrums brought frustrations for both teams, averaging just 2 knots average. We Are Water opted for a more westerly route across, which initially looked favourable, but One Planet, One Ocean & Pharmaton were the first to reach the northerly trades, as Aleix and Didac moved 120 miles ahead.

We Are Water remained in touch across the North Atlantic, until the Gulf of Cadiz brought light winds and a last opportunity to creep to within 55 miles of fourth by Gibraltar. Heading into the Meditereanean the Garcia brothers were faced with a 35-40 knot easterly on the nose. The final punishing conditions, combined with rough seas, drove Bruno and Willy to seek shelter in the lee of a shore to hoist their storm j ib in the Gulf of Almería. But whilst the manoeuvre protected the boat, it confirmed that fourth place was finally beyond grasp. The duo finished in fifth place, one day after One Planet One Ocean and Pharmaton, on April 9th.

Bruno Garcia is big brother: five years senior to Willy at 47, and the more experienced of the two in ocean racing. This is Bruno’s second attempt at the Barcelona World Race – in 2010-11 he set off with this year’s winner Jean Le Cam on Président, before retiring when dismasted off the Cape Verde islands. A highly respected cardiologist, Bruno has twice finished fifth in the gruelling Mini Transat singlehanded race, and competed in three Solitaire du Figaro races.

Like his brother, Willy Garcia is married, was born in Barcelona and lives there to this day. A skilled jeweller, Willy has also competed in the Mini Class, including a ninth in the 2003 Transat, and two Sol itaire du Figaros. He raced together with Bruno in the Figaro class in the Transat AG2R 20 years ago, but this was his first round the world race.

A 2007 launch by Farr Yacht Design, We Are Water has an impressive pedigree in the Barcelona World Race, having won the inaugural 2007-08 event as Paprec-Virbac 2 with Jean-Pierre Dick and Damian Foxall. Three years later it was back, sailed to fourth place as Estrella Damm by Alex Pella and Pepe Ribes in 2010-11, and four years further on it has completed yet another round-the-world voyage, this time non-stop.

The boat carried the name of We Are Water, a foundation established to promote awareness of the need for sustainable management of the world’s water resources, in association with Roca. It is the second IMOCA 60 to carry the foundation’s message, following Jaume Mumbrú and Cal i Sanmartís entry in the 2010-2011 edition of the race.

Key dates for We Are Water