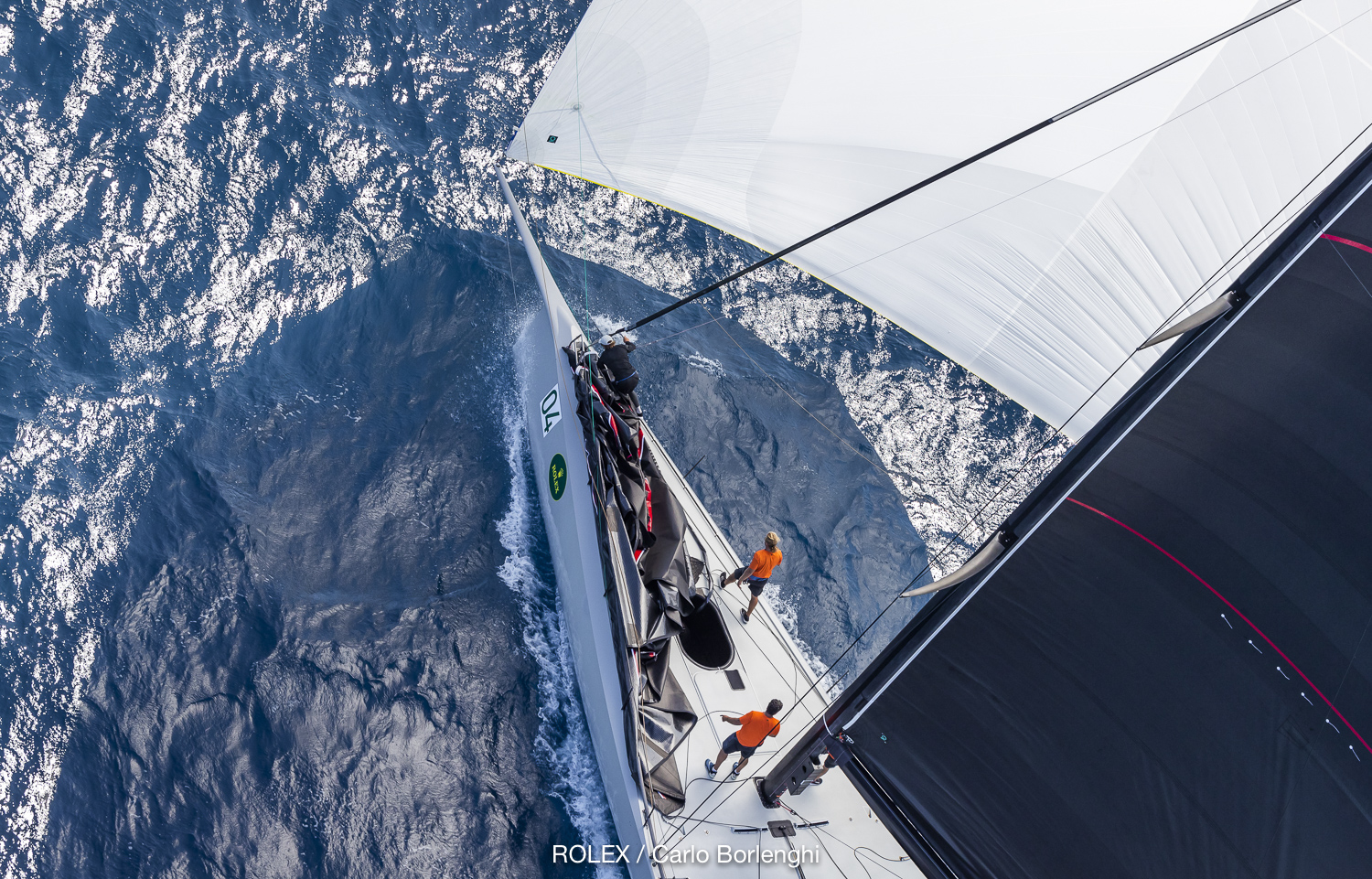 Forty-one yachts took part in conditions that failed to deliver only on Tuesday, when instability forced the Race Committee to postpone racing for the day.

Today the fleet completed a coastal race of approximately 30 miles in winds from the north west of 9 knots which gradually increased to 12 knots and brought the yachts to round the island of Spargi before returning to Porto Cervo.

The Wally Class sailed two windward-leeward races, won respectively by the Wallycento Tango and the W80 Lyra – the overall victor thanks to an enviable scoreboard, with two second places posted as their worst results.

A decidedly unexpected debut for the new owner of the yacht, Hong Kong-born Canadian Terry Hui: “I'm new to this world and I'm learning a lot. My biggest reward was meeting all the great people here, all the yacht owners,” he said.

“As regards my winning debut, I think we have a good team. We had a little bit of luck and my team compensated for my mistakes! It was really good, racing in Porto Cervo is beautiful and the Yacht Club especially is first class.”

Today Momo once again proved her supremacy by winning ahead of Proteus, with tactician Tommaso Chieffi, and Cannonball, with Vasco Vascotto on tactics.

Winner in the Super Maxi class was the J-Class yacht Topaz, followed by the other two participating Js, Velsheda and Svea. These majestic and elegant yachts, designed in the 1930s to compete for the America's Cup, sailed together with ultra-modern superyachts using the ORCsy system of compensated time.

However, using the ratings system designed specifically for the J-Class yachts, the winner would have been Svea.

Spain's Nacho Postigo, navigator on Topaz, commented: “It has been a beautiful and hard-fought week, and we are very happy, even if it was not easy, starting with the fact that we raced under the ORC instead of the J-Class rating system, and this forced us to make choices on our trim that were a bit risky.

“Today's race was also hard fought. At the start we were positioned perfectly and then Velsheda came in as always, who are much faster upwind, and stretched ahead. Then downwind we managed to recover, thanks to Tony Rey's tactical calls. At the end it was a real match race between us and Svea, it was like being in the America's Cup”.

The Maxi class was dominated by the Southern Wind 82 Grande Orazio, owned by YCCS member Massimiliano Florio, which clinched the win with a day to spare in front of Vera and Rambler.

“It was a long awaited victory,” explained Florio, “and well-deserved because we sailed really well, however, to have won a day early was so unexpected, in part due also to the favourable wind conditions for our relatively heavy boat. I am really happy with this result!”

Among the Mini Maxi group 1 boats, Roberto Lacorte's Supernikka had already mathematically ensured victory yesterday while the other podium finishers were the Swan 601 Lorina 1895 and Wallyño, owned by Benoit de Froidmont.

The situation was similar in the Mini Maxi group 2 where H2O, owned by YCCS member Riccardo De Michele had already won a day in advance and also received prizes as the top scoring YCCS member and IMA member.

Joining him on the podium was the Swan 65 Shirlaf owned by Giuseppe Puttini, and the Swan 651 Lunz Am Meer owned by Marietta Strasoldo.

The prize giving in the Piazza Azzurra was, as usual, very crowded. Present were Vice President of the YCCS, Paolo Baiocchi, President of Rolex Italy, Gian Riccardo Marini, newly-elected president of the IMA, Benoit de Froidmont, and Commodore of the Yacht Club Costa Smeralda, Riccardo Bonadeo, who in his introductory speech paid tribute to Willy Persico, founder and president of the Southern Wind shipyard.

He then declared: “Another edition of the Maxi Yacht Rolex Cup comes to a close, the next one will be the 30th and I'm sure it will be as exciting as this one. Sailing is an emotional sport for anyone who loves the sea, and once you start it's almost impossible to stop.

“Challenges and a love for the sea are the values that characterise our long relationship with Rolex and on behalf of the YCCS I would like to thank Rolex for their constant support.

“Our thanks go to all of you: owners, sailors, International Jury, Race Committee and staff. We all contribute year after year to this event which has become a benchmark in yachting.

“Working together we can also help safeguard the sea. YCCS with its One Ocean Foundation is promoting sustainable initiatives and we invite you to get to know our programme to protect the element that as sailors is closest to our hearts, the sea.”

The Maxi Yacht Rolex Cup opened a busy September which will see the YCCS engaged in numerous initiatives. On Monday, 10 September the Rolex Swan Cup will officially open with a Welcome Cocktail on the terrace of the clubhouse. Racing continues through Sunday, 16 September.

Tomorrow, Sunday 9 September, skipper Mauro Pelaschier, an Ambassador of the One Ocean Foundation founded by the YCCS to safeguard the seas, will visit nearby Cannigione with his wooden boat, Crivizza.

The YCCS together with the local sailing clubsArzachena and Cannigione have organised a public meeting to illustrate the Charta Smeralda and create awareness on the urgency of marine protection.

The open meeting will be at 8 p.m. at the Church Square in Cannigione. On Monday 10 September, a round-table discussion will be held with some of the leading businesses in the area ranging from hotels to marinas. The One Ocean Foundation will ask them to commit to a specific initiative aimed at greater sustainability.