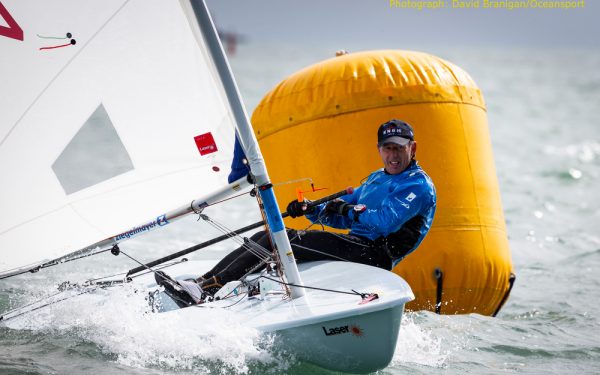 Dublin Bay served up a robust opening day to the Laser Masters World Championships sponsored by DLR for the 302 entries from 25 countries that nevertheless enjoyed the planned race programme of two races.

Defying winds gusting from 20 to 27 knots, Australia’s Brett Beyer in the Standard Master class, Britain’s Stephen Cockerill in Radial Grand Master and Bill Symes in the Great Grand Masters along Peter Seidenberg in the Legends event – both of the United States – all scored two wins each.

With consistency as key to the leaderboard, Monday’s second day is also expected to have similar or perhaps stronger conditions to test the eight divisions racing under Standard and Radial rigs.

Yet Beyer, Cockerill and Symes hardly have runaway leads at such as early stage of the regatta and each has a hunting pack close behind.

The Standard Grand Master class has Australia’s David Whaite tied for second place with Canada’s Ray Davies and Britain’s Orlando Gledhill just a point behind them in their 60-strong class.

For host nation interest, 1996 Olympian Mark Lyttle had a promising start to the Grand Master event finishing seventh overall for the day.  In the Master series, Nick Walsh lies 12th overall while Pete Smyth was third in the Standard Apprentice division.  Shirley Gilmore in the Radial Master was 23rd overall and fourth woman overall in her class.

Sunday’s opener came as a surprise for some competitors after two days of near calm and drizzle; the westerly wind produced a tricky day with frequent shifts in the gusts that led to plenty of capsizes and one or two minor injuries.  A rest day is planned for Wednesday when lighter breezes are currently forecast to arrive.