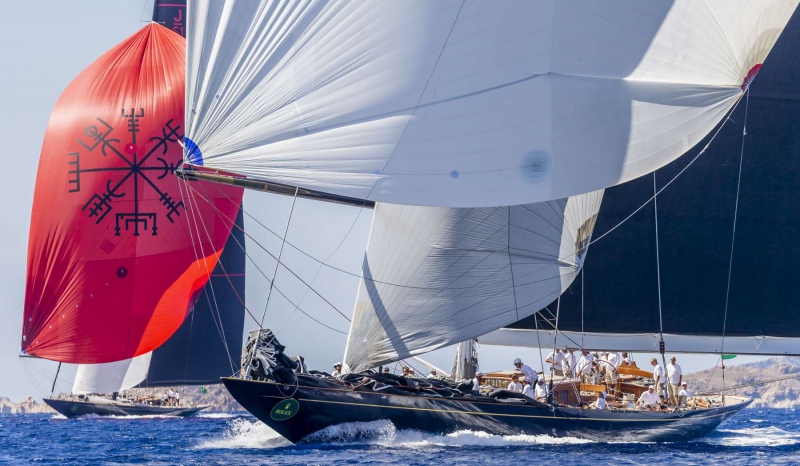 Porto Cervo, Italy. 3 September, 2018. The first day of the 29th edition of the Maxi Yacht Rolex Cup & Maxi 72 Rolex World Championship, organised by the YCCS with the support of the IMA and the collaboration of title sponsor Rolex, saw Sardinia at its best.

More than 40 participating maxi yachts enjoyed perfect sailing conditions with a mistral wind of 12 to 16 knots, with gusts of up to 18 knots at some points on the coastal route of approximately 35 miles that was set for three out of the six classes. The Mini Maxi groups 1 and 2 had a very similar but slightly shorter course, while the Maxi 72s, competing for their World Championship, faced two windward-leeward races on a different regatta course.

Reigning champion Momo, helmed by YCCS member Dieter Schoen with Marcus Wieser on tactics, immediately racked up two consecutive victories, followed by another Club member, Dario Ferrari at the helm of Cannonball, who took two second places. In third place on equal points are the American boats Lucky and Proteus. Michele Ivaldi, navigator on Momo, summarised the excellent debut: “We had a perfect day, one to remember, both in terms of our result which speaks for itself and the perfect conditions, typical of Sardinia, a little mistral and flat seas! On our race course we had wind of 12 to 16 knots, with a few shifts to the right, especially in the second race, ideal and manageable conditions. We got two great starts that gave us the opportunity to 'unleash the horsepower' of our boat, the choice of sails was perfect, the boat sailed very well so we were able to control the race from the end of the first upwind leg, we couldn't have had a better start.”

The Super Maxi category sees three J-Class yachts competing: Topaz, Velsheda and Svea, which respectively occupy the top three positions in the classification followed by the two modern Super Maxis, Vittorio Moretti's Viriella and Pier Luigi Loro Piana's My Song, the fastest boat on the water – but penalised in compensated time. Tactician Alberto Bolzan – the only Italian sailor to have taken part in the past two editions of the VOR, the tough round-the-world race – explained: “Unfortunately, the corrected time result didn't reflect the way the day went, we're really happy with how the group worked, with how the boat sailed and the choices we made so we're heading home with a smile. Over the next few days we will be working on the numbers to improve our performance on a boat that is already fantastic.

In the Wally Class Magic Carpet Cubed, clearly the star of the Wallycentos, dominated. Given the difference in length, the Wallycentos soon stretched away from the rest of the fleet doing battle on the course through the La Maddalena archipelago. As they approached the finish line a spectacular skirmish took place between J One and Lyra, however a subsequent protest led to the disqualification of J One, initially class leader. The new owner and helmsman of Lyra, Terry Hui, a Canadian born in Hong Kong, had an excellent debut.

Among the Maxis it was the Southern Wind Grande Orazio owned by YCCS member Massimiliano Florio that took the best corrected time ahead of the fastest yacht of the fleet gathered in Porto Cervo, Rambler, which finished in second place on corrected time. Third place went to Inti-3, the Wally 94 owned by Lauro Buoro.

In the Mini Maxi 1 group, the defending champions on SuperNikka immediately made their intentions clear on the regatta course, winning ahead of Wallyño and Lorina 1895. Roberto Lacorte, helmsman and the owner of SuperNikka: “A beautiful but challenging day, Spectre gave us a hard time, this year they have updated their sails, but that makes things more fun. We did what we promised to do and got the result. Our meteorologist Riccardo Ravagnan perfectly forecasted both the direction and intensity of the wind, in every part of the day. We had an average wind that went from 14 to a maximum of 18 knots, there were drops, passing inside the islands, but the intensity and direction were what we expected, and this allowed us to race with the right configuration.”

On this first day, the defending champion also won in the Mini Maxi 2 class: H2O, the Vallicelli 80 owned by Riccardo De Michele with Lorenzo Bodini on tactics, took victory ahead of two Swan yachts: the 65 ketch Shirlaf and the 651 Lunz Am Meer.

Tomorrow crews will meet at 9 a.m. in Piazza Azzurra for the daily weather briefing from Quantum Sails. Racing will continue at 11.30 am with a forecast of very light and unstable breeze. The Wally Class will be given a windward-leeward course, while all other classes will complete a coastal race. As usual, on their return to shore crews will gather for after-race refreshments in the Piazza Azzurra.