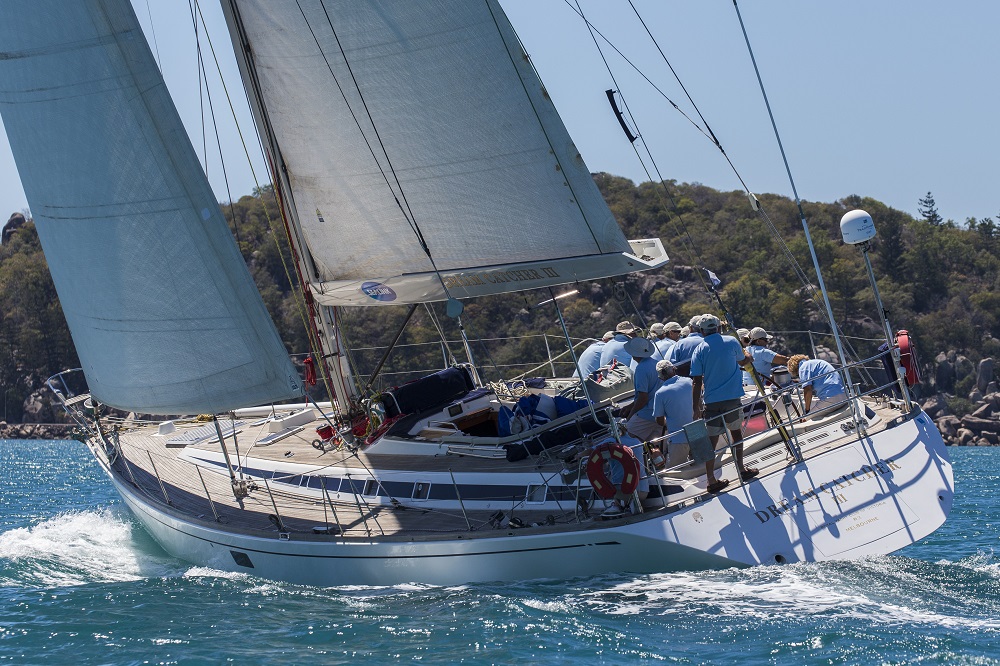 A delay ashore as race officials waited for the wind to fill in – and finally competitors heard the sound signal they were waiting on – and racing got underway in a light breeze at 12.40pm at SeaLink Magnetic Island Race Week.

So far, the Townsville Yacht Club hosted event has dished up light airs for all three days. And what a contrast of conditions between those on the windward/leeward course and the rest on a longer Bay type race to White Rock today.

The IRC and SeaLink Spinnaker Division 4 boats sailed windward/leeward races. They got the best of the breeze, with all weight on the rail of Paul Clitheroe’s Balance and her chaser, the Kiwi entry Miss Scarlet (William Goodfellow and Graeme Wilson), as the pair surged upwind in moderate breezes closer to Nelly Bay.

David Fuller’s smaller Vamp was giving chase and keeping the pair in close contact. Fuller, from Sydney, who is celebrating his 75th year here at his first ‘Maggie Island’ Race Week, is on a winning streak, and made it a hat-trick by winning Race 3 today, only to capitulate to Paul Clitheroe’s Balance in Race 4 – by a mere 46 seconds.

“The first race the legs were 1.6 nautical mile legs, the second race’s legs were a shorter 1.2 miles, and they just got us, but we’re having a great run here. We had a real nibble at Balance and Miss Scarlet a couple of times,” a thrilled Fuller said.

“We have a pole, the other two don’t – so we were able to get our asymmetrical up and run deeper in both races,” he said.

“We had a port and starboard incident with Miss Scarlet – we threw up our protest flag and they did their penalty turn, so that was good.”

Dick Cawse, sailing with Fuller said their conditions were stable. “We had a steady average of 10 knots – it nearly reached 12 at one point. It was very steady,” he said. “I’m really enjoying my first Race Week here and looking forward to tomorrow.”

In Division 4, Tim Campbell racked up his first win, the Victorian’s Corby 25 coming into her own in the first windward/leeward race. With only two seconds between them, he beat the much touted Calypso Magic, the Farr 30 owned by 16 foot skiff whizz, Graham Turner, who put in some practice at the preceding Airlie Beach Race Week.

On the other courses, SeaLink Spinnaker Division 1 was first off and Greg Snowball’s elegant Swan 60, Dream Catcher III, made the best of the start along with Paul Ley’s Kaufman 58, Pilgrim, from NSW.

However, despite the shifty and fluctuating breeze, Dream Catcher sailed away from the rest as the wind dropped out. She was first to set a kite while still on the way to White Rock when a light sea breeze started to fill in. Once around the mark, Snowball took a leg out from the shore and further distanced his boat from the others in Division 1.

The Melburnian said dockside, “We took line honours win (to finish fourth overall). We kept the boat moving the whole time, sailing with a cruising main and headsail. Winds ranged from five and a half knots to a maximum 10. We held our chute OK going to White Rock. Nobody got near us after that,” said Snowball, who has all but three Victorian crew aboard.

“She’s a lovely boat,” he said of the German Frers Swan he purchased in the States 12 years ago. He raced her in Europe before bringing Dream Catcher III to Australia. “And it’s a lovely place to sail. The scenery is fantastic – we saw a turtle while racing. It’s our first time here.

On Biddy Hu II, a Beneteau 49, owner Paul Lindemann and named for sons Boyd (Biddy) and Hugh, he said they were having a great time at Race Week. “You come here to enjoy and relax – and it’s so friendly. If you win, you celebrate with a few beers, if you don’t, they’ll still be cold tomorrow.”

Lindemann continued: “Good breeze at the start, but it dropped out. We kept moving though. The Living Doll kite is a beauty; we can carry it as an asymmetrical because it has a large luff.” They finished seventh today – the division was won by Kenny Bruce’s X562 Moo (Qld).

Divisions 2, 3 and 4 followed, along with the multihulls, with the Sharon Ferris-Choat skippered trimaran, Ave Gitana, leading the way again, but their race was won by Mistress (Dennis Coleman (Qld).

It was painful viewing at times. Just as the fleet would get going, using the land to bounce off on the way to White Rock, the breeze would die down to a whisper, leaving helms and tacticians to work out the best plan of action.

Next up is the much anticipated Around the Island Race, scheduled to start at 11am tomorrow. It is a spectacle that can be enjoyed from all points of Magnetic Island.