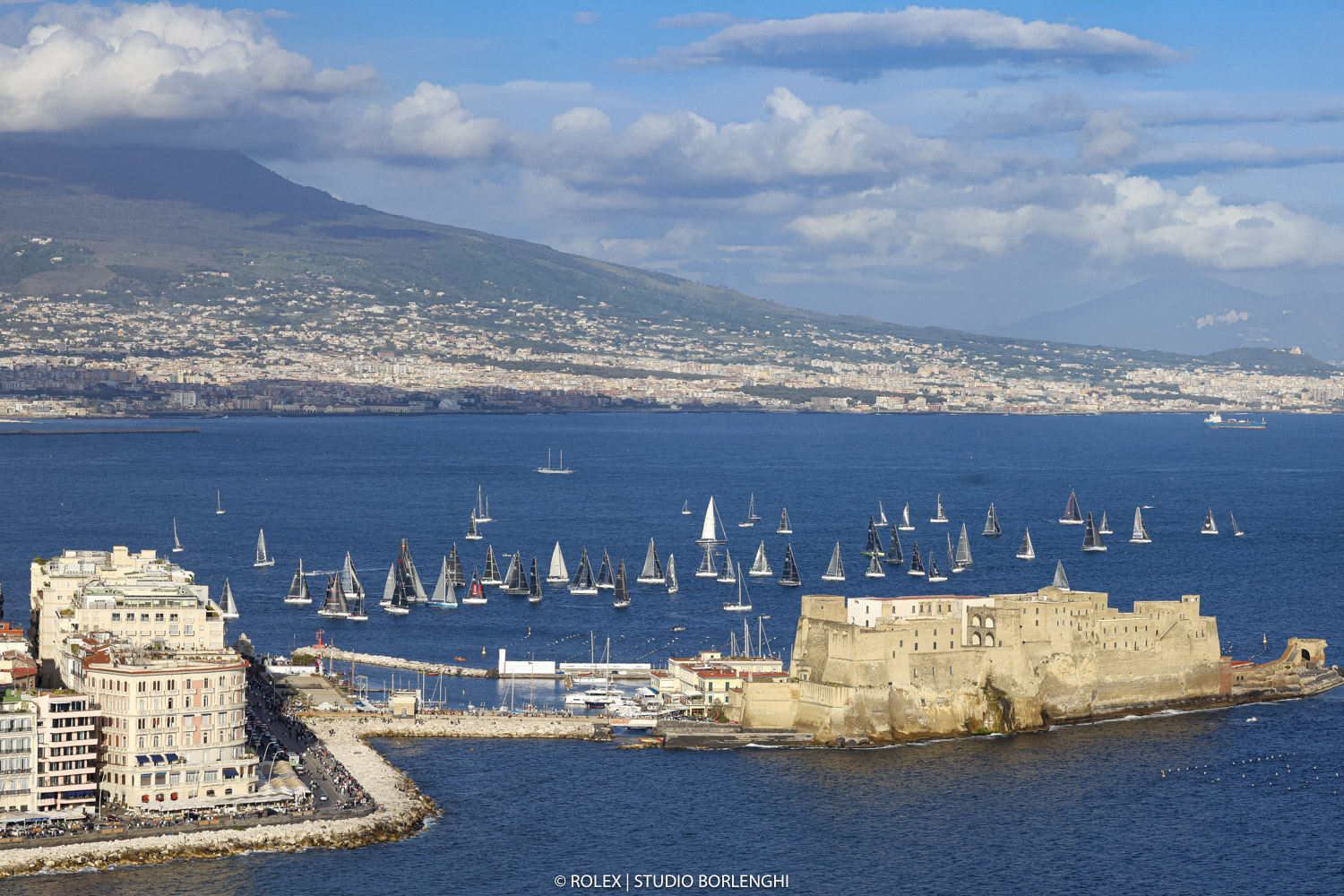 Supported by Rolex as Official Timepiece, the IMA Maxi European Championship is organised by the Circolo Remo e Vela Italia under the patronage of the Italian Sailing Federation (FIV) and in cooperation with Yacht Club Italiano, Reale Yacht Club Canottieri Savoia and the IMA.

The maxis will set off from Naples’ Porticciolo di Santa Lucia, home to both the historic Castel dell’Ovo and the Circolo Remo e Vela Italia’s clubhouse at 1900 on Saturday.

Through 155 nautical mile course, the fleet will head north through the bays of Naples, Salerno and Gaeta, around Ponza and then south, where they can leave Capri to port or starboard. The maxis will continue on to the Li Galli rocks and the turning mark off the Amalfi coast, returning via the south side of Capri, to the finish off Marina Grande.

Leading the fleet will be the Furio Benussi-skippered 100 footer ARCA SGR. Nipping at her heels will be the Reichel/Pugh 82, Highland Fling XI, which was dominating her class at last year’s Maxi Yacht Rolex Cup, until she suffered a broken forestay.

Tactician will be South African former America’s Cup skipper Mark Sadler. While he previously competed here in the Rolex Volcano Race, this will be his first Regata dei Tre Golfi.

“The race looks pretty exciting, but it will be a light air race and pretty tough. If there is any reaching it would be good for us. We’ll just see what we get and figure it out,” Sadler said.

Standing in for tactician Hamish Pepper on Lyra is Australian two-time Olympic medallist, Mitch Booth, who is aware he has large shoes to fill. Booth has previously competed in the Regata dei Tre Golfi on the Cookson 50 Kuka 3.

“I’m familiar with the course and it looks alright for us. It is a very localised breeze. At the start, the bay can be anything and around the islands it can be something different again,” Booth said.

“From my experience there is a lot of stop and start, so we’ll come and see how it runs. I think it’ll be a game of patience, a game of tactics. Fortunately, the guys know the boat pretty well,” according to Booth, who says their routing has them currently taking 48 hours to complete the course.

For Alessandro Del Bono’s Capricorno, this will be the first event of the season having undergone a substantial refit in La Spezia over the winter. The team arrived in Sorrento this week and has been training since.
This will be Capricorno’s first Regata dei Tre Golfi although most of her crew have done it many times previously on other boats, says tactician Flavio Favini.

“I have wonderful memories – it is a really nice race,” Favini said. Favini forecasts it to being a long one due to “light winds – overnight on Sunday may be very, very slow, but let’s hope for some good breeze in the early afternoon. I have heard people expecting to reach the finish…by Monday. I hope it will be faster.”

Sir Peter Ogden’s 77ft Jethou has competed in the Regata dei Tre Golfi before and as the sole ‘former Maxi 72’ taking part in the offshore part of the Maxi Europeans is also a strong favourite for overall honours.

Some of the smaller boats cannot be discounted. Giuseppe Puttini’s well sailed Swan 65, Shirlaf, may be the oldest boat competing but won last year’s edition of the race under IRC corrected time.

Remarkably International Maxi Association President Benoît de Froidmont’s Wallyño will have a rare encounter with another Wally 60 in Argentinian Lucas Massa’s Boabunda. However Wallyño comes with a stronger racing pedigree, including having won the 2019 edition of the IMA Mediterranean Maxi Inshore Challenge in 2019.

“This is the first regatta for Wallyño this season after finishing a major refit,” says de Froidmont. “Based on the entry list, I can confirm that the fleet will be extremely competitive and I look forward of it. The whole team is ready and so am I.”

His old rival, Frenchman Jean-Pierre Barjon, whom he narrowly beat in the 2019 IMA MMIC returns. This time it will be aboard his newly acquired Botin 65, Spirit of Lorina (ex-High Spirits).

de Froidmont continues, “It’s a great pleasure to see the enthusiasm of the maxi fleet for this event. With so many competing in the Regata dei Tre Golfi and the Maxi Yacht Sorrento Trophy, the IMA Maxi European Championship will be one of the most successful events in the Mediterranean.

“It is the result of a long term collaboration between our association and the organisers. As President of the IMA I can only be proud of this. Good luck to every competitor.”