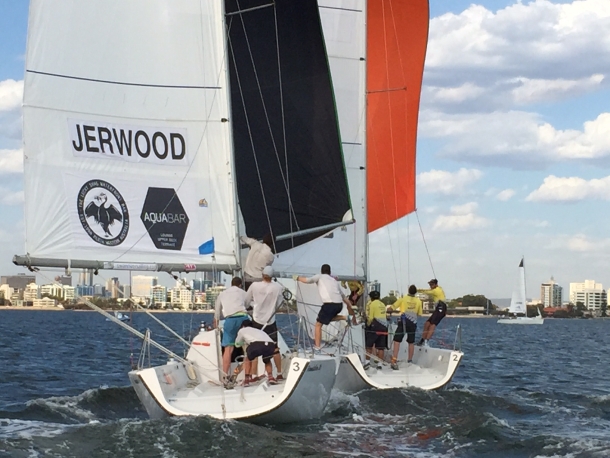 Perth based skipper Matt Jerwood made a strong opening on the first day of the Warren Jones International Youth Regatta today on the Swan River, winning his first six matches, before suffering two losses, but retains the overall lead.

The young skipper and his team, who last week won the Australian Match Racing Championships, commented, “it was a long day, but it was nice to have six wins to start the regatta. We lost the last two races, which was a bit frustrating, we were really tired. It was a solid first day and we know what we’ve got to do tomorrow.”

The American team led by Peter Holz from Chicago claimed second place on the leaderboard, despite being without their skipper. Holz was delayed en-route by cancelled flights and missed connections, so crew member Jordan Reece took over the helm and steered the team to a five win, two loss scoreline.

When the skipper touched down late in the afternoon and discovered his team’s success, he quipped, “I’d better go straight back to the airport and leave them to it.”

Being sailed on Perth’s Swan River, the event is being hosted by the Royal Perth Yacht Club, and organised by Swan River Sailing.

The twelve teams competing were subjected to a variety of wind conditions to compliment the constant heat, which remained around 38 degrees C for most of the day. The morning easterly breeze was fitful and shifty, with the gust feeling as if they came straight from a blast furnace. After a windless lunchtime interval, a steady but weak seabreeze established itself, but provided little relief from the heat.

The regatta continues until Friday.