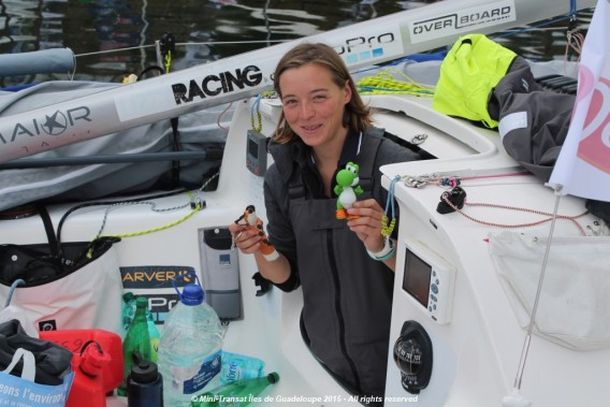 At the start of most offshore races, sailors often take mascots, amulets and objects for good luck that will remind them of their ties with land, their family and friends. The Min Transat îles de Guadeloupe is no different. At the same time, for many sailors, they take weight-saving measures to the extreme, and get rid of any superfluous objects that they can.

With just a few days to go before the start of the race, the pressure is rising on and around the pontoon. Things are getting busy with boat christenings, race briefings and final technical and safety checks. This morning, Carl Chipotel entrusted the christening of his Pogo 2 Guadeloupe to his 6-year old daughter. Celia smashed the traditional rum bottle from Guadeloupe on the bow of the boat whilst the Région Guadeloupe made final preparations to their boutique on the quayside; selling typical island produce including banana spiced foods and the inevitable island rums offered by the sponsor, Longueteau.

Final details are being seen to on board the Minis. The boats need to be race -ready by this evening and the sailors need to finalise the small final details. It is the perfect time to look for small talismans and mascots which, whilst not of critical importance for racing might be of huge psychological help.

Some of the sailors would not consider leaving without their special good luck amulet, one they have taken with them on races over the years, whilst on the whole, most skippers are down to earth and preoccupied with finding the ultimate ways of reducing weight.

For many, it will be their first experience of true solitude, the first time where they have to handle everything all alone. Divided between trying to find things that they need to pass the time, keep warm and reduce the amount of time spent at sea, most will opt for a simple photograph stuck up or an encouraging felt tip message written on the cockpit. However, in general, more and more of the sailors just say that they do not need anything to distract them and that they can wait for Lanzarote or Guadeloupe to pick things up again.

Of course, there are the diehards, those who have no intention of leaving without their favourite stuffed animals, their amulets or even without having stuck to traditions of ancient times. Nacho Pastigo (Vamos, Vamos), whilst not intending on taking particular objects, has kept a tradition he learned in the navy, placing an old coin at the base of the mast to ward off bad luck.

On the other end of the scale, others take on a whole animal kingdom. This is the case of Nikki Curwen (Go Ape – Live life adventurously) who keeps King Louis at her side, her monkey, a turtle and Howie Tucker the hippopotamus. There is enough there to keep conversation going on the Atlantic crossing stage of the race.

Mathieu Bourdais (Tous au Large) inherited an acrobatic monkey and koala. There is also the foam Minion that the skipper explains serves no purpose except being soaked in water and adding to the weight of the boat! Others try to keep their sponsors’ products depending on their needs. This is the case of Charly Fernbach (Le Faufiffon Hénaff) who has two entertaining stuffed pigs to keep him company.

But the prize goes without question to Nicolas d'Estais who takes his toy rabbit, Jimmy. Thank God some people do not believe in bad luck!

What the skippers have to say:

Charly Fernbach (Le Fauffiffon Hénaff) carries two stuffed Hénaff pigs
“Initially I was looking for things I could use to put in my videos, I found these funny pigs. Back home, my daughters immediately adopted them! They have become their little comforters, they sleep with them, give them little worlds and when I go on the race, they lend them to me, that's the deal and there is magic because they have become my daughters’ little pets and so give me a big boost! It is just great.”

Lizzy Foreman (Hudson Wight) takes Yoshi the dinosaur and a fox on board
“When I was little, I was a big fan of Mario, the game … So, Yoshi is the reward if I manage to finish the game! It should help try and finish the game on the crossing too. And I have the fox because I love the Little Prince. “

Edouard Golbery (Les enfants du canal): a pair of old boxing gloves
“My boxing coach gave me them to motivate me when I told her that I was going on the Mini Transat. “This is so you keep your fighting spirit to the end”, she said. These are two very different sports, one is explosive, the other requires a lot of endurance, but I believe in these things.”

Mathieu Bourdais (Tous au large): a magnetic acrobatic koala and monkey and Dave the Minion
“I love this stuff! I have given things to people lots of times. It is therefore quite natural to find them on board. They adapt to all situations: when the boat heels, they stay in their place on board! And then there's Dave, with big eyes … I worry that I might fall on top of him and hurt him!