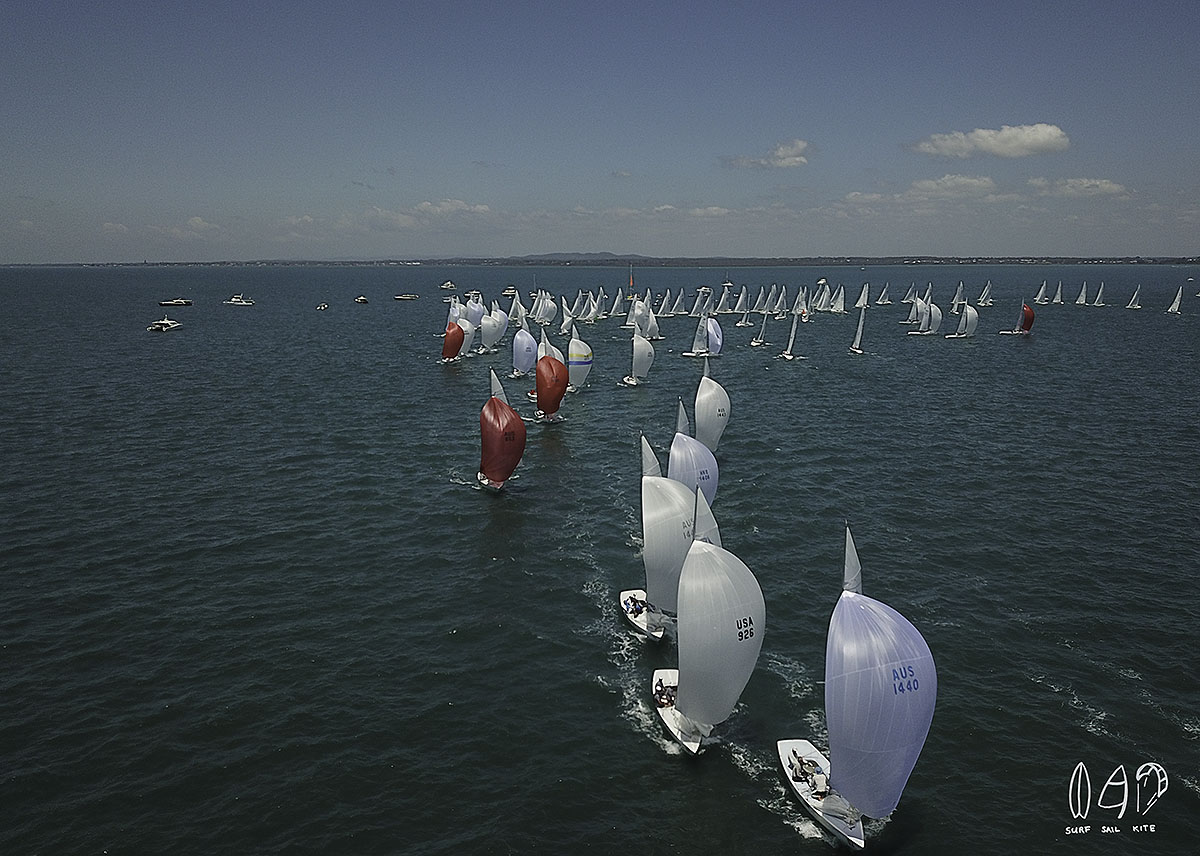 Australia’s Martin Hill and his crew of Julian Plante, Sean O’Rourke and Mat Belcher have out-sailed a class international fleet to win the Etchells Worlds on Moreton Bay in Brisbane, holding on to their overnight lead and maintaining composure in light airs on the final day to claim the title.

On the final day, Hill, an outstanding one-design sailor, won Race 8 and finished sixth in Race 9 to win the Worlds by a huge margin of 17 points from Hong Kong’s Racer C, skippered by Mark Thornburrow The Matthew Chew skippered Gen XY (AUS) was third.

Best known as a Farr 40 sailor, with four national titles to his credit and a second place at the 2014 Worlds, Hill changed direction in 2017, deciding to give the Etchells class a crack. Any sailor worth his salt will tell you it is the hardest class to win a state, national or world title in and very rarely does a crew repeat victory.

“It’s very nice to hear those words, World Champion,” Hill said. “It is something we didn’t expect. We knew we had a good team, but it’s a pretty tall order to arrive here with a fresh team and against this sort of fleet, but we worked it together. We felt the chemistry was right, so we improved as the series went on.”

Hill continued: “Even today when we started as leader, we knew that it was so easy to be first one day and 50th the next in a fleet like this.”

The Sydney sailor contested his first World’s in the Etchells last year in San Francisco, and came away with sixth place from 51 boats.

“From my perspective, our sixth at the World’s was way above my expectations. The most pleasing thing aspect of our result was our continued improvement and development as a team each day and that we had lots of support from fellow Etchells sailors, which we valued,” he said at the time.

With a refreshed crew, inclusive of 470 Olympic gold and silver medallist, Mat Belcher, the well-respected sailor was of course thrilled to sail well in light 7-9 knot winds to beat a host of former world champions in the class including, John Bertrand (finished fourth), Jud Smith (USA), Peter McNeill (AUS), Tom King (AUS) who is also an 470 Olympic gold medallist.

They also beat a number of past champions in other disciplines in the 94-boat fleet representing Australia, Hong Kong, Great Britain, Nigeria, Bermuda, USA and New Zealand.

Hill has long reminded himself that consistency is the key – and the Lisa Rose crew was consistent, straying outside of top six places only once – a discarded 49th.

Describing winning Race 8, Hill said: “We started in the middle in that first race, and tacked on the shifts, which had us around the weather mark in third spot. We did well on the run to make it up to first place, which was important given we had a weakness in that area earlier. So then we hung onto that lead for the race win.”

“It was fantastic, but there was the matter of the next race. And whilst there was a buffer of 17 points to the next competitor, we were ultra-aware that you could lose that much faster than you could gain it.”

The Sydney crew took the best option in the final race, covering, rather than going for the win. It paid off.

Lisa Rose had an amazing support team of family and friends, including AST Coach, Michael Blackburn. “I could hear them cheering at each mark rounding and it is wonderful to share it with Lisa, the kids and grandchildren.”

All information and full results: https://2018etchellsworlds.org