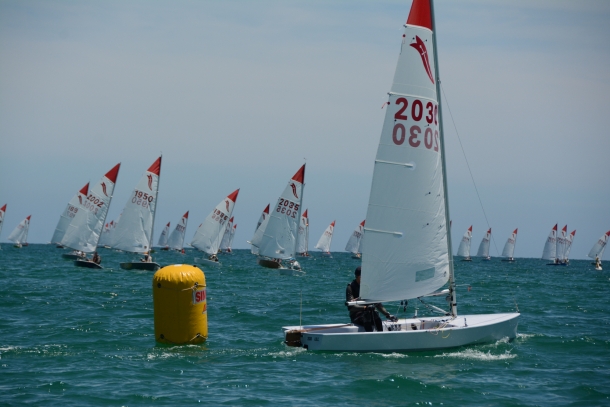 Mark Soulsby from Adelaide has taken out the Australian Championship in the Sabre dinghy class.

A fleet of 86 contested the 37th National Sabre Championship over a full range of conditions at the Adelaide Sailing Club, West Beach over Christmas/New Year.

The championship saw some extreme weather fluctuations following the New Year’s Day lay day with the abandonment of the race on 2nd January due to drifter conditions while the following day the weather turned with a south westerly front hitting the fleet midway up the first beat causing about half the fleet to capsize and working rescue crews overtime.
Some boats ended washed up on the beach several hundred metres to the north but fortunately there was only minor damage and all crews were safely accounted for thanks to the work of rescue boat crews.

A good number of skippers managed to handle the unexpected 25 to 33 knot south westerly to finish the heat but racing was abandoned for the remainder of the day.
The final day of the championship series saw three heats scheduled and a much more friendly 10-15 knot south/south easterly and with several boats going into the day’s racing still having a chance to take the title.

For Mark Soulsby two wins in the first two races that day and a 3rd place in race three  was enough to give him the championship getting the monkey off his back having twice finished runner-up in the National Sabre titles.