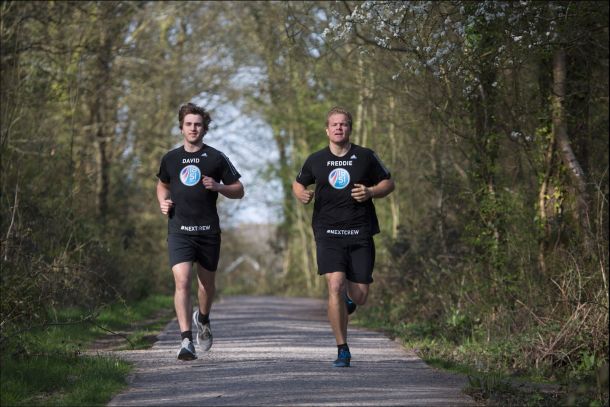 Ben Ainslie Racing (BAR) team members will spring into action later this month to take part in the first fundraising initiative of 2015; running the London Marathon on behalf of the team's official charity, the 1851 Trust.

Volunteers from BAR, the team to bring the America's Cup home to Britain, have stepped forward to take part from departments across the team – sailing, design and support – and across a range of fitness levels. Sailing team member David 'Freddie' Carr will be running his third marathon and looking to achieve a personal best by coming home in under four hours – Freddie ran the marathon in 4:15 in 2004; and then bettered that with 4:04 in 2006.

The design team have plans to derail Carr's moment of glory, and take the opportunity to challenge the sailing team by beating him home. Philibert Chenais and David Markey have both been doing some serious miles, pounding the pavements of Portsmouth to get ready for the big day.

Sarah Alexander, BAR's Press Officer will be upholding the honour of the team's 'backroom' boys and girls, and – while she is not expecting to set any records – like many thousands of others, determined to complete the course.

The team hope their efforts will not only raise money, but also raise further awareness of the 1851 Trust, which was launched in October 2014 and has the Duchess of Cambridge as the Royal Patron. The Trust aims to inspire and engage a new generation through sailing and the marine industry, providing young people with the education, skills and training to become innovators of the future, and stewards of the marine environment.

The funding raised by the team will go towards developing a new interactive and innovative Visitor Centre in the team's Portsmouth HQ, opening late 2015, as well as creating new opportunities for young people within the marine industry.

Alasdair Akass, CEO of the 1851 Trust on the charity's first major fundraising activity “It's really heartening to see all sections of the Ben Ainslie Racing Team coming together in support of the 1851 Trust. Our charity is in its infancy, so every penny they raise will be especially important to us as we work towards opening a world-class visitor attraction at the BAR Team HQ and create new and exciting opportunities for young people to get the very most out of the marine environment.”

Those keen to back the team's effort in the London Marathon can do so through a Virgin Giving page: HERE

Everyone that donates will be entered into a prize draw to win one of three exclusive summer tours of the team's new Portsmouth headquarters – which will be a showcase for sport, innovation, technology and sustainability – hosted by the one and only David 'Freddie' Carr. Each visit will be for two people.