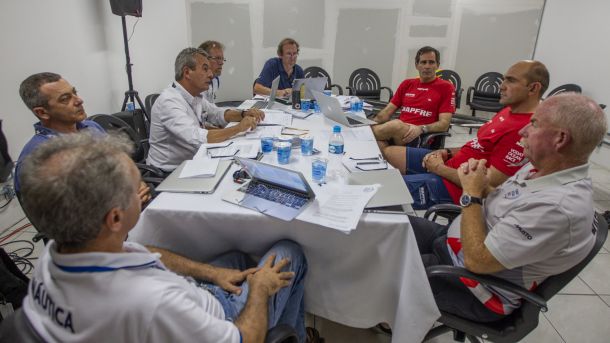 ITAJAí, Brazil, April 17 – The Spanish team MAPFRE were given a two-point penalty on Thursday by the ISAF-appointed independent jury for rules breaches during Leg 5 of the Volvo Ocean Race. In separate decisions, the jury made key rulings about the use of replacement sails for three teams.

After hearing evidence from Race Management and the team on Wednesday, the jury, headed by Bernard Bonneau, ruled that the Spanish team had applied repairs and alterations on the hull and on an outrigger without informing the Volvo Ocean 65 Class Authority (VCA) and therefore broke the Volvo Ocean 65 class rules as well as the race rules.

The Volvo Ocean 65 class rules require that if a team considers that a repair is necessary, it shall inform the VCA immediately.

Bonneau added that the five-strong jury had decided that the work was not done with the purpose of improving the performance of the Spanish team during Leg 5 and their second place in the stage stands.

The ruling, however, means that their overall points total is now 20 after five legs and they thus drop from fourth to fifth in the standings (see panel above).

The team had earlier argued in the hearing through their rules advisor, Luis Sáenz Mariscal, that in both cases with their bow and outrigger, skipper Iker Martínez had made the reinforcements because of fears that both were damaged.

Sáenz Mariscal added that the outrigger had broken on previous occasions in the race and the crew had heard a bang from the bow and feared it was delaminating.

He said that in Southern Ocean conditions, Martínez feared that the boat and crew were in danger if the measures were not taken. He said the crew had not informed the VCA, but had openly shared video content showing repairs to Race Control in Alicante, Spain.

Martínez was also a skipper in the last edition in 2011-12, when his boat’s bow delaminated and he was forced to nurse the boat to Argentina for repairs.

In a separate decision by the ISAF Jury, Dongfeng Race Team (Charles Caudrelier/FRA) was given permission to replace their damaged race mainsail with their pre-race mainsail for the forthcoming Team Vestas Wnd Itajaí In-Port Race as well as Leg 6, which starts on Sunday (April 19).

Dongfeng Race Team had nursed their boat to safety in Argentina after the top of the mast fractured, 200 nautical miles from Cape Horn, during Leg 5. Caudrelier explained they had no option but to cut the mainsail to prevent further damage, potentially endangering the crew.

However, similar applications from Team SCA (Sam Davies/GBR), to replace their fractional code zero sail, and Team Vestas Wind (Chris Nicholson/AUS) to replace their J3 when they return to the race following their grounding on a reef in Leg 2, were denied.

Team SCA’s sail was unusable during the stage after it was badly damaged during a Chinese gybe. It has since been repaired but according to skipper Sam Davies, may tear again once the boat returns to sea on Leg 6 from Sunday.

The international jury’s full decisions can be found here: http://noticeboard.volvooceanrace.com