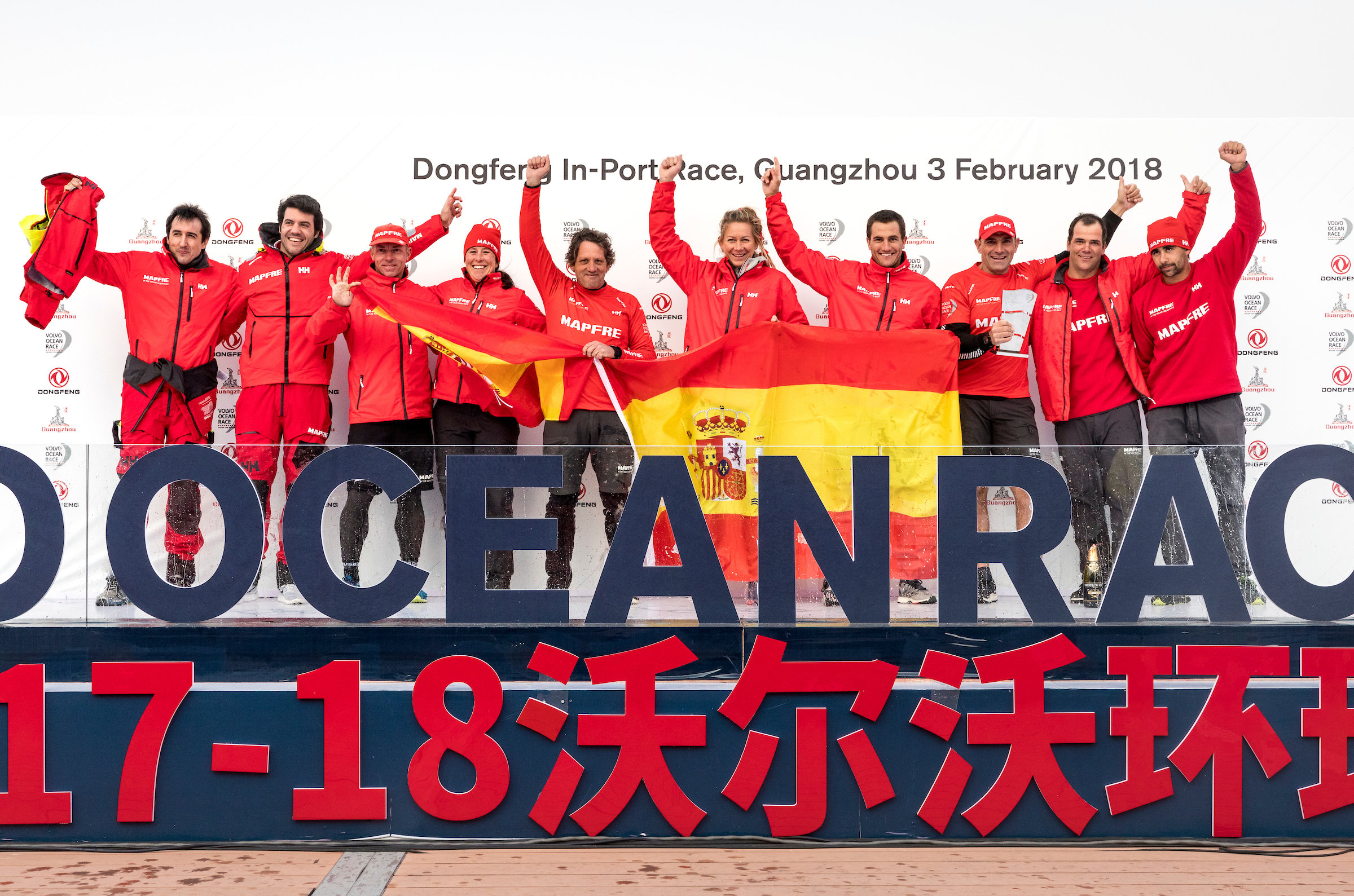 After winning the Guanzhou, China, in-port race, MAPFRE, skippered by Xabi Fernandez, is now at the top of the leaderboard for the Volvo Ocean Race In-port series, and with a five-point advantage.

It proved to be a very fast race indeed. In less than 46 minutes, MAPFRE had claimed an authoritative victory of the In-port race in the waters of Guangzhou, southern China, which was disputed today in the Pearl River, alongside the famous Humen Bridge.

Cantabrian sailor Pablo Arrarte was back at the helm of MAPFRE, as per usual in the in-port races, for the start at 15:10 local time (8:10 hora in Spain).

The team opted for the mark end, whilst AkzoNobel and Brunel preferred the right. Dongfeng and Scallywag were forced to take penalties for being early over the line, which proved particularly unfortunate for the local Dongfeng, which became entangled in the anchor line of the start mark, losing valuable time in removing it.

The Spanish team headed straight for the first mark of the course in first place, sailing with 10 knots of wind, and progressively increasing their distance over the rest of the fleet, to eventually establish a firm lead, which they held onto throughout the four laps of the course.

Xabi Fernandez’s crew were able to read the race course to perfection; with constant shifts and changes in wind intensity from the very beginning, keeping the fleet on their toes and attentive to the slightest alterations and the best areas of pressure.

MAPFRE continued to increase their lead throughout the race, soundly dominating the fleet, with no options for their rivals.

The Spanish team, led by the Basque two-time Olympic medallist, finally completed the race in just over 45 minutes, with an advantage of one and a half minutes over second-placed Team Brunel, skippered by Bouwe Bekking. Behind them, the podium was completed this time by Simeon Tienpont’s Team AkzoNobel, finishing two and a half minutes after the Spanish.

This is the second victory for MAPFRE in the In-Port series of the round-the-world race. Sailing under the flag of the Real Club Náutico de Sanxenxo, MAPFRE was also first on 14th October in Alicante, and finished second in Lisbon, Cape Town and Hong Kong.

The new triumph in Guangzhou, establishes MAPFRE as leader of the general scoreboard for the In-Port Race Series. MAPFRE had been tied first place at 25 points with the leader, local team Dongfeng. However, today’s victory has broken the tie, and placed Xabi Fernandez and his crew once again at the top of the leaderboard with a five-point advantage over Charles Caudrelier’s team in second, and nine points ahead of Team Brunel in third.

“We are really happy with the result, as it was a complicated race. It was a short course, with just four laps, and we were able to start ahead, and keep increasing our lead. We managed to stay in tune with the shifts and current,” Fernandez said.

“It was obviously a tough day for Dongfeng, which had problems at the start, and was early over the line, forcing a re-start.

“This victory puts us ahead on the general scoreboard once again for the In-Port Race Series, which of course has relative importance. We will all have good and bad races, and today was a good one for us. We hope it continues,” he finished.